At its launch, the car placed Ford ahead of the pack, being unusually modern in terms of the bits that showed. It was one of the first new cars to appear in Germany since before the war, and featured a radical ponton format “three box” body as pioneered (at least in Germany) by the 1949 Borgward. The three-box car body format would soon become mainstream, but when the Ford Taunus 12M appeared in 1952 competitor manufacturers including Opel, Volkswagen and Auto Union were still competing with models based closely on designs originating in the 1930s. 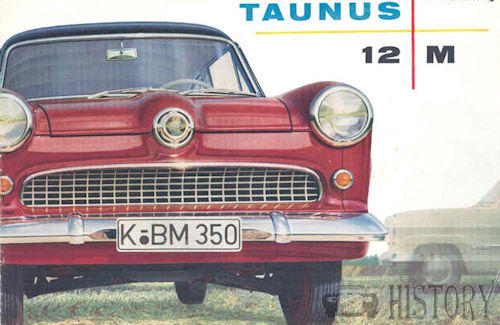 Planning for Ford Germany’s new ponton bodied passenger car began in 1949. Several aspects of the car’s development reflected the advantages and the disadvantages of running a business with management decisions necessarily split between two continents at a time when even international telephone calls needed to be pre-booked.

The original plan for the strikingly modern design came from Ford in the USA who drew up a proposal based on the ponton format Champion model introduced to the US auto-market a few years earlier by Studebaker. The Studebaker design had already proved highly influential on the domestic programs of mainstream US auto-makers. Cologne based production engineers adapted the US proposal for the German market. The Studebaker featured a large roundel directly above the front grill on which was displayed the propeller of an airplane. The Ford Project 1 also featured a prominent roundel at the front of the car, but in place of the Studebaker’s propeller design, the Ford roundel featured a hemispherical depiction of half a globe. This bold and unusual decoration led to the new car becoming known as the „Weltkugeltaunus“ (Globe Taunus).

The naming of the car is another area which may have been complicated by the way that responsibilities were shared between different management teams in two continents divided by an eight-hour time difference and the Atlantic Ocean. The immediate postwar era was seen as a new beginning for a newly divided Germany with, in the west, new borders, a new constitution and a new political class. The monocoque bodied new model for 1952 also represented a new beginning for Ford, so identifying it as Ford of Germany’s Project 1 (P1) was evidently uncontentious.

During development it was intended that the car would be powered by a 1,498 cc engine. This was in many respects the engine that had originally been intended for the previous Ford Taunus first produced in 1939, but now it was to be developed into an ohv unit. However, cost constraints intervened, and when the new Taunus 12M appeared in 1952 it was powered by the 1,172 cc side-valve unit that had powered not merely its predecessor, but also its predecessor’s predecessor, the Ford Eifel of 1935.

By 1952 sidevalve engines were already seen as old fashioned. In an analysis undertaken of the models shown at the 1952 Paris Motor Show it was noted that 48 of the cars exhibited were fitted with engines employing overhead valves while only 6 featured sidevalve engines. That Ford were still powering their entry level Taunus P1 with a sidevalve engine ten years later, in 1962, would leave the model looking badly outclassed under the bonnet/hood.

The body and running gear

The two-door modern slab sided Ford Taunus that appeared in January 1952 with an old fashioned engine married to a stylish new body was connected with the road using fashionably small 13“ wheels which will have saved on cost and maximised the space available for passengers and their luggage. Individually suspended front wheels marked a contrast with the approach taken with the original Taunus, but in 1952 the rigid rear axle was all too familiar to Ford’s existing German customers. The old Taunus had acquired the option of a four-speed gear box in 1950, but the new model at its 1952 launch came only with the older three-speed box, controlled using a column-mounted lever. (Until the 1960s European cars in this class never offered the option of an automatic gear change.) In the early years all the cars, regardless of equipment level, and whether saloon/sedan, or cabriolet bodied, came with a single bench seat across the full width of the car in place of the individual front seats fitted by most European manufacturers: this was a matter in respect of which the Taunus 12M was seen to reflect it’s manufacturer’s North American parentage and thereby conferred a certain glamour at a time when the USA was a widely accepted role model across much of Europe and especially in West Germany. 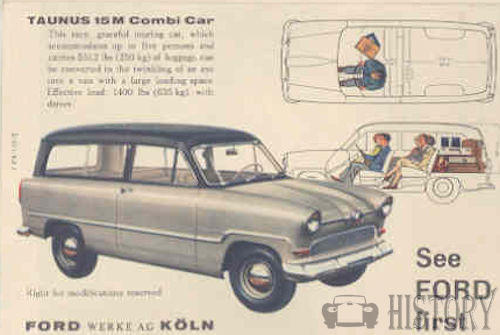 In 1955 the Taunus 12M received its first facelift. The formerly split chrome grill was replaced by a simplified single piece grill. The prominent hemi-spherical globe design above the grill at this time remained in position, however. By now the base price for the Ford Taunus 12M had been reduced to below 6,000 Marks, and with incomes on the rise nationally the stripped down Ford Taunus 12 was quietly dropped from the range.

In 1958 the wide chrome bars of the radiator grill were replaced by a less flamboyant grill. But the globe design directly above the grill lasted another year. 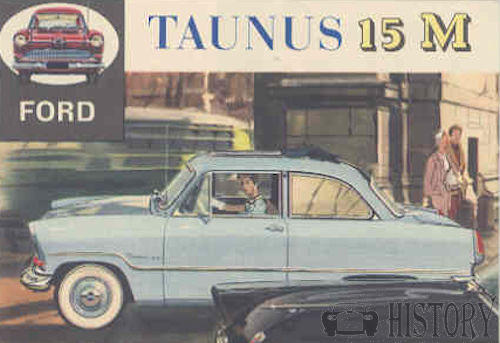 Early in 1954 the Ford Taunus finally received the 1500 cc engine that had been planned for successive Taunus models ever since 1939. Hitherto the Ford Taunus 12M had competed as a large (if rather underpowered) car in the sector increasingly led by the Volkswagen Beetle. Its size had always invited comparison with larger cars such as the Opel Olympia Rekord, the Borgward Isabella, the Fiat 1400 and the Peugeot 403. What these cars had in common, however, was an engine of approximately 1500 cc, which was something that till now the Taunus had conspicuously lacked.

Ford in Germany did not have the investment cash available to develop a new model of their own in the rapidly growing market segment of middle-sized (by the standards of the time and place) family cars, but by installing a 1498 cc engine in the Taunus 12M they were able to announce almost as a new car the Ford Taunus 15M which could be profitably produced and sold alongside the car with which it shared virtually every component apart from the engine block and cosmetic touches, including a strongly differentiated front grill, intended to emphasize the differences between the cars to potential customers.

The new engine was based on the unit that had originally been developed with a side-mounted camshaft for launch in the 1939 “Buckeltaunus”. Now, however, the originally planned side-valve configuration was replaced, for the first time on a German Ford, with an overhead camshaft. This reflected developments also underway in England where a new ohv-engined Ford Consul had appeared in 1951. The crankshaft on the new German Ford engine was formed from tube rather than from a solid casting, which was seen as a way to save weight.

The Taunus 15M was offered with exactly the same choice of bodies as the 12M. It was also offered with the option of a "Saxomat" automatic clutch, married to the three-speed gearbox (though not with the four-speed box). 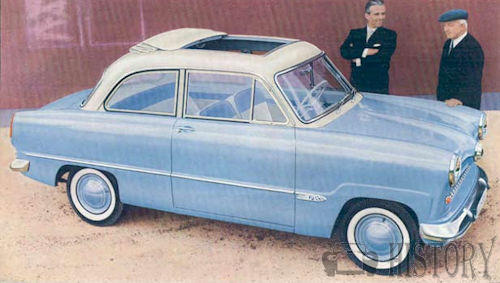 By 1959, Ford’s US management had decided that the earlier policy of selling as separate models the Taunus 12M and Taunus 15M no longer made sense. This was partly in response to the lack of effectiveness with which the 15M model had been competing against Opel. General Motors were evidently cash rich at this time and Opel, between 1953 and 1957, offered an extensively redesigned or upgraded version of their Opel Olympia Rekord every year, and were dominating the middle-weight sedan sector of the German auto market. However, another important game changer had been the introduction in 1957 of Ford’s second new post-war model, the Project 2, known to customers at the time as the Ford Taunus 17M. The larger and flamboyantly styled Taunus 17M was seen as a much more powerful competitor to sell against the successful Opel and against the Borgward Isabella, which acquired something approaching iconic status in the later 1950s.

For 1959, Ford’s smaller Taunus no longer needed to try to compete half a class up. The Taunus 15M was withdrawn from sale. A redesign of the front of the car saw the prominent globe symbol removed, leaving a more restrained front for the Taunus 12M which competed now without distraction in the small car category, a sector increasingly dominated by Volkswagen’s Beetle. Having lost its defining globe mascot, the smaller Taunus acquired a thick painted stripe down each side, slightly below the level of the car’s waist. It thereby acquired its “Seitenstreifentaunus” (Side-stripes Taunus) soubriquet.