In the late 1960s, Ford set about developing a third-generation Cortina, which would be produced in higher volumes than before, and following the recent merger of Ford of Britain and Ford of Germany into the modern-day Ford of Europe, the car marked the convergence of the German Taunus and British Cortina platforms with only minor differences between the two, hence the car's internal name TC1, standing for Taunus-Cortina. It was also the last European car engineered by Harley Copp as Vice President Engineering and head of Brentwood, before he returned to Detroit.

The Mark III was heavily inspired by the contemporary "coke bottle" design language which had emanated from Detroit – the car sported the same fluted bonnet design and beltline from the North American Ford LTD of the same era. It replaced both the Cortina Mark II and the larger, more expensive Ford Corsair by offering more trim levels and the option of larger engines than the Mark II. Its sister car – the Taunus TC – sold in continental Europe was subtly different in appearance, having different door skins and rear wing pressings that toned down the drooping beltline in order to lose the "coke-bottle" appearance of the Cortina.

The MacPherson strut front suspension was replaced with more conventional double A-arm suspension to give the car a soft 'freeway' ride which gave the larger engines distinct understeer.

Ford UK originally wanted to call it something other than Cortina, but the name stuck. Although the Mark III looked significantly larger than the boxier Mark II, it was actually the same overall length, but 4 inches (100 mm) wider. Within the overall length, a wheelbase lengthened by more than 3 inches (76 mm) also contributed to the slightly more spacious interior. 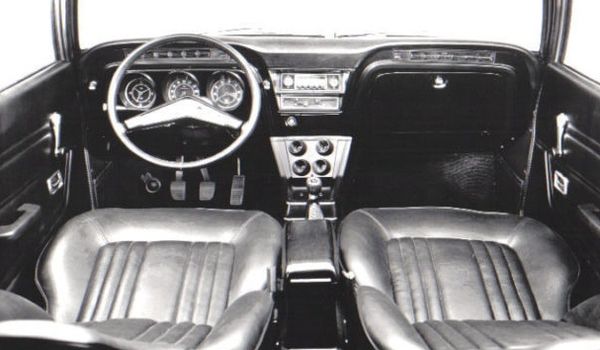 Trim levels were now Base, L (for Luxury), XL (Xtra Luxury), GT (Grand Touring) and GXL (Grand Xtra Luxury). 1.3 L, 1.6 L and 2.0 L engines were offered, the 1.6 L having two distinct types – the Kent unit for models up to GT trim and a SOHC Pinto unit for the GT and GXL, the latter of which was also offered in 1600 form for a short while. 2.0 L variants used a larger version of the 1600 Pinto unit and were available in all trim levels except base. Base, L and XL versions were available as a 5 door estate. Optional Accessories 5.5" sport road wheels with 175 x 15 tyres; servo brake; alternator; reclining backrests;

Although no longer than its predecessor, the Mark III was a heavier car, reflecting a trend towards improving secondary safety by making car bodies more substantial. Weight was also increased by the stout cross-member incorporated into the new simplified front suspension set-up, and by the inclusion of far more sound deadening material which insulated the cabin from engine and exhaust noise, making the car usefully quieter than its predecessor, though on many cars the benefit was diminished by high levels of wind noise apparently resulting from poor door fit around the windows. Four-speed manual transmissions were by now almost universally offered in the UK for this class of car, and contemporary road tests commented on the rather large gap between second and third gear, and the resulting temptation to slip the clutch when accelerating through the gears in the smaller-engined cars: it was presumably in tacit acknowledgment of the car's marginal power-to-weight ratio that Ford no longer offered the automatic transmission option with the smallest 1298 cc-engined Cortina.

Four headlights and Rostyle wheels marked out the GT and GXL versions, while the GXL also had bodyside rubstrips, a vinyl roof and a brushed metal and black tail panel on the GXL and plain black one on the GT. All models featured a downward sloping dashboard with deeply recessed dials and all coil suspension all round. In general styling and technical make up, many observed that the Mark III aped the Vauxhall Victor FD of 1967.

The Cortina went on sale on 23 October 1970, but sales got off to a particularly slow start because of production difficulties that culminated with a ten-week strike at Ford's plant between April and June 1971, which was at the time reported to have cost production of 100,000 vehicles, equivalent to almost a quarter of the output for a full year.

During 1971 the spring rates and damper settings were altered along with the front suspension bushes which reduced the bounciness of the ride and low speed ride harshness which had generated press criticism at the time of the Cortina III's launch.

Volumes recovered, and with the ageing Austin/Morris 1100/1300 now losing out to various newer models, the Cortina was Britain's top selling car in 1972, closely followed by the Escort. It remained the UK's top selling car until 1976 when it overtaken by the Mk2 Escort.

In late 1973 following a facelift, the Cortina was redesignated TD. Outside, there were revised grilles, rectangular headlights for the XL, GT and the new 2000E (the "E" standing for executive), which replaced the GXL. The 1.3 L Kent engine was carried over but now, 1.6 L models all used the more modern 1.6 L SOHC engine. Whilst the TD Cortina still had double A-arm suspension with coils at the front and a four-link system at the rear, handling was improved. Inside, the car received a neater dashboard that no longer sloped away from the driver's line of sight and upgraded trim. The 2000E reverted to the classy treatment offered by the 1600E and later Ghia models instead of the faux wood-grain trim offered by the GXL. The 2000E was also available as an estate.

Like many other Cortinas, Mk.3s were prone to rust and as a result only about 1000 now survive. Because of their rarity and the fact that they are now seen as an iconic car of the mid-70s, prices for MK.3s are rising steadily, with the best examples fetching several thousand pounds. The Mark III was never sold in the US, although it was available in Canada until 1973.

In addition to four-cylinder models, the Mark III was available in South Africa as the 'Big Six' L and GL with the Essex V6 2.5 L engine and Perana, GT and XLE with the Essex V6 3.0 L engine. There was also a pick-up truck version available. Ford Australia built its own versions using both the UK four-cylinder engines (1.6 and 2.0) and locally made inline six-cylinder engines from its Falcon line.

For Japan, the cars were literally narrowed by a few millimeters on arrival in the country in order that they fit into a lower tax bracket determined by exterior dimensions – this was done by bending the wheel arches inwards.