The Fiat 1400 is a model of car produced by Italian automotive manufacturer Fiat between 1950 and 1958. The car was introduced at the 1950 Geneva Motor Show. It was the first chassisless Fiat automobile. In 1953 the introduction of a diesel version with a 1900 cc engine marked another Fiat first, although the diesel version was known as the 1400 Diesel.

The Fiat 1900, introduced in 1952, was an upmarket model that used the same body as the 1400, but came with a 1.9 litre engine and more standard features. The petrol-engined Fiat 1900 A, introduced in 1954, now offered a claimed 70 bhp. It also featured a hydraulically operated clutch and, unusually for that time, a five speed column shifted manual transmission.

A 1400 cc model tested by the British magazine The Motor in 1950 had a top speed of 74.4 mph (119.7 km/h) and could accelerate from 0-60 mph (97 km/h) in 35.7 seconds. A fuel consumption of 24.2 miles per imperial gallon (11.7 L/100 km; 20.2 mpg-US) was recorded. The car was never sold in the UK, but the Italian market price would have equated to approximately £750 including taxes. Having eulogised the performance and "quite exceptional...top gear flexibility", British journalists went on to praise the "astonishing silence, smoothness and comfort provided by the vehicle", highlighting various "unique features designed to prevent the transmission of noise and vibration to the passengers". Great use was made of rubber and of "a sound-proofing compound...liberally coated...[on the car's]...integral structure". 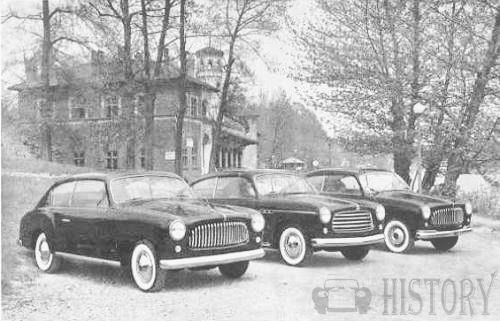