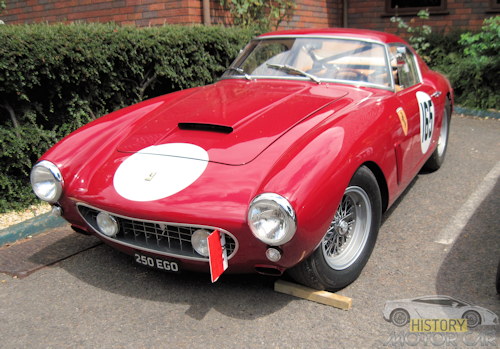 The 250 design was extremely successful on the race course as well as the street. A number of GT models were built in varying states of road or racing trim.

The first street car to use Colombo's 250 V12 was the 250 Europa GT, introduced at the 1954 Paris Motor Show. Pinin Farina's sober Paris coupe was just one of many shapes for the 250 GT line, with coachbuilt production extending through 1956 before the 250 line became more of a standardized product. The original 250 Europa GT used a 2,600 mm (102.4 in) wheelbase on a conventional chassis. The dry sump V12 was tuned to 220 PS (162 kW; 217 hp), with three Weber 36DCZ3 carburettors. Aping the Vignale's 250 Europa, Pinin Farina added now-familiar vents to the front fenders, a standard styling feature for many of the 250 GTs that followed.In total only 35 Europa GTs were manufactured.

Pinin Farina introduced a 250-based prototype at the 1956 Geneva Motor Show which came to be called the 250 GT Boano. Intended as a styling exercise and inspiration to 250 GT Europa customers, demand soon called for construction of a series of the car.

Unable to meet demand due to much needed expansion, Pinin Farina asked Mario Boano, formerly of Ghia, to handle the construction. When Fiat recruited Boano, he handed production duties to his son-in-law Ezio Ellena. With partner Luciano Pollo, Carrozzeria Ellena would produce the 250 GT for another few years. Ellena revised the car, raising the roof and removing the vent windows from the doors. Those cars became known as 250 GT Ellena

All but one were coupes. The single convertible, 0461 GT, was sold to New York collector, Bob Lee, off the stand at the 1956 New York Auto Show. At the direction of Enzo Ferrari, Lee bought the car for $9,500-far below cost. He still owns it, making it one of the oldest Ferraris still in the hands of the original purchaser.

The 250 Granturismo Berlinetta, nicknamed the "Long Wheelbase Berlinetta", was also called the "Tour de France" after successfully competing in the 10-day Tour de France automobile race, not the famous bicycle race of the same name. There were 77 Tour de Frances built. A number of 250 GT "Tour de France" Berlinettas were sold for GT races from 1956 through 1959. Construction was handled by Carrozzeria Scaglietti based on a Pinin Farina design. The engine began at 240 PS (177 kW; 237 hp) but rose to 260 PS (191 kW; 256 hp) by the end.

Scaglietti appeared at the 1956 Geneva Motor Show with their own 250 GT prototype, which became known as the limited production, Series I, “14-louvre” 250 GT Berlinetta. The first production car was built in November 1956, and production was now the responsibility of Scaglietti in Modena.

There were five series of 250 GT Berlinettas in all. From mid-1957, the Series II cars were introduced, with three louvers and covered headlights. Just 15 were produced. Series III numbered 36 cars; these retained the covered headlights but had just a single vent louver. In 1959, eight single-louver cars were built with open headlights, a new Italian requirement. Zagato also made five superlight cars.

Released at Geneva in 1957, the original Pininfarina cabriolet used the 2,600 mm (102.4 in) wheelbase and had distinct bodywork from the Berlinetta.

About 36 examples were produced before a second series was shown at Paris in 1959. These later cars had much more in common with the production Berlinetta.

About 200 of the series two cars were built.

Motor Trend Classic placed the 250 GT Series I Cabriolet and Coupe ninth on their list of the ten "Greatest Ferraris of all time".

Designed for export to North America, the 1957 250 GT California Spyder was Scaglietti's interpretation of an open-top 250 GT. Aluminium was used in the hood, doors, and trunk lid, with steel specified elsewhere for most models, though a few aluminium-bodied racing versions were also built. The engine was the same as in the 250 Tour de France racing car with up to 240 PS (177 kW; 237 hp). All used the long 2,600 mm (102.4 in) chassis.

Only 50 were ever made before it was replaced by the SWB version in 1960. It remains highly valuable for automotive collection, one example auctioned on August 18, 2007 at Monterey, California for $4.9 million. In May 2008, English broadcaster Chris Evans, set a new world record for the highest price ever paid for an automobile at auction when he paid $10,894,400 for a Spyder. The car, which was the 13th to be made, was once owned by Hollywood star James Coburn.

Desiring to enter series production in order to stabilize the company's finances, Enzo Ferrari asked Pininfarina to design a simple and classic 250 GT coupe. After 250 GT Boano/Ellena, Pininfarina Grugliasco plant was expanded and the production of a new coupe could be moved back. The resulting car was introduced at Milan in 1958, and 335 nearly identical examples were built by 1960. Buyers included Prince Bertil of Sweden. The GT Coupe eschewed the fender vents for simple and clean lines and a notchback look with a panoramic rear window. The oval grille was replaced by a more traditional long narrow look with protruding headlights. Telescopic shock absorbers were also fitted instead of the Houdailles found on previous 250s, and disc brakes were added in 1960. The final 250 GT Coupe had a Superfast tail and was shown at the 1961 London Motor Show.

In line with the high-volume coupe, Pinin Farina also designed a plainer 250 GT Cabriolet for series production. Introduced at the 1959 Paris Motor Show, the GT Spider sported a look similar to the GT Coupe of the previous year, including the removal of the side vents. About 212 were produced.

Development of the 250 GT SWB Berlinetta was handled by Giotto Bizzarrini, Carlo Chiti, and young Mauro Forghieri, the same team that later produced the 250 GTO. Disc brakes were a first in a Ferrari GT, and the combination of low weight, high power, and well-sorted suspension made it a competitive offering. It was unveiled at the Paris Motor Show in October and quickly began selling and racing. The SWB Berlinetta claimed GT class of the Constructor's Championship for Ferrari in 1961.