Built in 1968 and used in 1968 and 1969 .As a result of the well-known controversy over the regulations which fixed a limit of 3 litres for the engine capacity of prototypes, while engines of up to 5 litres were permitted for sports cars (which were practically the same but with the added condition that at least 50 had to be built), in 1968 Ferrari did not take part in prototype racing, and therefore the experimental P 5 shown at the Geneva Motor Show was nothing more than an exercise in coachbuilding.

The 612, which is powered by the largest engine Ferrari have ever made at the time, both in engine capacity and power. It is interesting to note how well this engine illustrates the technical progress that has been made for, although it is not much larger than the three-litre and no larger than the old five-litre, it can produce much greater power, with a decidedly improved power-weight ratio. The 12-cylinder mid-engine that was originally used in the Ferrari 512S. The engine made with a capacity of just 6.2 litres 620 hp. In order to achieve a sufficient grip of the rear wheels despite this performance, a powerful rear wing was mounted just behind the driver above the engine.

This car, which, had taken part in various races in the Can Am series, and the construction of this large engine is certainly the forerunner of further developments in the field of the manufacture of GT cars. The car debuted in the fall of 1968. The New Zealander Chris Amon , factory driver of the Scuderia in Formula 1 and the sports car world championship, fell out of the race in Las Vegas after a lap by accident. The entire season 1969 was only partially successful, since the Scuderia operations operate only with limited commitment. Chris Amon's second-place finish in Edmonton remained the best finish for the car throughout the season. Amon managed with the third places in Watkins Glen and Mid-Ohio, after all, two more podium finishes. 1970 followed the Ferrari 712 CanAm. 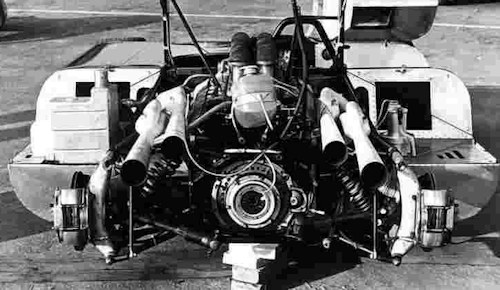