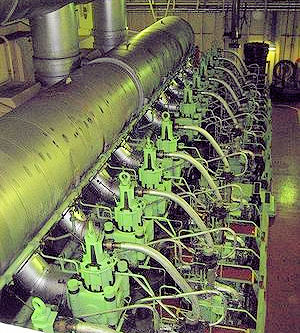 Large ten-cylinder engines are common on large ships, such as container ships. The MAN B&W 10K90MC-C (pictured) is an example of such an engine, and it is capable of developing a maximum power output of 58,600 brake horsepower (43,700 kW) at a speed of 104 revolutions per minute (rpm). Like the vast majority of marine diesel engines, it is capable of running on diesel or heavy fuel oil, the latter of which is used most often.