The Citroën Type B14 replaced the Citroën Type B12 in October 1926 . The new Citroën series was initially visually equal to the B12, but technically represented a major step forward. Thus, the chassis was much lighter and the engine had been revised. 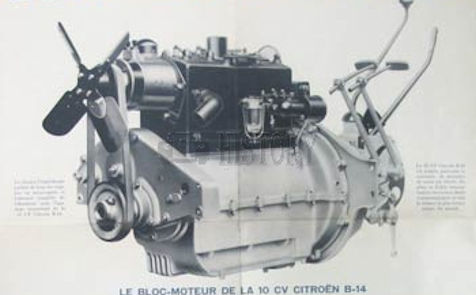 The four-cylinder gasoline engine has 1583 cc capacity with 16 kW (22 hp) power at 2300 / min. The maximum speed rose to 80 km / h. In addition to the previous 4-door sedan with 4 or 6 windows, the 2-door torpedo with 4 seats and derived from 2- to 3- or 4-seater convertible , there was also a 4-door roadsterwith removable hood. As before, a flatbed truck was available.

As of March 1927, was updated with four drum brakes and servo assistance comfortable; at the same time, a Landaulet version became available.

At the Paris Motor Show in October 1927, a luxury version with improved and embellished body of the sedan with extended wheelbase was presented, as well as a flatbed version with 1000 kg payload.