The Citroën ZX is a small family car produced by the French manufacturer Citroën between 1991 and 1998.

During the early 1990s, the ZX was Citroën's competitor in the class traditionally dominated in Europe by the Ford Escort and Vauxhall/Opel Astra, a market segment Citroën had moved away from when the GSA was discontinued in 1986.

The BX had tried to address the small family car market and the large family car market by being 'between sizes' but well packaged. In 1993 the Citroën ZX chassis was also used for the Peugeot 306 which, with its attractive Peugeot 205 derived styling, was a more successful car than its twin. The Citroën Berlingo and Peugeot Partner were also built on the same platform. European production and sales of the ZX ceased in 1998 with the arrival of the replacement Citroën Xsara.

A saloon derivative called the Citroën Elysée continued to be produced for the Chinese market by the Dongfeng Peugeot-Citroën Automobile, a joint venture with the PSA Group.

The ZX's interior space and value received praise from critics and consumers. Of particular note was the rear seat arrangement; it was mounted on a sliding platform that allowed the seat to be moved rearwards to increase rear legroom, or forwards to increase cargo space. Unfortunately, only the seat backs folded down on models so fitted. Lower specification models with fully folding and removable seats had more ultimate capacity. The ZX specification was good for its class, with most models getting power steering, electric windows, electric sunroof, a driver's side (and sometimes passenger's side) airbag and anti-lock braking system as either optional or standard equipment. It was competitively priced though, unlike the Golf which was priced at a premium.

The familiar range of PSA powertrains drove the front wheels of a seemingly conventionally designed chassis. At the front was a standard MacPherson strut layout with anti-roll bar, while the rear used the PSA Peugeot-Citroën fully independent trailing arm/torsion bar set up that was first introduced on the Peugeot 305 estate. However, PSA's chassis engineers employed some unusual features, including passive rear wheel steering (by means of specially designed compliance bushes in the rear suspension), and in-house developed and constructed shock absorbers. At high mileages this is prone to wear of the axle mounting bushes which is easily fixed. It is also prone to wear in the rear axle trailing arm bearings, which then wear the trailing arm axle tubes, requiring an expensive rebuild or a replacement axle assembly. The diesel and larger capacity petrol engines are canted as far back as possible in the engine bay, in an effort to put as much weight as possible behind the front axle line, also reducing the centre of gravity, while improving weight distribution and minimising understeer.

At the time of its launch, the ZX range consisted of a collection of four very individual trim levels; the base model was the "Reflex" aimed at young people, next was the "Avantage" aimed at families and then there was the luxury "Aura" series. The final series was the relatively sporting "Volcane" series, with lowered (and hard) suspension. The "Volcane" TD was one of the first diesel hot-hatches. Over time, further models were introduced including the "Furio", a cheaper sports model, a 16-valve-engined high performance derivative and many special editions.

The ZX was initially available as a three or five-door hatchback, while a class-leading five-door station wagon was added to the range in 1993. It was offered with petrol engines from 1.1 L to 2.0 L, as well as three 1.9 L diesel engines including a turbodiesel.

The car won the 1994 Paris–Dakar Rally, and again twice more in the following two years. 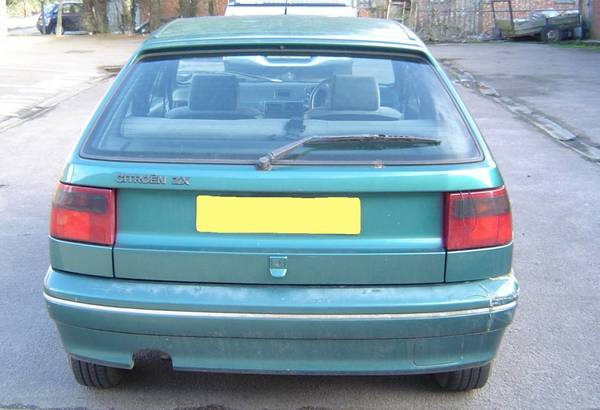