The Citroën Axel was a supermini automobile produced between 1984 and 1990 and developed in co-operation by Citroën of France and Oltcit, a joint venture company with the Romanian government.

The Axel was a rebadged version of the small Oltcit Club hatchback. Four specifications were available: Axel Club, Axel 11, Axel 11R and Axel 12 TRS. They were powered by the air-cooled engines from the Citroën GS/GSA and an air-cooled flat-twin engine from the Citroën Visa. The Axel Club was only available in Romania.

The five-door Citroën Visa and the three-door Axel look very similar, but there is no part interchangeable between these two Citroën models.

From 1965 Robert Opron worked on the Citroën G-mini prototype and project EN101, a projected replacement for the 2CV using that car's flat twin engine. It was supposed to be launched in 1970. The advanced space efficient designs with very compact exterior dimensions and an aerodynamic drag co-efficient Cd of 0.32, were axed because of adverse feedback from potential clients. The more conservative final design has a Cd of 0.36 (for the Axel 12 TRS, 0.37 for the Axel 11).

The early seventies Citroën Prototype Y, intended to replace the 2CV based Citroën Ami which dated back to 1960, was originally developed in co-operation with Fiat. It built on the lessons from the Citroën G-mini and EN101 projects. It used the then new and advanced Fiat 127 platform, featuring a transversely mounted engine driving the front wheels, with an end-on gearbox layout that Fiat had pioneered in the 1960s. When cooperation with Fiat ended, a new Citroën designed platform was planned. After the takeover of Citroën by Peugeot in the wake of the 1974 oil crisis, the renamed "Projet VD (Voiture Diminuée)" became the Citroën Visa, incorporating the floor pan of the Peugeot 104 and using the advanced 104 engine with the (under engine) transmission and chassis. It was the first new model under the platform-sharing policy of PSA Peugeot Citroën that continues today. The earlier Citroën LN was no more than a facelift of the Peugeot 104Z "Shortcut" with a re-engine and transmission from the Citroën Dyane.

Eventually, in 1981, the original Citroën platform design from "Project Y" emerged as an Oltcit in Romania, using a Citroën Visa flat-twin engine and Citroën GS based gearbox, and Citroën GS flat-four engine and gearbox. Beginning in July 1984 it was also sold in Western Europe as the Citroën Axel. Citroën was hoping to recoup money that Citroën had invested in Romania that the communist government couldn't repay. The Axel had been scheduled for an earlier introduction, but Oltcit had been unable to provide neither the quality nor the quantity expected by their French partners. This project was problematic for Citroën due to productivity and build quality issues and only 60,184 cars were made, even though the base models were priced below the tiny 2CV in Western Europe. The Axel was never sold in the UK.

When launched in France, Citroën acknowledged the fact that the Axel was a competitor of their Visa. However, the fact that the Axel only had three doors and was of a simpler, more robust design was considered enough to offset any possible loss of (already shrinking) Visa sales. The four-cylinder Axel 11 was 10 percent cheaper than a two-cylinder Visa in the French market. It also has a particularly low rear loading height, which with its sturdy, basic construction contributed to being particularly well received in with farmers and denizens of smaller towns. 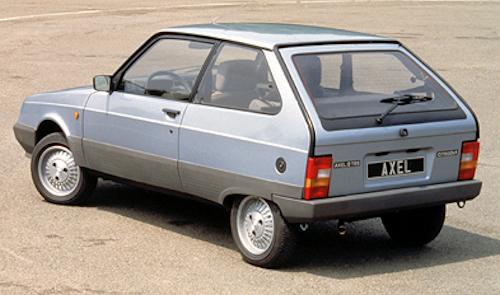