The Citroën H Van, Type H, H-Type or HY is a light truck (or delivery van) produced by the French car maker Citroën between 1947 and 1981. It was developed as a simple front wheel driven van after World War II. A total of 473,289 were produced in 34 years in factories in France and Belgium. Most of them were sold in France, Belgium and the Netherlands. They were not sold in the UK in right hand drive.

Citroen's teams worked on 8 projects and only the last one was developed, giving it its name : "H". Most Type H vans were sold as model HY. Other models include H (early versions), HX (lesser load capacity), HZ, and HW (greater load capacity). For a time they were also sold as model 1600. In France, this van is known as "Nez de Cochon", "Pig Nose". When used by the police, it was called "panier à salade", "salad basket". 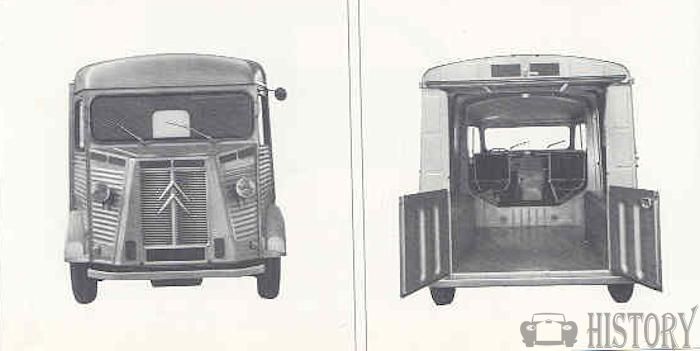 The distinctive corrugated body work used throughout the period of production was inspired by German Junkers (Aircraft) starting from the First World War until the 1930s, the three engined Junkers Ju 52 being the last to use this construction. Henry Ford also adopted this construction for the Ford Tri-Motor passenger aircraft. The ribs added strength without adding weight, and required only simple, low cost press tools. The flat body panels were braced on the inside by 'top hat' box sections, at right angles to the ribs.

Vehicles left the Citroën factory with only three body styles: the standard enclosed van, a pick-up version, and a stripped-down body which went to non-Citroën coach-builders and formed the basis for the cattle-truck and other variants. The basic version had an overall length of 4.26m, but vehicles were also available in a LWB version with an overall length of 5.24m.

In September 1963 the earlier style rear window - a narrow vertical window with curved corners - was replaced with a square window the same height but wider, 45cm on each side. The bonnet was modified to give two additional rectangular air intakes at the lower edges, one for a heater, the other a dummy for symmetry. 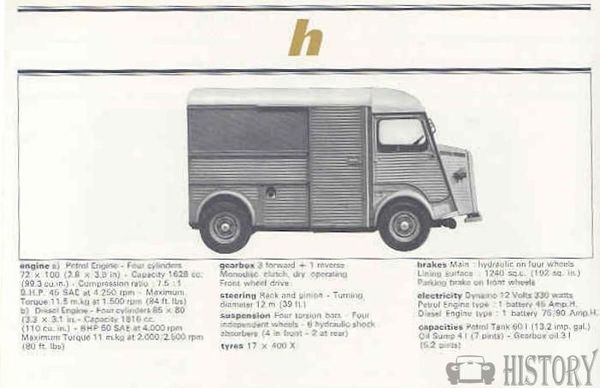 In early 1964, the split windscreen used since 1947 was replaced with a single windscreen, while in late 1964 the chevrons on the radiator grille, previously narrow aluminum strips similar to those on the Traction Avant, were replaced with the shorter, pointed style of chevrons as used on most Citroen vehicles in the last decades of the twentieth century.

In November 1969 the small parking lights were discontinued, the front indicators were recessed into the wings, and the shape of the rear wings was changed from semi-circular to rectangular.

Rear hinged 'Suicide' cab doors were used until the end of production in 1981, except on vehicles manufactured for the Dutch market where conventionally hinged doors were available from 1968 onwards. 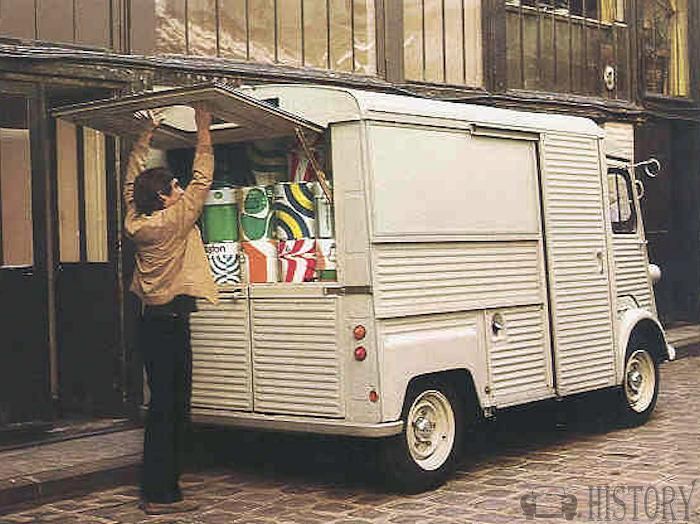