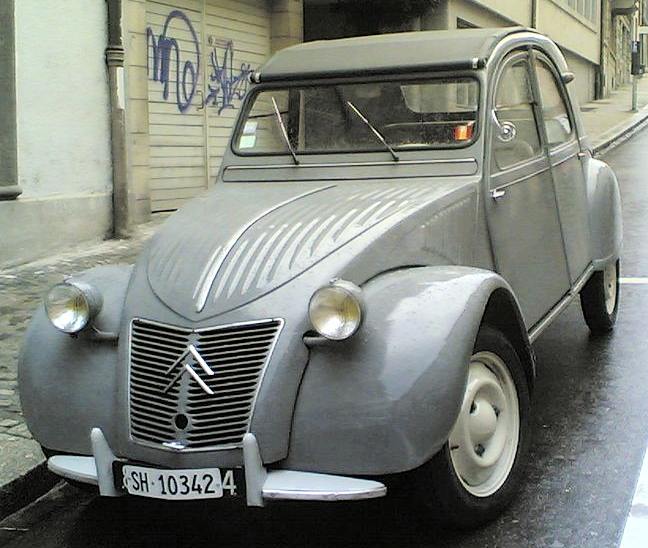 Chronology of the development of models during production

Robert Radar designed a fibreglass body on the chassis of a 2CV in 1956 and built a few prototypes in his Citroën Garage in Liège, Belgium. Citroën Belgium was enthusiastic about this model and decided to produce it as an official Citroën 2CV in its Forest (near Brussels) factory. They manufactured about 50 bodies and added the model called 2CV "Radar" on the price list. They were assembled on order, but in 1958 and 1959, only 25 were sold and production ceased. The remaining bodies were destroyed later. There are five or six of them left, one in the Netherlands and four or five in Belgium.

The small French company UMAP was established in 1956 in the northern French village of Bernon, ( Aube ) by Camille Martin, the former mayor. The acronym UMAP stands for Usine d'Modern Applications Plastique - (Factory for Modern Plastic Applications). UMAP produced the SM 425 and SM 500 from 1957, two externally identical coupés based on the Citroën 2CV. In 1958 the production was discontinued.

The Bijou was built at the Citroën factory in Slough, UK in the early 1960s. It was a two-door fibreglass-bodied version of the 2CV designed by Peter Kirwan-Taylor. The design was thought to be more acceptable in appearance to British consumers than the standard 2CV. Incorporating some components from the DS (most noticeably the single-spoke steering wheel, and windscreen for the rear window), it did not achieve market success, because it was heavier than the 2CV and still used the 425 cc engine and so was even slower, reaching 100 km/h (62 mph) only under favourable conditions. It was also more expensive than the Austin Mini, which was more practical. Only 207 were built.

One novel model was the 2CV Sahara, a four-wheel drive (4×4) car, equipped with two engines (12 hp each), each one having a separate fuel tank. One was mounted in the front driving the front wheels and one in the back driving the rear wheels. A single gearstick, clutch pedal and accelerator were connected to both engines. It was originally intended for use by the French colonies in Northern Africa. As well as a decreased chance of being stranded, it provided four-wheel-drive traction with continuous drive to some wheels while others were slipping because the engine transmissions were uncoupled. Therefore it became popular with off-road enthusiasts. Between 1958 and 1971, Citroën built 694 Saharas, but only 27 are known to exist today. The top speed was 65 km/h (40 mph) on one engine, but this increased to 105 km/h (65 mph) with both engines running.

British journalist Paul Walton flew to Israel to drive one of the 27 examples left, in the desert for the April 2000 issue of Classic Cars magazine.

The Méhari was also built as a 4×4, but with only one engine.

Various 4×4 conversions were built by independent constructors, such as Marc Voisin, near Grenoble, some from a Méhari 4×4 chassis and a 2CV body. In the UK, Louis Barber builds single-engined four-wheel-drive 2CVs. In the late 1990s, Kate Humble from BBC Top Gear tested one against a Landrover Defender off road. The 2CV won.

Although the terminology is sometimes confused, 2CV 4×4 generally refers to these models, whereas 2CV Sahara refers to the two-engined Citroën vehicle.

Another very different double front-ended, four-wheel drive (but not at the same time) 2CV, the 1952 Citroën Cogolin, was built for the French Fire Service—the Sapeur-Pompiers.