The Citroën DS is an luxury automobile which was manufactured and marketed by the French company Citroën from 1955 to 1975.

Styled by Italian sculptor and industrial designer Flaminio Bertoni and the French aeronautical engineer André Lefèbvre, the DS was known for its aerodynamic futuristic body design and innovative technology, including a hydropneumatic self-levelling suspension.The DS was primarily manufactured in Paris, with other manufacturing facilities in the United Kingdom, South Africa, the former Yugoslavia (mostly Break Ambulances), and Australia.

The DS advanced achievable standards in automobile ride quality, handling, and braking. Citroën sold nearly 1.5 million D-series during the model's 20-year production run.After 18 years of secret development as the successor to the Traction Avant, the DS 19 was introduced on 5 October 1955 at the Paris Motor Show. In the first 15 minutes of the show, 743 orders were taken, and orders for the first day totalled 12,000.

The high price tag, however, hurt general sales in a country still recovering from World War II, and a cheaper submodel, the Citroën ID, was introduced in 1957. The ID shared the DS's body but was less powerful. Although it shared the engine capacity of the DS engine (at this stage 1,911 cc), the ID provided a maximum power output of only 69 hp compared to the 75 hp claimed for the DS19. Power outputs were further differentiated in 1961 when the DS19 acquired a Weber-32 twin bodied carburetter, and the increasing availability of higher octane fuel enabled the manufacturer to increase the compression ratio from 7.5:1 to 8.5:1.A new DS19 now came with a promised 83 hp of power.The ID19 was also more traditional mechanically: it had no power steering and had conventional transmission and clutch instead of the DS's hydraulically controlled set-up. Initially the basic ID19 was sold on the French market with a price saving of more than 25% against the DS, although the differential was reduced at the end of 1961 when the manufacturer quietly withdrew the entry level ID19 "Normale" from sale. A station wagon variant, the ID Break, was introduced in 1958.

The DS was the first mass production car with front power disc brakes. It also featured hydropneumatic suspension including an automatic leveling system and variable ground clearance, power steering and a semi-automatic transmission (the transmission required no clutch pedal, but gears still had to be shifted by hand), though the shift lever controlled a powered hydraulic shift mechanism in place of a mechanical linkage, and a fibreglass roof which lowered the centre of gravity and so reduced weight transfer. Inboard front brakes (as well as independent suspension) reduced unsprung weight. Different front and rear track widths and tyre sizes reduced the unequal tyre loading, which is well known to promote understeer, typical of front-engined and front-wheel drive cars.

As with all French cars, the DS design was affected by the tax horsepower system, which effectively mandated very small engines. Unlike the Traction Avant predecessor, there was no top-of-range model with a powerful six-cylinder engine. Citroën had planned an air-cooled flat-6 engine for the car, but did not have the funds to put the prototype engine into production. Despite the rather leisurely acceleration afforded by its small four-cylinder engine, derived from the Traction Avant, the DS was successful in motorsports like rallying, where sustained speeds on poor surfaces are paramount, and won the Monte Carlo Rally in 1959 and controversially in 1966, after the disqualification of the BMC Mini-Cooper team. In the 1000 Lakes Rally, Pauli Toivonen drove a DS19 to victory in 1962.

Australia constructed their own D variant in the 1960s at Heidelberg, Victoria, identified as the ID 19 "Parisienne." Australian market cars were fitted with options as standard equipment such as the "DSpecial DeLuxe" that were not available on domestic European models.

Until 1965 cars were assembled at the manufacturer's Slough premises, to the west of London, using a combination of French made semi CKD kits and locally sourced components, some of them machined on site. A French electrical system superseded the British one on the Slough cars in 1962, giving rise to a switch to "continental style" negative earthing. After 1965 cars for the British market were imported fully assembled from the company's French plant. The British-built cars are distinguished by their leather seats, wooden dashboards, and (on pre-1962 cars) Lucas-made electrics.

The DS was sold in the United States from 1956 to 1972, over which time 38,000 units were sold. While the DS was popular in Europe, it didn't sell well in the United States. Ostensibly a luxurious car, it did not have the basic features that buyers expected to find on such a vehicle: fully automatic transmission, air conditioning, power windows, and a powerful engine. The DS's price in 1970 ranged from US$4,066 to US$4,329.

Also, American luxury-car buyers at the time were conditioned to show off their new cars, the design details of which were changed every model year as a kind of stylistic planned obsolescence, but the DS' appearance did not change substantially in the 16 years it was available in the States.

US regulations at the time banned one of the car's more advanced features, its composite headlamps with aerodynamic cover lenses. At the time, all vehicles sold in the US had to have standard-size sealed beam headlamps; composite replaceable-bulb lamps weren't permitted until late 1983. And cover lenses, even clear ones, are not legal in the US. The first year of aerodynamic glass enclosing the headlamps on the DS was also the first year that feature was outlawed in the US: 1968.

The DS was finally phased out in 1976, by which time 1,455,746 cars had been produced, including 1,330,755  built at the manufacturer's original mass-production plant in Paris at the Quai André-Citroën (previously the Quai de Javel). The decision not to continue with the model simplified the company's plans to transfer its principal production lines by 1976 to a new plant being developed further from central Paris, at Aulnay-sous-Bois. The last car came off the production line on 24 April 1975, and the DS was replaced as the large family or executive car in the model range by the smaller CX. By this time the manufacturer had taken the elementary precaution of building up approximately eight month's of inventory of the "break" (estate/station wagon) version of the DS, however, to cover the period till Autumn 1975 when the estate/station wagon version of the CX would be introduced.

The DS always maintained its size and shape, with easily removable, unstressed body panels, but certain design changes did occur.

A station wagon version was introduced in 1958. It was known by various names in different markets (Break in France, Safari and Estate in the UK, Wagon in the US, and Citroën Australia used the terms Safari and Station-Wagon). It had a steel roof to support the standard roof rack. Familiales had a rear seat mounted further back in the cabin, with three folding seats between the front and rear squabs. The standard Break had two side-facing seats in the main load area at the back. The Ambulance configuration was similar to that of the Break, but with a 60/30 split in the rear folding seat to accommodate a stretcher. A 'Commerciale' version was also available for a time.

In September 1962, the DS was restyled with a more aerodynamically efficient nose, better ventilation and other improvements. It retained the open two headlamp appearance, but was available with an optional set of driving lights mounted on the front fenders. In 1965 a luxury upgrade kit, the DS Pallas (after Greek goddess Pallas), was introduced. This included comfort features such as better noise insulation, a more luxurious (and optional leather) upholstery and external trim embellishments.

In 1967, the DS and ID was again restyled, by Robert Opron, stylist of the later SM. This version had a more streamlined headlamp design, giving the car a notably shark-like appearance. This design had four headlights under a smooth glass canopy, and the inner set swivelled with the steering wheel. This allowed the driver to see "around" turns, especially valuable on twisting roads driven at high speed at night.

The station wagon edition, the Break (called the ID Safari on the UK market) and "Familiale", was also upgraded. The hydraulic fluid changed to the technically superior LHM (Liquide Hydraulique Minéral) in all markets except the US, where the change did not take place until January 1969.

Rarest and most collectable of all DS variants, a convertible was offered from 1958 until 1973. The Cabriolet d'Usine (factory-built convertible) were built in small series by French carrossier Henri Chapron, for the Citroën dealer network. These DS convertibles used a special frame which was reinforced on the sidemembers and rear suspension swingarm bearing box, similar to, but not identical to the Break (Station Wagon) frame.In addition, Chapron also produced a few coupés, non-works convertibles and special sedans (including the "Prestige", same wheelbase but with a central divider, and the "Lorraine" notchback). 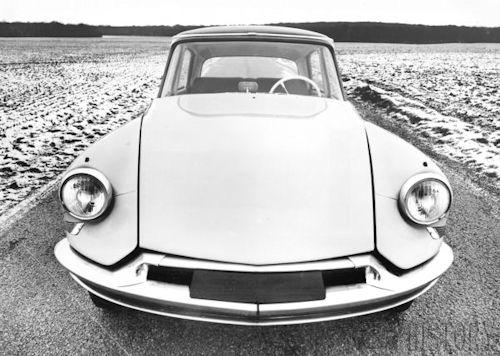 It is the first car to generalize the centralized hydraulic systems of assistance, in particular the steering, the braking and the hydropneumatics suspension which makes it possible, with the exception of the first two hundred examples produced, to vary the ground clearance thus facilitating changing wheels, the jack being replaced by an adjustable stand. The hydropneumatics suspension was mass-tested in more than 3,000 units on the rear of the Citroën Traction Avant 15 CV 6 Cylinders "H" from 15 April 1954. But above all, it provided the DS with and exceptional comfort for the time. An engineer's car, its construction required the invention of new precision machines used for the (pneumatic) measurement of parts. Despite its old Traction AV engine, improved with a side camshaft for the first models, its rearing up when accelerating and its dive on the front when braking, its sensitivity to blackcurrants and the fact that the rear passengers may be subject to “seasick “, it was the benchmark for luxury cars throughout the 1960s, giving Citroën a big head start. Since the hydropneumatics suspension system is the only alternative to spring suspension, Rolls Royce and Mercedes adopt a similar technique for their heaviest and also higher-end models. Its comfort and its handling, exceptional for the time, as well as the large space in series for the legs of the passengers in the back, immediately make it the official vehicle of General de Gaulle.

The four-cylinder in-line engine goes from 1.9 to 2.0 then 2.1 and finally 2.3 litres hence the designations of the different versions (DS 19, 20, 21, 23). This engine, designed in the 1930s for the Traction, already considered one of the weaknesses of the later Tractions and, a fortiori of the DS, because of its lack of sophistication (lateral camshaft, crankshaft with only three bearings until 1966), evolves all the same and will even still be used on the first CX.

From the 1969 show, Bosch electronic injection (Jetronic type) appeared on the DS 21. It was in that the mechanical gearboxes received a 5-speed gearbox, welcome on the highways. The following year, all the “21” were offered with a Borg-Warner 3- speed automatic gearbox.

The red liquid, LHS (synthetic hydraulic liquid) used in the hydraulic circuit, caused an epidemic of breakdowns shortly after the launch of the car due to a major oversight by Citroën chemists: this liquid, although identical to that used in aviation, becomes oxidizing above 40 °Cand eats away at all joints in the circuit causing leaks. The slight change in the formula of the LHS2 solved the problem in 1957. From October 66 (model 67) a brand-new green oil of mineral origin, the LHM ("Liquid Hydraulic Mineral"), also used in most machines’ solutions, will solve the problem of leaks and offers the advantage of superior stability with a boiling point of 265 °C. Hydraulic parts for LHS (synthetic hydraulic fluid) and LHM (mineral hydraulic fluid) will be incompatible.

Directional headlamps were introduced as an option on the DS in September 1967 (standard on the Pallas model) for the first time on a Citroën. Behind each glass cover lens, the inboard high-beam headlamp swivels by up to 80° as the driver steers, throwing the beam along the driver's intended path rather than uselessly across the curved road. The outboard low-beam headlamps are self-leveling in response to pitching caused by acceleration and braking. 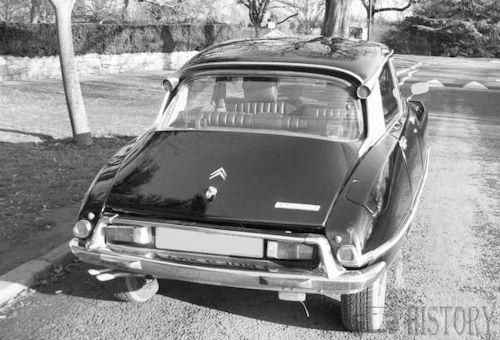 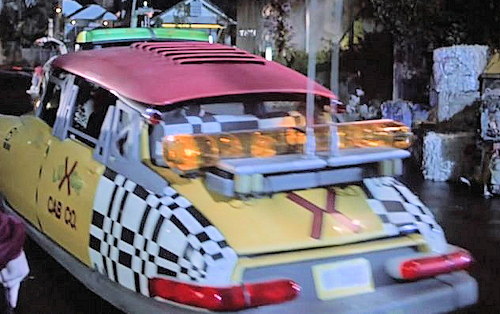