The Chrysler Crossfire is a rear-wheel drive, 2-door sports car sold by Chrysler and built by Karmann of Germany for model years 2004-2008.

Developed during the union of Daimler and Chrysler, the two-seater is based on the R170 platform and shares 80% of its components with the R170 Mercedes-Benz SLK320. The 2nd generation Mercedes-Benz SLK was built on a new R171 platform starting in the 2005 model year. The R170 platform was essentially handed down to Chrysler for use in building the Crossfire. Having initially arrived in 2001 as a concept car styled by Eric Stoddard, the Chrysler was further refined by Andrew Dyson before production began in 2003 for 2004 model year sales.

The name "Crossfire" refers to the two character lines that run from front to rear along the body sides — crossing each other midway through the door panel. Conceived during the period of Chrysler's ownership by Daimler-Benz, the name also refers to the collaboration of the two companies.

The Crossfire's fastback roof and broad rear fenders made for a rear end design that prompted automotive journalists and writers to compare the new car to American Motors' 1965–1967 Marlin. The "distinctive boat-tail rear end that reminds more than one observer of the old Rambler Marlin." For example, Rob Rothwell wrote "... when I first espied the rear lines of the Chrysler Crossfire I was instantly transported back to 1965 and my favorite car of that year, the Rambler Marlin." Motor Trend also compared the "provocative boattail theme" of the 2004 Crossfire's sheetmetal to that of the AMC Marlin. However, British motoring journalist Jeremy Clarkson had a less kind interpretation of the Crossfire's design, stating that the shape of the rear end resembles the stance a dog takes when defecating.

The standard transmission is a 6-speed manual with an optional 5-speed automatic. Base (Standard) and Limited models, originally sold beginning in the 2004 model year, are equipped with a Mercedes-Benz 3.2 L, 18-valve, SOHCV6 engine which produces 215 hp (160 kW) and 229 pound force-feet (310 N·m) of torque. SRT-6 models are equipped with a special supercharged version of the engine built by AMG. SRT-6 models came only with the 5-speed automatic transmission, consistent with AMG cars of the same era. The 6-speed transmission used by the Chrysler Crossfire is a variant of the Mercedes sourced NSG-370. The 5-speed automatic transmission in the Crossfire (known as 5G-Tronic) is also Mercedes sourced and a variant of the 722.6 family. The automatic achieves a better EPA fuel efficiency rating over the 6MT, mostly due to the difference in gear ratios.

Unlike most cars of its time, the Crossfire does not use a rack and pinion steering system; instead, it utilizes a recirculating ball system as employed on the donor R170 platform. Front suspension is unequal length (SLA) double wishbone suspension with 5 point multi link in the rear. All Crossfire models were built with 2 different wheel sizes, the front wheels are 18-in. x 7.5-in. with 225-40/18 tires and the rear wheels are 19-in. x 9-in. with 255-35/19 tires.

The first production Crossfire was driven off the assembly line on 3 February 2003, by Chrysler Group's COO Wolfgang Bernhard in Germany. 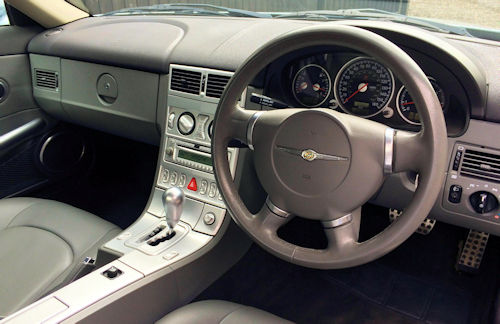 The basic equipment standard across all versions of the Chrysler Crossfire

The sales of the Crossfire were slow, with an average 230-day supply of the vehicles during November 2005. In December. Very few Crossfires were imported to the United States and Mexico for 2006 (and almost all of these were roadsters).

Chrysler discontinued the Crossfire after the 2008 model year, as part of its restructuring plans.The last Crossfire rolled off of the assembly line on December 17, 2007.

For the first model year (2004), only the coupe was offered (with no trim levels), equipped quite similarly to the next year's Limited model. In model year 2005, there were two models available; Coupe and Roadster, each with three trim levels: Base (with fewer amenities), Limited, and SRT-6 (supercharged). There was an SE Roadster model (essentially a base model) in 2006-2007 available only in Blaze Red Crystal Pearl and with black accented 15-spoke SRT-6 style wheels. Base Crossfire models, both Coupe and Roadster, have black painted windshield frames, black filler plugs (in place of fog-lights) in the front fascia, and fabric seats with separate, movable headrests. Limited and SRT-6 models, both Coupe and Roadster, all have silver painted windshield frames and are equipped with fog lights. The Limited has leather upholstery. The SRT-6 model has unique Leather/Alcantara upholstery.

The SRT-6 trim level, as both coupe and convertible, featured an AMG supercharged engine delivering 330 hp (246 kW) and 310 lb·ft (420 N·m) of torque. Other SRT-6 model specific features included suspension and brakemodifications, a front fascia air dam and a fixed vs. retractable rear spoiler. The Crossfire SRT-6 model used the same drive-train, suspension, and braking components as those used on the Mercedes-Benz SLK 32 AMG. 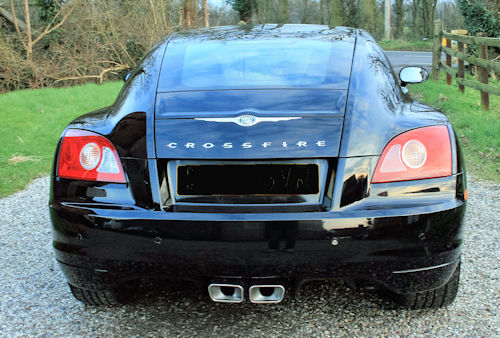