The Chevrolet Captiva is a SUV of the brand Chevrolet , which has been built since the fall of 2006. In Australia, this is aso offered as Holden Captiva 7 , in South Korea until the abandonment of the brand as Daewoo Winstorm .

At the 2004 Mondial de l'Automobile , a concept car was first introduced under the name Chevrolet S3X whose shape is similar to the Captiva.  The production vehicle was formally the first time shown at the Geneva Motor Show in 2006.The Captiva the same platform as the GM Theta  and many items with the Opel Antara , Saturn Vue and Holden Captiva. The market launch took place in October 2006 4 out of 5 Stars in the Euro NCAP - crash test (2007) for adults later models recieved 5 stars.

It was one of the first European Chevrolet models equipped with the electronic stability program ESP . In contrast to the sister model of Opel, the Chevrolet Captiva is also available with 7 instead of 5 seats.

On December 5, 2013, Chevrolet announced that it would largely withdraw from the Western European market by the end of 2015, This should strengthen the Opel brand in the continental European market.

In early 2011, the Captiva was revised. These modifications gave the model a larger brand-typical grille and new fuel-efficient engines. In this form, the vehicle was formally shown for the first time at the 2010 Mondial de l'Automobile .

In the spring of 2013 and formal debut at the Geneva Motor Show of that year There was another facelift:

At the Dubai International Motor Show 2015, another revised version of the Captiva for the 2016 model year . 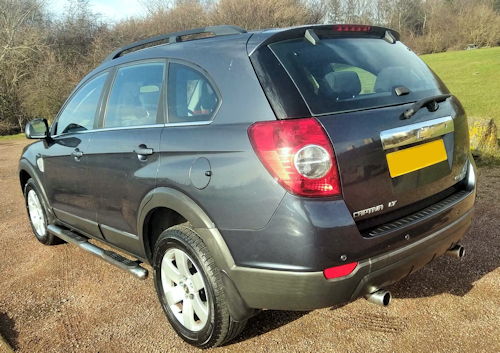