The Cadillac XLR is a roadster built by the US car manufacturer Cadillac from early 2003 to spring 2009 .

With the XLR, General Motors followed the trend of the steel folding roof convertible after the structurally similar Mercedes-Benz SL-Class (R 230) had successfully launched in the United States .The production model is based on the study Evoq of 1999.The vehicle was presented formally at the NAIAS 2002 and in spring 2003 in series production. The Y platform used is an intermediate between Corvette C5 and Corvette C6 .

The production of the XLR at the GM plant Bowling Green in the US state of Kentucky was terminated in the spring of 2009.

Equipped XLR with the North Star engine with the engine identifier LH2, one made of light metal V8 engine with 4.6 liter displacement and four overhead camshaftwith camshaft timing (VVT), until the date on which the V8 engine with the engine code LTA available as of 2018 was the highest technical development stage of all ever engineered General Motors V8 engines. At the same time, the LH2 version marked the end of production of the North Star engines, as these were discontinued because of the expensive development and production in June 2010 and since then, the simpler to manufacture Chevrolet LS OHV engines was avoided.The transaxle design has achieved a weight distribution of 50: 50 (similar to the Corvette C6 ), which should lead to a more sporty-neutral driving behavior.

A special feature is the standard Keyless-Go radio key designed by the designer Bulgari , which makes it possible to start the vehicle using the keyless system in conjunction with the start pushbutton and the dashboard with real wood applications made of eucalyptus wood ( ebony on the XLR-V). The XLR also features a head-up display that displays speed, distance and navigation information on the windshield. To the other standard equipment belonged u. a. DVD navigation and entertainment system with touch screen display, Bose sound system with 9 speakers ,Distance radar , refrigerated cup holders, PDC (parking assistance) and air-conditioned / ventilated seats. The air conditioner air-conditioned by a fan blows the air over a thermoelectric ceramic disk to reduce or increase the air temperature in the vehicle by 15 degrees within one minute, which was considered to be particularly effective. 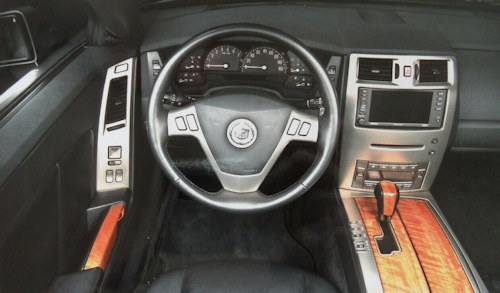 The XLR also comes standard with the adaptive damping system Magnetic-Selective-Ride-Control . The doors are also unconventional without door handles - they can be electronically opened by a pressure sensor. Through the use of various lightweight materials - including the electro-hydraulic folding roof construction made of a magnesium alloy - the weight amounts to about 1.6 tons. The passenger compartment was built as a sandwich, among other things with specially prepared balsa wood - based on the technology used by NASA to absorb the impact energy of space probes. The luggage compartment volume is 125 liters with open and 329 liters with closed roof.

In the fall of 2008, the XLR was primarily visually revised. On the exterior, the new front and rear bumper, the modified radiator grille and the air intakes in the wings and the more contoured bonnet fall on. The redesigned 18-inch alloy wheels are optionally chrome-plated and an adaptive cornering light is intended to provide greater safety. Inside, more leather, Alcantara on the headliner and a cruise control is used.

The standard OnStar -8.0 system has a Bluetooth interface as well as voice recognition and allows the driver to find out about the traffic situation via GPS tracking at a service center.