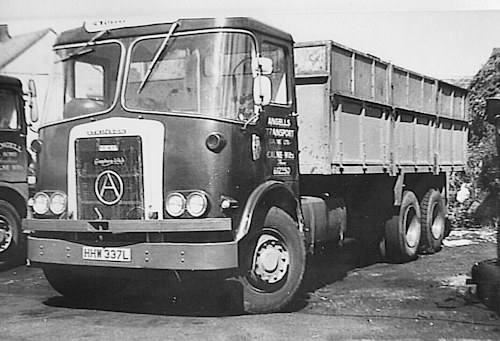 Atkinson Vehicles Limited was formed in 1907 in England with Commercial vehicles built over many years.

Atkinson Vehicles Limited, founded in 1907, specialised in vehicle repair, as well as the manufacture of gasoline-powered carts and other miscellaneous things. With the advancement of road transportation, the Company began to produce steam vehicles of its own design, the majority of which were manufactured between 1914 and the late 1920s.

Edward Atkinson, the company's founder, was born in 1875. The prototype of the 'Pullcar,' which Atkinson assisted in the creation of in 1921, ran until 1934. During the First World War, Atkinson was given the chance he had been yearning for. The larger manufacturers had shifted their focus to munitions production, and the urgent necessity for internal road transport, as well as the railways' inability to provide a complete transportation network, allowed Atkinson to step in and fill the void.

Chassis building lessened as the demand for steam-powered vehicles declined and the Company turned to the conversion of vehicles from solid to pneumatic tyresand chassis were also converted from two-axle to a patented three-axle design.The popularity of this waggon spread rapidly amongst local hauliers, during 1916 and 1917 quite a number were made. After the war the short boom period made Atkinson realise the potential, and he purchased a five acre site in Fenchwood for the erection of a new factory.In 1918 the new factory at Frenchwood was completed and production recommenced, 125 chassis had been built at the old factory of Kendal Street.

In 1919 a further 100 chassis were completed in the new factory. By 1921 a new waggon design was completed a 2 1/2ton, low chassis height made for easy manhandling of goods on local delivery work for which the design was suited. Of extremely short wheelbase the vehicle could turn in a 20ft roadway without reversing. 1923 saw the introduction of a 4 wheeled steam tractor which with tractor and trailer was designed to carry 12 tons.

The established firm of Walker Brothers (Wigan) Limited, and a new company was formed — Atkinson Walker Waggons Limited.Walker Brothers who had started business in 1866, were well respected thrdughout the world as makers of mining machinery, air compressors and ventilation equipment. With the merger withAtkinson the work was split up, with Atkinson carrying on to produce his steam waggons whilst Walker Bros., produced light steam rail locomotives.Eventually in June 1933 a new company was formed Atkinson Lorries (1933) Limited,with diesel engine and six wheeler conversions.

In 1931 two designs of oil engined chassis were announced, 6ton 4 wheeler, and the other a 12ton 6 wheeler rigid.The 12 ton named the 'Al' lorry was the first to appear, made up of various vehicle parts left over from conversions work, fitted with a six cylinder Blackstone BMV6 producing 55 b.h.p. at 1000 rpm; four speed gearbox via a multi-plate clutch to a double reduction rear axle. Starting was by an auxiliary petrol engine. The third axle was the trailing or dead axle type, and the bogie incorporated Atkinson's patent compensating gear.The diesel engine was bv this time coming into use in commercial vehicles and in the early thirties Atkinson's converted many petrol- engined vehicles to diesel power. By 1933 the first Atkinson diesel-powered vehicle appeared; the early models used Blackstone or Dorman engines but soon the Gardner diesel engine was standardized.The first, all Atkinson diesel was made in 1932, a bonnetted 4 wheeler with a Dorman ERBL diesel engine. The drive was transmitted through a Meadows four speed gearbox to a Moss worm driven rear axle. Once in service, the 4 wheel mechanical brakes were modified to Westinghouse vacuum servo operation by the Nightingale Garage.The next and final chassis to appear prior to 1933 was a rigid 4 wheeler fitted with a forward control cab to conserve loading space.However, by 1934 the new company Atkinson Lorries (1933) Limited had produced a number of chassis designs for consideration for production.

vehicle production and so a move was made to Marsh Lane, Preston which remained the home of the Atkinson company until after the second world war. The policy was to manufacture quality heavy commercial vehicles chassis using bought out components. The proposed vehicles were namely 4 and 6 wheel forward control chassis with Gardner 4, 5 or 6LW diesel engines, a 20 seater bus with normal control, and a Meadows 4 cylinder diesel engine and a 4 wheel tractor chassis. Only the forward control chassis were produced, 4 and 6 wheeler versions followed in 1937 by an eight wheeler version. Various diesel engines were tried, such as Dorman, Blackstone, Tangye, Lister, Paxman, Ruston, Thornycroft, and Crossley automotive engines and eventually Gardners diesel engine was chosen on starting ability. Up to the outbreak of world war two fifty chassis were built in Marsh Lane.

On Government direction a 6 wheel rigid vehicle design was produced for the Ministry of Supply until 1942 when the order was changed to a 8 wheelers. During the war a contract was signed with the Ministry of 6 wheeler rigids and powered by Supply to produce 60 vehicles Gardner 6LW diesel engines, intended for civilian use. Atkinson and E.R.F. were the only two companies permitted to sell to the civilianmarket. The following year another contract was received from the 6 wheelers but to be Ministry of Supply, this one for 100 chassispowered by AEC 7.7 litre diesel engines. A third and final order was 8 wheelers again with AEC diesel engines. Atkinson's reputation was enhanced after the appearance of the 260 chassis built to Government contracts.

By 1945 the position had altered once again and it was obvious that there would be a considerable post-war demand for vehicles. Marsh Lane factory, like Kendal Street before it, was now becoming too small for the rapid expansion.Production was transferred to the new factory at Winery Lane, Marsh After World War two, the Company made a strong bid for overseas markets and in 1954 both single and double-deck bus chassis were introduced. Many varied types of vehicles are now produced, powered by Rolls Royce and Cummins diesel engines in addition to the Gardner diesel, and these are in use all over the world.Atkinson Lorries designing and their own five speed gearbox in 1946. The new factory continued to expand, with Overseas markets were explored on a scale as never before, and a comprehensive dealer network was established covering the whole To facilitate the exports, agents were appointed in major of the British Isles.overseas countries and later subsidiary companies established in Australia, New Zealand, and South Africa.

A merger was accepted and completed with Seddon Motors Limited in January 1974, to form the company of Seddon Atkinson Limited. Again there was another take-over bid, this time from the American International Harvester Corporation, and this was completed in June 1974, and now the company of Seddon Atkinson Limited remains a subsidiary of the
great International Harvester Corporation.