Midas Cars Ltd. is a British automobile manufacturer that has been producing kit cars since 1978

Preivosly founded. In 1975, Harold Dermott and his business D&H Fiberglass Techniques of Greenfield near Oldham, afterwards in Corby (Northamptonshire), agreed to take over the production of the Mini Marcos from Marcos. Demott commissioned designer Richard Oakes to produce a new model because the car's appearance was a little outmoded. Midas was the name given to the new car, which was unveiled at the London Performance Car Show in 1978. The automobile had a self-supporting body made of mixed materials (GRP and steel), as well as the Mini's front subframe and engine. The Mini's rear subframe was replaced with a cross member that carried the rear wheels' two trailing arms.

A facelifted model was introduced in 1981, featuring a number of improvements over its predecessor that had been suggested by McLaren Racing 's Gordon Murray . The car was available in three trims, gold, silver and bronze , depending on trim levels. The small workshop in Oldham could no longer meet the increased demand. So the company relocated to Corby and changed its name to Midas Cars Ltd.

In 1985 further improvements were realized; the Midas Gold was adapted to the Austin and MG Metro parts that are now available. In addition, the exterior was revised - again by Richard Oakes - who provided the design with wider fenders, a "frog eye" front and larger windows. Gordon Murray improved the aerodynamics. The Midas successfully passed an ECE12 crash test, allowing it to be offered both as a kit and as a complete car. A convertible version appeared in 1989, but production had to be stopped in the same year because the factory buildings had burned down.

the Midas Gold provides a viable alternative for those who desire something detached from the mainstream sportscar offerings. Midas have done much over the years to shake off the kit car image and although the car does require a small amount of work by the owner to complete, it can basically be considered as a production car. With its origins in the Mini Marcos of the sixties, the current Midas has been extensively developed, having a GRP monocoque using Mini/Metro subframes and A series power units in various states of tune. Engines range from standard 1275cc units to an Avonbar tuned 1.4 litre unit, all of which drive 4-speed, in sump, transmissions. The 2+2 accomodation is a blend of Austin Rover controls and instruments, together with Midas' own trim and upholstery, the driver's seat being specially tailored to the purchaser's dimensions

The rights to manufacture the car were bought in 1990 by Patiche Cars of Rotherham (Yorkshire) who relaunched the entire range and made a few convertibles before reselling the rights to the Gold Cabriolet to GTM of Sutton Bonnington (Leicestershire) . GTM made some changes to the design, e.g. B. a hydropneumatic wheel suspension and a hard top. The model range was expanded in 1995 with a 2+2 coupé based on the Mini Metro and Rover 100 models with K-series engines.

The Midas Coupe is the fourth generation Midas and like it's predecessors has been styled by Richard Oakes. The newMidas is a modern economical four seater Coupe, designed to give the quality feel of a small BMW. The Rover Metrocomponents provide the ideal mechanical base, and the 'K' series engine is the most up to date, sought after power unit available. The overall package of pre-coloured full composite non corrosive body shell, two plus two seating, full size lockable boot, modern mechanical components with all the associated extra's, electric windows, central locking etc.,makes the Midas Coupe one of the most advanced cars available today, and with the lifetime guarantee against corrosion, it will still be around well into the next century,The heart of the Midas Coupe is the full composite, one piece monocoque. NO Other materials apart from GRP composites are used in the manufacture of the body shell and ancillary panels, ensuring a true corrosion free car for life.
The Midas Coupe is the fourth generation Midas and therefore benefits from the eighteen years experience gained in producing monocoque's. Midas have developed and evolved a method of manufacture to produce an all composite car second to none, no other car has been developed as
thoroughly and with as much experience as the new Midas coupe and to this day, the Midas monocoque is the only composite car to have passed the ECE 12 crash barrier test.The new Midas Coupe utilises the same technology as it's predecessors, but benefits from the advances made in
composite materials since the early monocoque design. The over all outcome being an incredibly strong and rigidstructure, relatively light weight compared to steel bodied cars, but with a lifetime guarantee against corrosion.
The new Coupe has been designed completely around the components from a Rover Metro. Everything possible from the original Rover Metro has been used in the same position making the build a simple transfer of components from one body shell to the other. By providing everything in the kit, it eliminates the need for scrap yard hunting, time wasting trips to motor factors and most importantly, there are absolutely no hidden costs. The cost of the kit plus the purchase price of the donor car is the final 'on road' cost. The Rover 'K' series Metro is the most modern, up to date, donor available, the 'K' series engine being the most advanced unit of it's type. First manufactured in 1990 and still in full production today with the latest Rover 100. The stripping and re-assembly of the nearly new components is much easier than using components from a 20 year old donor. When complete, spares are supplied by any Rover dealerand servicing can be carried out by any main agent or local garage.
The Midas Coupe is built from a single donor, the Rover Metro or lately the Rover 100. All models can be used from the standard low insurance 1100cc to the high performance 1400cc GTI multi-point  fuel injection.
DIMENSIONS
Length 3.4m -Width 1.54m -Height 1.24m -Wheel Base 2.27m

In 1990, the molds for the GTM Gold Coupé were sold to Berlin , where they were used in a job creation project . Meanwhile, the old Mini-based Midas had reappeared in the UK, where they were briefly built by Midtech Cars .

In 2001 GTM sold the rights to the design to a new Midas Cars Ltd. In Redditch (Worcestershire) . The model range now consisted of the coupe, called the Cortez , and a convertible with a K-series engine, called the Excelsior . Although the cars were well received by the market, the company had to be liquidated in 2003.

A new company, Alternative Cars Ltd. was founded in 2003 and began manufacturing Gold Convertible, Cortez and Excelsior kits in 2004 from a small workshop in Clanfield, Oxfordshire . 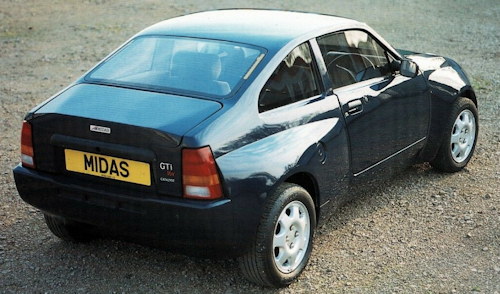