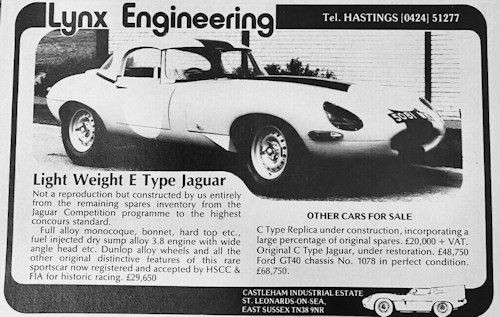 Lynx is a British car brand often closely related to Jaguar Since it was founded in 1968.

The company was founded in 1968 by Guy Black and Roger Ludgate. In the early years, Lynx specialized in the repair, maintenance and tuning of sports and racing cars, Jaguar C-Type and D-Type models. In 1972 the company began to completely rebuild a first DType using frame and chassis components from the E-Type ; the vehicle, completed around 1974, made its debut at an English trade fair in 1975 as the Lynx D-Type . In parallel, Lynx was commissioned byJaguar involved in the further development of the E-Type , both with engineering services,  and the construction of pre-production vehicles. In addition, there were conversions of Jaguar series vehicles on behalf of private customers. From 1980, conversions based on the Jaguar XJ-S formed the company's mainstay, initially as the full convertible called Spyder , and from 1983 as the Shooting Break called Eventer . From 1982 there was more optical tuning, from 1986 convertible conversions, including models from other manufacturers. Beginning in 1990, the company offered the Lynx XKSSas a high quality replica of the street sports car Jaguar XK-SS .

In the early 1980s, the company went through some structural changes. In 1980 it was still known as Lynx Motor Co. based in Northiam near Rye in East Sussex . In the following year, the legally independent Lynx Replica Sales Ltd. based in the posh London district of Kensington . For 1982, Lynx Sales Ltd. with new office and exhibition space - again in Kensington - organization and sales, while Lynx Engineering Ltd. took care of the production. For 1983 both companies were based at St Leonards-on-Sea near Hastings in East Sussex as Lynx Motor Co. Ltd. merged;  the company was to remain based there for the next 27 years. From 1988 the company finally traded as Lynx Cars Limited and moved into new premises on the same street.

In March 1992 the company was taken over by John Mayston-Taylor. The car enthusiast who himself collects and restores high quality classic automobiles, Lynx Cars Limited initially continued as part of another company, the successful family owned timber trading company CHDavis & Co. Limited , which had existed since 1949 . From 1995 he used the company name Lynx Motors International Limited for the automotive division . However, full legal autonomy under this name did not take place until the end of March 2000, when the division was spun off from the long-established trading company.

Under Mayston-Taylor's leadership, the company refocused on its earlier Jaguar -related pillars. Lynx created further new cars to order as individual pieces in the classic style; In addition to the Lynx D-Type and the XKSS , high-quality reproductions of the E-Type Lightweight were added to the delivery program from 1994, .As of April 2009, Lynx Motors International Limited existed under the significant leadership of Nigel John Forsyth; he had taken over the trademark and naming rights to Lynx Motors as well as the manufacturing equipment and materials. The detailed replicas of the older Jaguar models were again available as new cars and the restoration of original vehicles and the reproduction of spare parts were initially continued. At the same time, Forsyth headed the company Proteus Sports & Racing Cars Limited,  which to this day offers replicas of other racing and sports cars. As the demand for the Lynx-Replicas declined again in the early 2010s, Lynx once again halted new car manufacturing and around 2013 sold parts of the inventory, partly to Jaguar and partly to collectors and car enthusiasts.

Lynx Motors (International) Limited has existed since October 2014 . Forsyth brought the trademark and naming rights to the new company, which continued production of the earlier models. The other directors are the Czech entrepreneur Josef Lopata and the German engineer Johannes Schilcher. Since 2014, Lynx Motors has been offering faithful replicas of the Jaguar C-Type , D-Type , XKSS and E-Type Lightweight as new cars. There are also vehicle restorations, especially for original Jaguars , older Lynxes , but also Porsches and Maseratis .

The bodies of the new car models are still formed in England in a complex manual process from light metal sheets and riveted in the same way as the originals.  For the British market, distribution runs exclusively through the trading company Hofmann's of Henley , otherwise directly through the manufacturer.

Lynx Motors Engineering Limited has existed since November 2019. Schilcher and Berger brought the trademark and naming rights to the new company, which will continue production of the earlier models and launch a new model, a Porsche based on the 964 with an aluminum body. Roger Ludgate, who founded the company in 1968, is again a shareholder in the company and, among other things, a great Porsche enthusiast, is delighted to be involved in the new project. The bodies of all Lynx models are perfectly handcrafted in Coventry/England from aluminum sheets. The company's head office is in Henley-on-Thames. The company's director is UK resident Frank Berger,

recreations of various Jaguar racing and sports cars. Externally, the Lynx vehicles correspond to the originals down to the last detail. The smallest rivet sits in exactly the same place as the original. Because of their authenticity, the Lynx models were and are very popular among Jaguar enthusiasts. A real Lynx costs around $400,000 to $680,000.

All models have Jaguar 's traditional in-line six - cylinder engines in common, which are modified by Lynx depending on the application. There is a choice of versions with 3.4, 3.8 and 4.2 liters displacement and three Weber carburettors each . The engines of the C-Type are given special cylinder heads and exhaust manifolds based on the historical original. For the other models, there is a choice between conventional pressure circulation and dry sump lubrication , which is particularly suitable for motorsport. When it comes to power transmission, there is a choice between a traditional 4-speed and a modern 5-speed manual transmission , as well as three final gear ratios of different lengths .

The bodies of all models are made of hand-machined aluminum light metal sheet. In the C-Type , it rests on a tubular space frame which, like the wheel suspension , is reproduced in accordance with the historical original. The remaining models have a central, self-supporting structure made of light alloy panels, which are fitted with the side members and the front and rear subframes of a Jaguar E-Type . The wheelbase of the Lynx-D-Type and XKSS models has been increased by 20 millimeters to 2440 millimeters compared to the historical models. The front and rear wheel suspensions also come from the E-Type for these two models; These Lynx replicas therefore have a rear independent wheel suspension with better handling and greater comfort , deviating from the historical model with a rear rigid axle .

There are various options for the body of the D-Type . Like the originals, it is available as a short-nose and long-nose version with a front end of different lengths, with or without the distinctive rear fin behind the driver's seat and with a full-length windscreen or a small racing screen just for the driver.

From the mid-1970s, Lynx also dealt with the production of special bodies for contemporary Jaguar models.In 1977, Lynx converted a Jaguar XJ-C coupe into a four-seater convertible at the customer's request. The vehicle was originally intended to remain a one-off; In view of customer reactions, however, Lynx was able to produce a small series. Later the company focused on the Jaguar XJS. Convertible conversions of the XJ-C were then carried out by competitor Ladbroke Avon into the 1980s .

Shortly after the market launch of the Jaguar XJS , Lynx developed a fully convertible version of this model, which was realized in larger numbers under the name Lynx XJS Spyder. The introduction of the safety convertible Jaguar XJ-SC, which had a fixed roll bar and a fixed roof section over the front seats, did not affect Lynx Spyder production. Only when Jaguar brought a factory version of the XJS as a full convertible onto the market in 1988 did Lynx reduce production of its own model. In the years that followed, only a few older coupés were subsequently converted into cabriolets at the customer's request.

The Lynx Eventer was Lynx Motors' most successful standalone model. It was the conversion of the Jaguar XJS into a station wagon coupe with a long load compartment and a large tailgate; the model was in the tradition of the Shooting Brakes on the British market . The car was the same as the standard XJS coupe up to the B-pillar. Behind it, Lynx added an independent, high-hanging roof construction. The long side windows between the B and C pillars were specially made for Lynx. The rear window, on the other hand, came from the Citroën Ami 8 . Lynx also changed the position and shape of the tank and installed two individual seats in the rear, the backrests of which can be folded down. The rear seats have been moved back by 10 centimeters compared to the base vehicle, resulting in more rear legroom.  Trunk length is 1188 mm with the rear seats up and 1880 mm with the rear seats down. The loading volume is 681 liters or 1103 liters.  The conversion costs amounted to £19,500 in 1994, three years later £29,500 had already been calculated.

By the time the XJS was discontinued, Lynx produced a total of 67 eventers. In doing so, the company primarily relied on brand-new starting vehicles; in addition, however, older used vehicles were subsequently converted at the customer's request. In individual cases, coupés that were manufactured in the 1980s received a so-called upgrade at the same time as the conversion, i. That is, the bumpers and wide darkened taillights of the last XJS series were subsequently adapted to them. Even after 1997, individual XJS coupés were still converted into Eventer models. The last conversion took place in 2002. 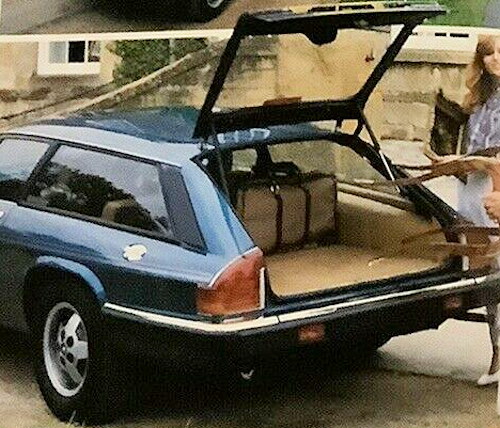