Commercial vehicle manufacturer of Birmingham;United Kingdom From 1908 to 1968 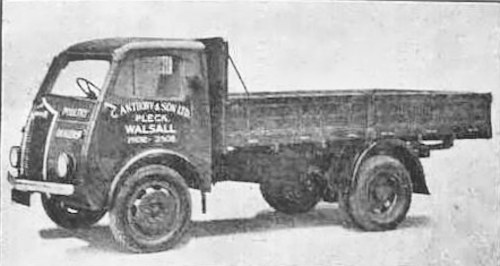 Garner Motors Limited a early commercial vehicle industry for 60 years from 1908 to 1968 Henry Garner, was the founder.

In 1907, Henry was an automobile salesperson who specialised in Argylls and Humbers. Herbert Berger Graham founded the Moseley Motor Company Works Limited in the same year. In 1908, Henry made an offer to Graham to buy the Moseley Motor Works. Garner began his automotive career by securing a highly successful deal with the Austin Motor Company to handle its Midlands sales.

The name of the company was changed to Henry Garner Limited from Moseley Motor Company Works Limited. Garner realised there were enormous potential ahead in the commercial vehicle business at the start of WWI, and in order to sell as many trucks as possible, he received an order for 200 Vulcans from an outside country. Unfortunately, no British vehicles are available to fulfil that order, so Henry Garner travelled to America in the hopes of finding another vehicle to purchase as a substitute.He found a source, but would never reveal the name of the American manufacturer. Henry Garner would obtain orders for trucks and import them from the USA selling them with the 'Garner'badge on the front of the radiator as Garner commercial vehicles. The range was; two, three, four and six tonners all powered by a well known Continental petrol engine.

At the end of the war Henry Garner continued to import his trucks and was doing well.in 1924 a re-designed 2 tonner appeared, of light construction, with forward control.Then came the Garner built in England in 1925, although it was to use well known components such as Kirkstall axles and David Brown gearboxes, Thompson made the frames, all assembled with the Dorman 2Shp, petrol engine. Garner had now moved to a new factory at Kings Road, in Birmingham.

In early 1927 the business was transferred from Henry Garner Limited to a new company of Garner Motors Limited. This left the old company to concentrate on selling cars of various makes.2 and 3 ton capacity payloads trucks were the main production, including municipal vehicles operating on small wheels with solid tyres. The operator had now the choice of a normal control or a forward control chassis with both four or six cylinder petrol engines.
In 1929 Garner built a six wheeler to War Office specifications with a payload of tons, Whilst most of their chassis were produced with Dorman petrolengines, there was an increasing number being powered by the Meadows 4EL petrol engine.
1931 introduced a six cylinder petrol engined 2 tonner, a 3 ton six wheeler with a single drive rear axle and the rearmost axle trailing, and a low loader 3 tonner for municipal operation.
1934 came and the interest shown in Garner Motors Limited by Sentinel Wagon Works Limited came to fruition and it was then that Sentinel announced that the production of Garner commercial
vehicles would be built at Sentinel works in Shrewsbury in the future. The result of this so called merger was a new range of vehicles, the 'Sentinel-Garner'.New sources of supply of engines appeared, that of the Austin and the Perkins Leopard diesel. The range advanced to three, four ton four wheeled vehicles and5 ton six wheelers. Whilst Sentinels were in difficulties and were trying to find a solution, Garner was to continue under its own name and companymanufacturing within the Sentinel works on a rental basis. 1935 found Garner Motors Limited also in financial troubles, and the receiver was called in.

Several businesspeople and Chrysler employees saved Garner, raised funds, and purchased a new factory in Acton, London. Thompson frames, Kirkstall axles, Woodhead springs, Meadows petrol engines and gearboxes were all being constructed once more. Several unusual four-wheel-drive military vehicles were created, each powered by two Ford V8 petrol engines mounted side by side and driving the front and rear axles through a transfer box and gearbox. The second world war broke out, and while the Ministry of Supply placed multiple orders for the Garner G3, construction of the four-wheel-drive military truck chassis was slow. As a result, Garners was redirected to the production of trailers, torpedo compressors, generator sets, and other items. Garner has manufactured and delivered over 10,000 truck bodywork for a variety of applications.

It was after the war when undecided which way to re-start civilian operations Garner eventually turned to the manufacture of truck bodies, although they did develop and build agriculturaltractors and towing tractors. Eventually the body side was acquired by Hawes & Company the body builders, forming the Hawson Garner.
1968 found the company in a position where it could no longer trade and it went out of business. It has been thought in the past that if Sentinel had shown moreinterest in the Garner concern they might have survived, one can never know.