Automotive manufacturer of Trobridge Devon;United Kingdom From 1979 on. 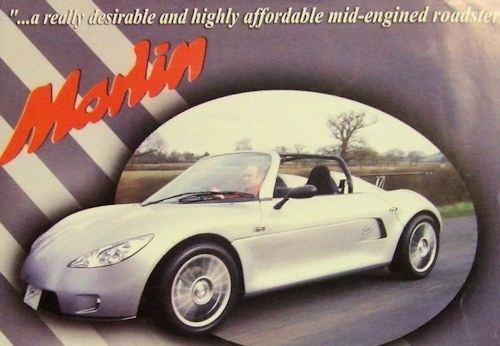 Marlin have been successfully producing hand crafted spec list their west country workshops for a quarter of a century The first rolled out to high acclaim in 1979.That car featured many innovations and since then Marlin have always been at the leading edge of new concepts. later cars such as the Marlin Berlinetta and now with modern, lightweight, road cars or race and trackday versions.

The Marlin is vaguely reminiscent of the early Zagato Alfa Romeos but is an original design made from glassfibre over a steel chassis. A range of engines, including Triumph Spitfire/Vitesse, Triumph Herald,Morris Marina and Alfa Romeo can be fitted happily into the engine bay by the buyer who has to build the car himself from a kit. As of 1984, Marlin have offered a much larger 2 + 2 Berlinetta with similar lines and a removable hard top and designed specifically for Ford Cortina mechanicals, with V6 engine options. Around 150 cars per year emerge from the works, making Marlin one of Britain's major specialist companies.

The 5EXi was developed in response to the need for an ultra-competitive mid-engine 'Elise' beater This dynamic two-seater sportscar uses Marlin's radicalnew lightweight spaceframe chassis. Matched to the superb Rover K & T series engines, the performance of this car is simply breath-taking.Marlin's design team have produced a package that will deliver better performance and handling than other well-known sportscars of this type and at a lower cost!

The Sportster - available in Track or Road trim. A race bred, road mannered, 30's styled - full on barnstormer! This car was developed as a competitive, yet spacious luxury alternative to '7' inspired sportscars.The long thrusting bonnet makes you feel like you’re piloting a pre-war GP car. But two up, this car still packs enough storage space to be a real practical winner.nHandling is legendary, due to the unique ground hugging semi-monocoque peripheral frame, which has been highly acclaimed for many years as 'the best chassis in the business' Blisteringly fast & sure footed, - with BMW reliability!