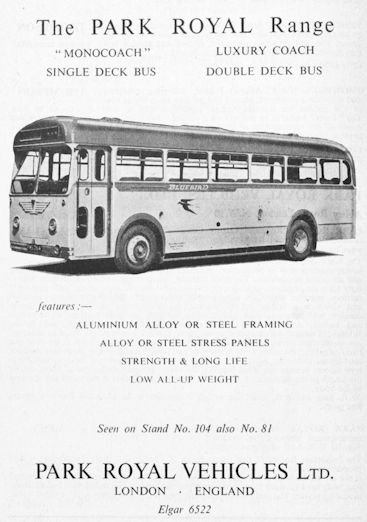 The Park Royal Vehicles , also as PRV was a manufacturer of bodies for buses and rail vehicles from Park Royal , England. The company existed from 1930 to 1980, but its roots can be traced back to 1889.

Together with Charles H. Roe , Park Royal Vehicles was one of the oldest and most important coachbuilders in the United Kingdom . The company was founded as the Hall Lewis Company in 1889 and engaged in the manufacture of bodies for carriages , road vehicles and rail vehicles. Park Royal Coachworks emerged from the company's bankruptcy estate in 1930 . The company was owned by Harry Yager, a major creditor of the Hall Lewis Company , until 1946 .

During the Second World War , PRV produced the engine fairings and outer wings of the Handley Page Halifax bomber . In addition, they were busy with the production of bodies for various military vehicles.

In 1946 the name was changed to Park Royal Vehicles.

They then in the 1950s entered the integral-construction field with the single-deck 'Monocoach', using engine and 'Reliance' passenger model. A year later the second prototype for London Transport's famous 'Routemaster' chassisless double-decker was also built, and in 1959 full-scale 'Routemaster' production got underway. This was a half-cab rear-entrance model using AEC mechanical units, coil spring suspension with air suspension at the rear on some later models, and an AEC or Leyland diesel engine.

When production came to an end in 1967 both 8.38 m and 9.14m versions had been built, some with front entrances. A prototype front-entrance rear-engined model, again using an AEC engine and running gear, was built in 1966 and became the model for a new London bus of the 1980s the XRM. Development of this was later shelved. Other double-deckers from the Park Royal stable have included the 'Renown' and its successor the
'Bridgemaster', both traditional half-cab models combining chassisless construction and low height bodywork.

In 1962 ACV merged with its subsidiaries and Leyland, six years later Leyland Motors was renamed Leyland Motor Corporation and now comprised most of the British automotive industry and a considerable part of the supplier companies. Leyland was nationalized by the Labor government in 1975. As a result of the British automotive crisis, Leyland was forced to close down subsidiaries from the end of the 1970s. AEC was closed in 1979, PRV in July of the following year.

The amalgamation of coachbuilders and chassis manufacturers under the umbrella of the ACV proved to be advantageous, as the requirements of large bus transport companies such as London Transport could be met more easily through coordinated designs.

The AEC Routemaster produced by AEC and PRV was a step towards the self-supporting bus. Up until the 1980s it was also common for chassis and superstructures for buses to be manufactured by different manufacturers. Since the chassis (front and rear subframes) of the Routemaster manufactured by AEC were provided exclusively with bodies from PRV, the structures of the frame and body could be optimized, which in addition to the use of Aluminum led to a lighter vehicle.

A total of 2873 Routemasters were produced from 1954 to 1968 in various versions, the vast majority for London.

In addition to bodies for buses, Park Royal Vehicles also manufactured bodies for other vehicles. For example, the first London taxi with a diesel engine was bodied by PRV. PRV was also involved in the production of the Bristol models 407 to 411 ; the company supplied the body shells for the luxury class vehicles from Filton until 1976.