Automotive manufacturer of United Kingdom From 2006 to 2021. 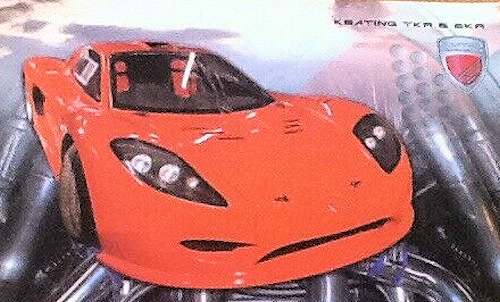 Keating Supercars was a car manufacturer based in Bolton,lancashire , England. From 2006 until 2021

Keating Supercars built the SKR, TKR, ZKR the Bolt and Berus models .The cars, which are hand built at there workshop.The Keating SKR first appeared at the British Motor Show in 2006 and was a high performance prototype car.

This was followed by in 2008 with the Keating TKR a supercar built manily for track use . With a top speed of  260 mph (418.34 km h)  was unofficially the fastest, a short time. The body is made of carbon fiber reinforced plastic . The engine is a mid-engine V8 with twin turbo and produced with a capacity of 7000 cc, a power of 1825 hp (maximum power 2000 hp). The power of the mid-engine is passed through a 5-speed gearbox to the rear wheels. The weight of the TKR is 995 kg.

The Bolt built in 2013, built using high-tech lightweight carbon fiber materials and high performance Chevrolet V8 engine that  produces around 640bhp with a top speed of 340 mph 0-60mph in 2.0sec. they were produced in England and claimed at the time the TKR and Bolt the most powerfull mass-produced supercars. The Keating TKR was also the second fastest supercar in the world.

The Berus was built in 2017. With two versions a V8 engine model also an Electric hybrid. With top speeds of over 230 mph.