Car manufacturer of Preston, Lancashire.Great Britain from 1990 to 2001. 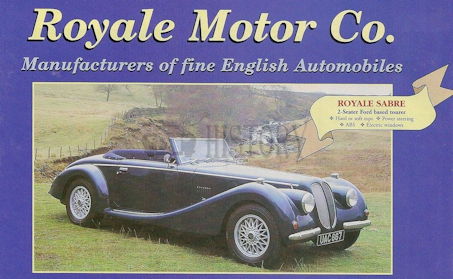 The Royale Motor Company was a British manufacturer of luxury automobiles . The brand name was Royale .

John Barlow  founded in 1990  the company in Preston . He's on the basis of large-scale technology three models in the style of the 1930s developed years and these assembled as well as in kit form.2001 the company was dissolved.

The Empire Motor Company from the Netherlands took over the 2001 model Saber , gave it in 2002 to the Vintage Motor Company from Pontefract , led by Alan Beillby, which ceased in 2006 and 2009 on Saber Sports Cars from Wandsworth gave led by Simon Rhodes.

There is no connection to the car brand Royale , under which various manufacturers offered a Morgan -like model called Royale between 1981 and 1990 .

The first model was the Drophead , a five-seater  Cabriolet with the chassis and drive technology of the Jaguar XJ 6 . The model was introduced in 1990 and produced from June 1991.  The body consisted of GRP . By 1998, emerged about 50 .

The second model Saber appeared in 1994. This was a sporty two-seater convertible with the chassis and drive technology of the Ford Scorpio and Sierra . For the drive ensured four-cylinder engines and six-cylinder engines to 2900 cc displacement .  The Saber was in Germany by an importer from Kassel for 80,000 DM offered. From this model, which will be sold under other manufacturers today, emerged about 260 copies so far.

In 1998 appeared as the third and last model of the Windsor , which was available as a four-door sedan and a Landaulet . This was based on the Ford Scorpio. By 2001, emerged about 75 copies made. 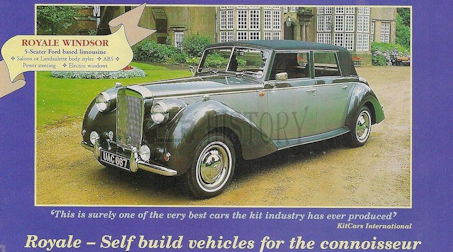