Automotive manufacturer of Yorkshire.Great Britain from 1978 to 1990. 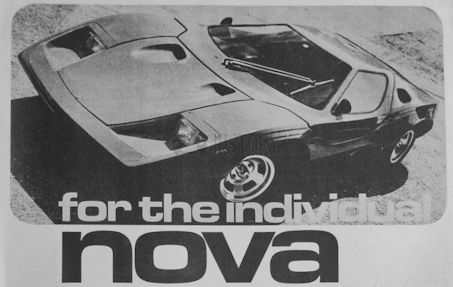 Nova Cars was a British kit car automaker, which was from 1978 to 1990 in Mirfield ,Yorkshire.

The Kit Car was designed in 1971 by Richard Oakes and designed by Phil Sayers . From 1971 to 1975 he was appointed by the Automotive Design and Development Ltd. (ADD) a car manufacturer, which was until 1973 in Southampton (Hampshire) and then in Accrington (Lancashire) resident. In 1978, Vic Elam bought the rights to the Nova. After the closure of his work, the rights went to Shashi Vyas , whose company Aerotec Nova still resides in London today . Until 1996 a few copies of the Nova were made; Today, the body shapes parts are stored in Cornwall .

The only model was the two-seater Nova , a sports car with front hinged, hinged roof, from the the basic ideas of the Ford GT40 and the Lamborghini Miura in a fiberglass body on a VW Beetle chassis with VW Beetle mechanics updates and more Lamborghini look on later models .

Richard Oakes designed Nova Its exotic styling belies its Volkswagen basis, but tuning equipment available now can give the performance on a par with its contemporaries. The cars spectacular opening roof canopy, which provides practical access when powered electro-hydraulically.

The price of the basic kit was £1500 plus VAT, and includes the GRP main bodyshell and all minor body panels. The canopy and parallelogram hinges are fitted, as are the windscreen, bonnet and engine cover. Modifications which should be made to the Beetle chassis include resiting of the gearlever and handbrake, decambering of the rear suspension, and in most cases lowering of the floorpan. Any Volkswagen engine from 1200 to 2200cc may be used, and adaptor plates are readily available to enable the use of
Ford, Lotus and Rover V8 power units. Components required to complete the car may be chosen at leisure from an extensive range stocked by Nova Cars, who can also assist with any stage of the build-up, right up to the construction of a finished car, as well as provide

OPTIONS
The deluxe kit at £2200 contains most items to finish the car, such as
wheels, tyres, seats and instruments. Options include wiring looms, carpet sets, engines and exhaust components. A very necessary extra is the hydraulic roof kit, costing around £300

Licensed buildings of the Nova were manufactured in Australia by Purvis Cars as Purvis Eureka . In France they were called Défi , in Italy Totem and Puma , in New Zealand Scorpion , in Austria Ledl , in South Africa Eagle , in Switzerland Gryff , in the United States Sterling and Sovran and in Zimbabwe Tarantula . In addition, there were many unlicensed copies. There were some versions Folding headlights or folding doors , but the basic shape of the car was always the same. 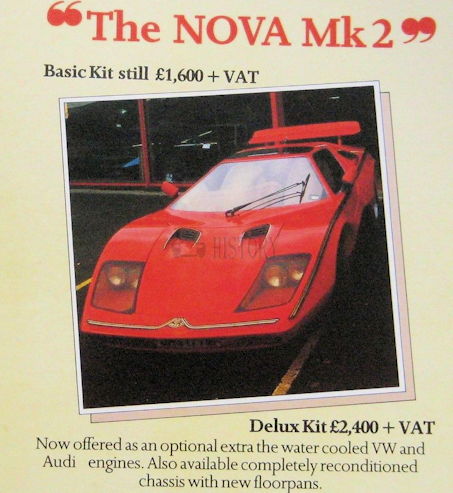 In film and television

Some versions of the Nova have appeared in films such as  Death Race 2000 ,Cannonball Run II and Condorman .