Automotive manufacturer of Andover , Hampshire.Great Britain from 1984 to 1987. 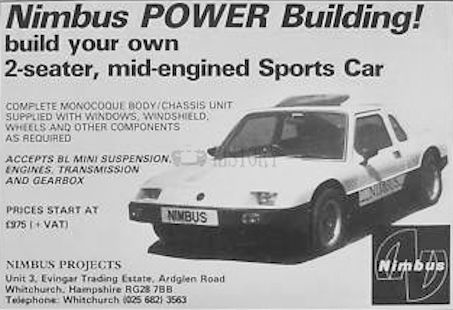 The designer Ian Shearer and Ian McClean donors founded in 1984, the company Nimbus Projects Limited in Whitchurch in the County of Hampshire . They started with the production of automobiles and kits . The brand name was Nimbus . In 1986, Ian Shearer got out and Anthony Coleman from Custom Molds got in. This was associated with the renaming in Nimbus Cars and the move to Andover in Hampshire. Ian McClean died in the same year. 1987 ended production. In total, about 24 copies were made.

The only model was the 2 seat, mid engine coupe . The base formed a special chassis in which a front subframe and engine of the Mini was mounted in the rear. The front suspension and brakes were originally from the Vauxhall Viva , but were redesigned. A four-cylinder alloy engine from the Hillman Imp was mounted as a mid-engine set up. The windscreen came from the Mk1 Ford Escort and the headlights from the VW Scirocco . The body was made of aramid and glass fiber reinforced plastic . An execution as Cabriolet only remained a prototype .