Automotive Car manufacturer of Wiltshire;United Kingdom From 1990 to 2000. 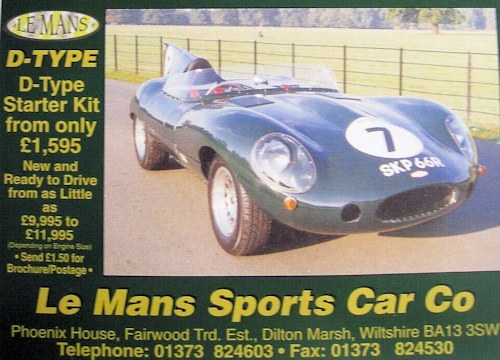 Le Mans Sports Cars was founded in the 1980s in Stoke-on-Trent ,Staffordshire . The production of automobiles and kits began in 1990 also distributed kits of Stardust Sports Cars from Whitton in the London Borough of Richmond upon Thames , led by Vic Minay. the company made replicas of  Jaguar C-Type , Jaguar D-Type and Jaguar XK-SS , which were offered  as complete vehicles and kits.

1997 David Yoxall took over the company, named it in Le Mans sports car company and moved the headquarters to Westbury in Wiltshire, by 2000, the production ended. Overall, developed over 40 copies.

The Stardust D-Type . This was the replica of the racing car Jaguar D-Type .The Le Mans D-type kit with its six cylinder Jaguar engine has been Developed to recreate the character and feel of the famous racing cars from the Fifties. Since its first appearance in 1990 the Le Mans D-type with any straigt 6 configuration engine can be fitted in the frame chassis-Bodies of the D-type are available in any colour at extra cost.

A cheaper starter kit version with a steel spaceframe frame formed the base of the car. The rear axle came from the Ford Escort mk2 . Then an open two-seater body was mounted. The four-cylinder engine with 2000 cc capacity came from the Ford Pinto  . Tiger Racing took over this project in 2000, made a prototype called the Tiger D-Type , and in 2001 passed it on to Lightning Motor Company , which in turn gave it to Leighton Motor Company in 2006 .

The Milano D-Type appeared in 1993 and was similar. However, the steel sub frame was redesigned, which could accommodate engines from Jaguar Cars and Triumph . From both versions together created about 41 copies.