Automotive manufacturer of Chichester, West Sussex; United Kingdom From 1998 to 2001. 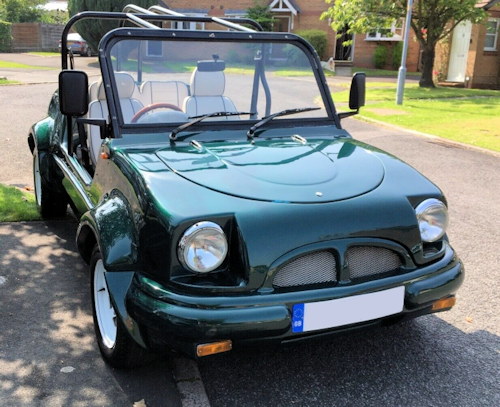 Khaleej Cars Limited is a British company in the field of automobiles and former automaker from the late 1990s to early 2000s. The brand name was Khaleej .

1998 Roger Whalley founded the company in Lavant at Chichester in the county of West Sussex. They started producing automobiles and kits. The sale of complete vehicles also to be sold to Arabia but by 2001, the production ended. In total, only a handfull of copies were created. As a car dealer, the company is still active.

The main model was the Scarab Runabout. This was a vehicle in the style of the Mini Moke . The base was the front wheel drive Ford Ka with a custom steel ladder chassis and bespoke glass fibre bodyshell.  The Buddy models, a delivery version, and the better-equipped Surf only made the prototype stage.