Automotive Manufacturer of Wymondham , Norfolk; United Kingdom from 2001 to 2008 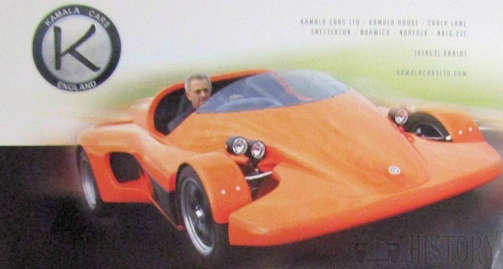 Kamala Cars England was a British manufacturer of sports car automobiles .The brand name was Kamala .

Tony and Mark Keen founded the company in 2001 in Wymondham, Norfolk . They started with the production of automobiles and kits . In 2008 the production ended. In total, about 16 copies were made.

The vehicle the K360R were a two seat sports car based on the model Kamala by Dax Cars avaliable from £19,995 in both left and right hand drive. In addition to the coupe , they designed an open variant as a roadster with a 2395 wheelbase avaliable in 4 colours . Fitted with wisbone suspension. A 2l Duratec engine from Ford was mounted mid-mounted behind the seats and powered the rear axle with 170 to 360 bhp options Turbo or supercharged . This model found about 15 buyers between 2001 and 2008.The Futuro had another front with fixed fenders. Although this model was offered from 2004 to 2008, only about one copy was made.

Automotive Manufacturer of Wymondham , Norfolk; United Kingdom from 2001 to 2008