Automotive Manufacturer of Kingsbridge , Devon; United Kingdom from 1986 to 1999 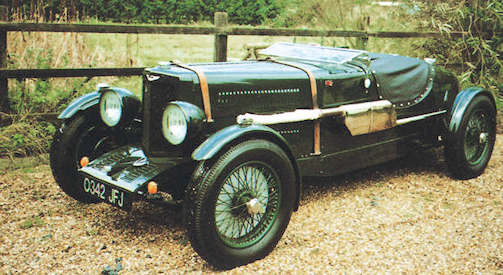 Fergus Engineering was a British manufacturer of replica automobiles in the 1980s and again later in the 1990s . The brand name was Fergus .

The tiny Devonshire firm of Fergus Engineering is one of those rare enterprises who survived almost exclusively on word-of-mouth business.

1986 Robert Kennedy Ping founded the company in Kingsbridge in the county of Devon . There he started producing automobiles and kits .  In total, more than six copies were created.By 1987 ended production. AIMS from the same place under the direction of Charles Smith took over the project in 1991, but did nothing. Projects of Distinction from Redditch in Worcestershire , led by Bob Lewis, continued production from 1992 to 1999 while maintaining the brand name.

First, there was the model Wren . This was a replica of the Aston Martin Ulster and only available as a complete vehicle.

With the Mosquito, a new model, the company has at last been gaining national interest. Designed as a very close copy of the 'thirties Aston Martin Ulster , Fergus' Mosquito will cost you £8,500 fully built and will include a tough box section chassis into which a Morris Marina 'B' series engine can be installed. The thick GRP main body section is supplemented by aluminium bonnet, side panels and valance. The sharp rear end hinges up for access to the boot and spare wheel whilst at the front' Morris Minor springs act as dummy replica front suspension! Though hardly a car to appeal to the mass market, there can be no denying that to the diehard original examples of which sell today for enthusiast the Fergus Mosquito Offers a to an earlier, altogether more glorious, motoring era.

Automotive Manufacturer of Kingsbridge , Devon; United Kingdom from 1986 to 1987