Automotive manufacturer of Frome , Somerset.Great Britain from 1982 to 2011. 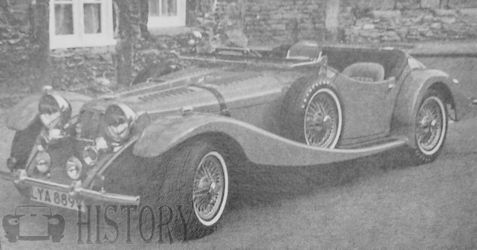 Adams roadster was a British company in the automotive and former classic kit car automobile manufacturer.

Dennis Adams, who previously led Adams Probe Motor , founded the company in 1982 in Frome , County Somerset . He started in 1986 with the production of automobiles and kits . The brand name was Adams . Ian Peter Fellows and Stephen Leslie Hart were directors from 13 July 1991.  1999, the car production ended. In total, about 18 copies were made.  On August 30, 2011, the company was dissolved.

Dennis Adams is perhaps best remembered for his most prolific design, the Marcos, but this extraordinary British stylist has had many other projects including the famous Probe series. In 1986 he re-entered the automobile world with a roadster bearing his own name. Drawing on home-grown and American influences, his touring sports car is both elegant and ostentatious. It's glassfibre body on a ladder chassis keeps the car's weight down to just over a ton, allowing the Jaguar engine to flex it's mechanical muscle very refined car to drive, it is upholstered in leather and is generously regaled in high quality fittings. Conversions can be effected on any Jaguar XJ6 at prices from around £15,000.

Its body made of fiberglass was mounted. An engine from Vauxhall Monza powered the first prototype . In the production models  six-cylinder engine from the Jaguar XJ 6 with 4235 cc and top sped of 125mph.