Automotive manufacturer of Great Britain from 1898 to 1918. 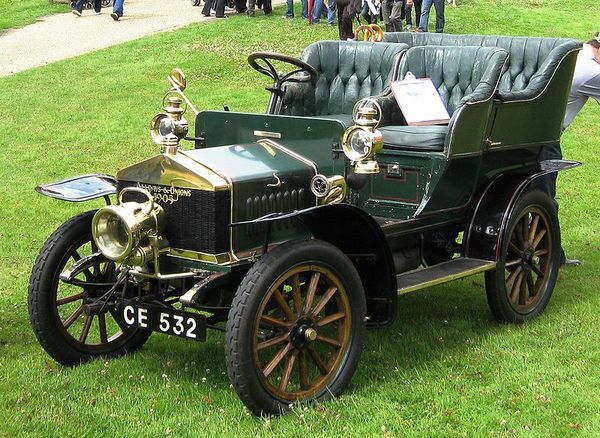 Alldays & Onions was an English automobile maker, it manufactured cars from 1898 to 1918. The cars were sold under the Alldays name. The company also built an early British built tractor, the Alldays General Purpose Tractor.

The Alldays & Onions Pneumatic Engineering Co. of Birmingham, was a company founded in 1889 by the merger of the long established Onions (formed by John Onions in 1650) and William Allday & Co. (formed by William Allday in 1720) engineering companies. They became known for their engineering and blacksmithing equipment. Like many such companies at the time they turned to bicycle manufacture and sold a range under the Alldays name. They also started making motorcycles in 1903 under the Alldays-Matchless name; these had no connection with the London based Matchless company, and in 1915 presumably following representations from them, the name was changed to Allon. Manufacture of these continued until 1927.

In 1898, the company produced its first car, the Traveller, a quadricycle made in private and commercial forms, steered by a wheel. It had an unsprung rear end, power generated by a 4 hp De Dion single-cylinder motor. However, series production did not start until 1903/4 with the 7 hp model. Larger commercial vehicles of up to 5 tons were also made in the years preceding the first World War and saw service during the conflict.

The company hit commercial success with the 1.6-litre, vertical-twin side-valve 10/12, which was made from 1905 to 1913. It was popular with commercial drivers and did well in period formula events and hill-climbs. A 16 hp 4-cylinder joined the lineup in 1906, and in 1908, the Enfield Autocar Co. was acquired. Shortly afterward, the range was rationalized, with most models being sold under both brand-names. The Alldays contribution to the equation was the well-established twin- and four-cylinders that put out 14 and 20 hp, always shaft-driven. A 30/35 hp six-cylinder was listed from 1911 to 1914, compressed-air starters being optional in 1911. In 1913, the 990 cc V-twin Midget cyclecar was introduced, featuring air cooling and shaft drive, selling at ₤138.10s. An 1100 cc 4-cylinder version with a bullnose radiator appeared in 1914, popular at the price of ₤175. Pair-cast side-valve four-cylinders rated at 12/14, 16/20, and 25/30 hp filled out the immediate pre-war offerings.

Alldays & Onions merged with Enfield, a company they had owned since 1907, and produced cars called Enfield-Allday until 1925.