While the 501 and 502 model numbers were discontinued in 1958, variations of the model, with the same platform and body, were continued until 1963.

Production at BMW's motor car factory in Eisenach restarted in late 1945 with pre-war BMW models. However, Eisenach was in the Soviet occupation zone, and the cars were not being manufactured by BMW AG, but by the Soviet manufacturing entity Autovelo. Despite not being made by BMW, these cars bore the BMW logo and were being sold as BMWs.

Meanwhile, BMW AG restarted manufacture on a much smaller scale, starting with pots and pans, and eventually moving up to household hardware and bicycles. Eventually, with permission from the U.S. authorities and funding from the banks under which BMW had been put into receivership, they began manufacturing motorcycles in 1948.

To end Autovelo's continued trademark infringement, the Eisenach branch of BMW was dissolved effective 28 September 1949 and was legally severed as at 11 October. Without any legal arguments to continue using BMW's name and logo, Autovelo changed the name to EMW (Eisenacher Motoren Werke) and changed the blue colour in the logo to red.

Kurt Donath, technical director of BMW and general manager of the Milbertshofen factory, was soliciting manufacturers, including Ford and Simca, to produce their vehicles under licence. In particular, Donath was looking to produce old products under licence, so that he could buy tooling along with the licence.

While Donath was trying to find a car to build under licence, chief engineer Alfred Böning developed a prototype for a small economy car powered by a motorcycle engine. Called the BMW 331, the prototype used a 600 cc motorcycle engine, a four-speed gearbox, and a live rear axle. The body was designed by Peter Schimanowski and resembled a BMW 327 in miniature.

The BMW 331 was proposed for production to the management, where it was vetoed by sales director Hanns Grewenig. Grewenig, a banker and former Opel plant manager, believed that BMW's small production capacity was best suited to luxury cars with high profit margins, similar to the cars BMW made just before the war. To this end, he had Böning and his team create the car that would become the 501. 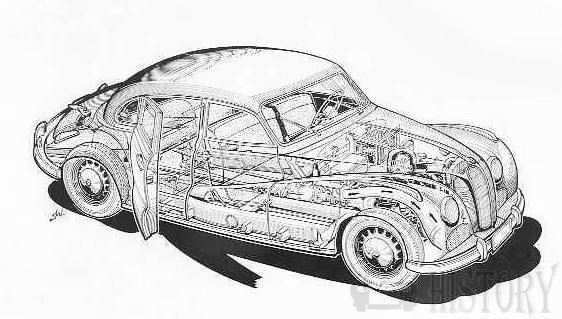 The four-speed gearbox was not bolted to the engine, but was a separate shaft-driven unit mounted between the second and third crossmembers. While the remote gearbox placement led to a complicated linkage to the column-mounted shifter, resulting in vague shifter action, it also improved legroom for the front passengers.

The body was designed in house by Peter Schimanowski. After seeing the prototype, BMW's management commissioned Pininfarina to build an alternative. The Pininfarina prototype was thought to be too similar to his design for the Alfa Romeo 1900 saloon, so BMW stayed with Schimanowski's design. The steel body was far heavier than Schimanowski had calculated it to be, resulting in the completed car having a dry weight of 1,430 kilograms (3,150 lb).Performance suffered as a result, with a top speed of 135 km/h (84 mph) and acceleration to 100 km/h (62 mph) taking 27 seconds, both of which compared unfavourably with the six-cylinder Mercedes-Benz 220.

One innovation was the attention paid to passive safety. The car featured a robust chassis providing above average side impact protection, an unusually short steering column with the steering gear set well back from the front of the car, and a fuel tank placed in a carefully protected location above the rear axle in order to minimize fire risk in the event of an accident.

The 501 was introduced to the public in April 1951 at the Frankfurt Motor Show, as was its less expensive, production-ready rival, the Mercedes-Benz 220. The 501 made an impression on the public with its solid engineering and its extravagance. Its list price of more than fifteen thousand Deutsche Mark was about four times the average salary in Germany at the time.The public nicknamed the 501 "Barockengel" (Baroque Angel) in reference to the curved, flowing style of the body.

Development issues delayed the start of production until late 1952, and even then BMW still did not have equipment for pressing body panels in operation. The first 2,045 four-door saloon bodies were built by Karosserie Baur and were shipped from Baur in Stuttgart to BMW's factory in Munich for assembly. The thousandth 501 was completed on 1 September 1953.

The 501 and derivatives built at BMW were four-door saloons. Coupe and convertible versions were available as custom orders from Baur or Autenrieth.

A road test of the 501 in March 1953 by Auto- und Motorrad-Welt reported better than average wind resistance, as well as good ride quality and an effective heating system. The fuel consumption was reported to be 10.3 L/100 km (27 mpg-imp; 23 mpg-US).

Development of the BMW 501