The Tomaszo PS fiberglass products mbH was a manufacturer of automobiles from Austria .

Wilhelm Tomaszovits founded the company in Achau in 1977 and began producing automobiles. The brand name was Tomaszo . 1993 ended the production. In addition, the company introduced plastic bodies for Ledl .

Models called SL Buggy or Buggy S was a VW buggy . The base provided a chassis from Volkswagen Beetle , which was reduced by 27 or 40 cm. The P 35 was a replica of the Alfa Romeo P 3 of 1930. The technology came from the Alfa Romeo Alfetta .

There were also the Mercedes-Benz SS K beetle-base with a body made of plastic , the Ford V8 Coupé of 1934, the AC Cobra with the engine of Ford Scorpio , the Ford GT 40 with a V6 engine with 3000 cc displacement , the MG TD , Lamborghini Countach and Porsche 356 .  In addition to the aforementioned engines were four-cylinder engines from Ford , V6 engines from the Renault 30 and other Moren to choose from. 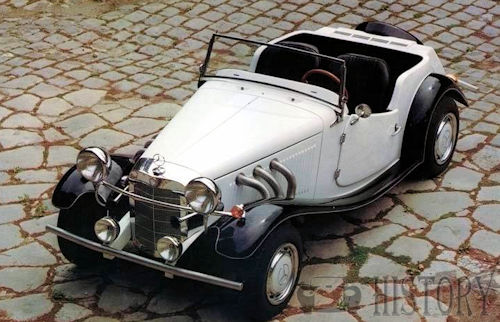 The Ultra C was offered since 1990 as a kit car . The kit consisted of a tubular space frame, wishbone, frame cover sheets, steering linkages, pedals, two tanks of aluminum , body made of polyester resin , windshield and side windows and headlight covers from plexiglass . As a drive either served a four-cylinder engine from Ford Cosworth with 2,000 cc or V6 engine from the Renault 30.  The distribution was carried out by Saier automobile in Germany and the HS Replica Cars AG in Switzerland .