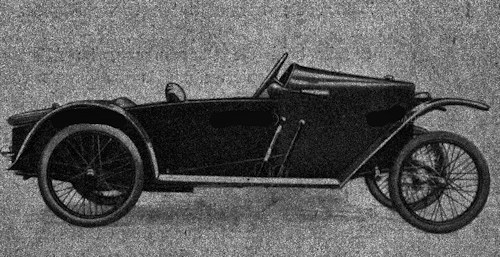 Baja was a car brand from Austria in the 1920s. The brand name was Baja.

The company N. von Jakabffy GmbH started in 1920 with the production of automobiles the designer was Max Bartsch. in 1921, first built as Ing. Max Bartsch & Frank man and later Baja Cyclecar Co. As of 1922, the sales and the successful export by the Baja Cyclecar Vertriebs GmbH.  In 1924, took over Amender Werke AG production. All companies were based in Vienna. Baja stood for Ba rtsch & Ja kabffy.

The vehicles built were cycle cars that featured the absence of a chassis. The body made of plywood offered space for one or two people. The vehicles were also used in car races such as the Riederberg race. The empty weight was 250 kg. First, a provided air-cooled single-cylinder engine from Hiero with 460 cc displacement and 3.5 hp power for the drive. As of February 1922, there was a water-cooled single-cylinder engine with 602 cc capacity.  In addition, a was two-cylinder engine with 790 cc capacity offered. The engine was mounted in the rear, driving via a chain to the right rear wheel. The transmission had three gears.