BMC ADO16 were economical small family cars built by the British Motor Corporation (BMC) and, later, British Leyland. It was first launched in 1962 and the Austin Countryman from 1966 Although most of the cars were manufactured in England, this estate car/station wagon had 2 doors plus 1 rear door with 4-5 seats with option for reclining backrests.

The original Mark I models were distinctive for their use of a Hydromantic suspension with independent, wishbones, hydrolastic (liquid) rubber cone springs, hydraulic connecting pipes to rear wheels. In March 1966 just before the launch of the mark II a three-door station wagon became available, badged as the Austin 1100 Countryman with carrying capacity of  882 1b, 400 kg. The engine from 1966 and available until 1974 was the 1098 cc A-Series. 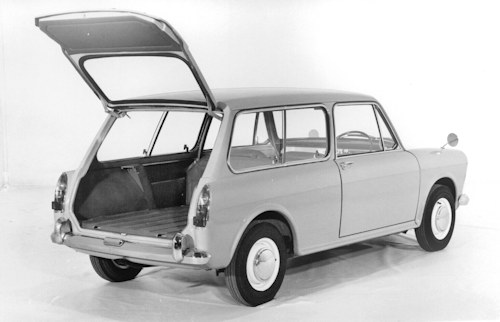 From 1967 the new mark II version was first built at the end of May 1967. And The Mark II versions of the Austin models were announced, with the larger engine making it into these two makes' UK market ranges in October 1967 as the Austin 1300. An 1100 version of the Mark II continued alongside the larger-engine models. On the outside, a slightly wider front grille, extending a little beneath the headlights, and with more detailing, differentiated Austin Mark IIs from their Mark I predecessors Austin and Morris grilles were again differentiated, the Austin having wavy bars and the Morris straight ones. The 1100 had been introduced with synchromesh on the top three ratios. And now with the 1,275cc engine as the 1300 Countryman along with option for automatic gearbox, fitted with hydraulic torque with 2 conic bevel gears (twin enteric differential-like gear clusters) with 4 ratios (1st 2.689, 2nd 1.846, 3rd 1.460 rev 2.689), operated by 3 brake bands and 2 multi-disc clutches.

In September 1971 the Mark III was introduced and built until 1974.The ADO16 was then replaced by the Austin Allegro. This ADO16 production overlapped for more than a year with the Allegro.

The Austin Countryman 1100 estate version from 1966, appeared in the "Gourmet Night" episode of Fawlty Towers, in which Basil Fawlty (John Cleese) gave it a "damn good thrashing". This episode was also first shown in the 1970s