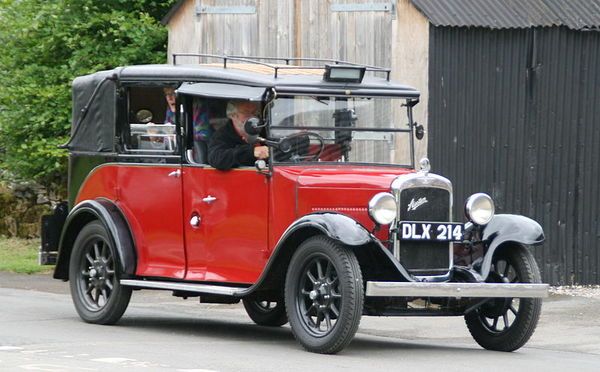 The Austin London Taxicab used a modified Austin Heavy Twelve-Four chassis clothed with new bodies designed by London's largest taxicab retailer and dealer Mann & Overton and made for Mann & Overton by London coachbuilders. From 1930 to 1934 this first Austin London taxicab was colloquially known as the High Lot or Upright Grand. On a new chassis and thereby much lowered its appearance was revised in 1934 and it was re-named by Austin the Low Loading taxi.

Previously Austin had only provided hire car chassis not troubling to make major amendments to that chassis to comply with Metropolitan Police regulations for London taxicabs.

Will Overton, director of the car dealership Mann & Overton, had been selling Unic taxicabs in London since 1906. In 1924 their business with its French-made Unics had provided almost 80% of the new taxicabs bought in London. In 1925, with effect from 1 May 1926, McKenna duties were imposed on commercial vehicles to protect UK manufacturers from imports and in spite of Unic's local assembly operation in Cricklewood which opened in 1928 it was no longer possible to supply London with French Unic taxicabs at an acceptable price. So William Overton approached Herbert Austin about modifying the Heavy Twelve-Four hire car chassis so that it would comply with the London Conditions of Fitness. It had been announced in 1927 that those regulations would be lightened with effect in 1928. In view of the easing of the Police regulations and the enormous gap in the market left by imported vehicles Austin duly modified their hire car chassis to suit and Mann & Overton arranged for their catalogued three standard bodies made in Greater London by: Strachan or Vincent or—for £5 more—Jones.

Because the overall height of the 1930 version was much greater than the competition it received the nickname High Lot or Upright Grand. This design gave top hat wearing customers plenty of room. It was soon outselling the Beardmore and Morris-Commercial versions.

Their new Low Loading (LL) taxicab was introduced in 1934 with an overall height some 7 inches lower arranged by using the redesigned back axle (the final drive was switched from overhead to underslung) and dropped cross-braced frame introduced by Austin for their new Light Twelve-Four and Light Twelve-Six cars.

All exterior fittings were chromium plated. The list price was GB£395. Hire purchase terms were £50 deposit with monthly installments of £10, for a total price of £472, or £18 less if purchased completed in 40 months (rebate reduced by £3 for each additional month.)

There was one more variant before the outbreak of war, both grille and windscreen were raked, the grille and the wings (mudguards) were flared and matched those of the Austin Twelve saloon introduced in 1934. Few were made before the outbreak of war ended manufacture. These taxicabs proved to be the last with a landaulette body which was forbidden by new regulations issued soon after the war.

After World War II, Mann & Overton decided that it needed a more up-to-date design. So it was agreed that Austin would supply the engine/chassis with the body supplied by Carbodies in Coventry, although the body was actually designed by Austin's chief body designer Jim Stanfield. In 1948 a new Austin taxi appeared on the streets called the FX3. It was soon the market leader. Although in 1952 a diesel engine from Perkins Engines was available as a conversion, by 1954 Austin was producing their own 2.2 litre diesel engine as a factory fit. Also made by Austin and Carbodies was the hire car FL1 which was almost identical but it had no luggage space by the driver having instead a bench seat and there was no roof sign.