The petrol-powered Audi R8 race car was in 2006 replaced by the new Audi R10 TDI Diesel; however, the need to further develop the R10 meant that the R8 saw action in a few races leading up to the 24 Hours of Le Mans.

In 1997, sports car racing and especially the Le Mans 24 Hours was popular among factories like BMW, Mercedes-Benz, Porsche, Toyota, Nissan Motors and others. At that time, Audi Sport boss Wolfgang Ullrich started to evaluate the options of joining.

With the upcoming American Le Mans Series also providing a stage for the US-market, Audi announced plans in 1998 to compete in 1999, with the R8R and powered by a 550 hp (410 kW) V8 turbo. As it was considered the better choice for a whole race due to less weight and wider tires, Audi ordered an open top roadster from Dallara, to be developed and run by Joest Racing.

Yet, during the autumn of 1998, after the necessity of GT1 homologation was dropped in favour of LM-GTP prototypes, regarding the speed and success of these closed GT coupés like the Porsche 911 GT1, Mercedes-Benz CLK-GTR, and the Toyota GT-One, Audi also ordered their newly acquired Norfolk based RTN (Racing Technology Norfolk, led by Tony Southgate) to build a closed-cockpit car using the same drivetrain.

The ACO rules for closed-top prototypes allowed cars to run with larger air restrictors, resulting in more power (about 600 hp), which resulted in a higher top speed in combination with the lower drag. To compensate this advantage over the duration of a race, the LMGTPs were limited to smaller tyres and smaller fuel tanks.

Following a period of testing, two R8Rs debut at the 1999 12 Hours of Sebring. The BMW V12 LMR won, which was a strong sign towards the race in France. The already tested open-top Audi R8R, entered by Joest Racing was not fast enough to challenge for a win, finishing 3rd.

After further tests and modifications, the Audis returned for Le Mans. The new debuting R8Cs lacked pace and unfortunately suffered mechanical gearbox woes. Lap times were 10 seconds down from the leading LMP and LMGTP competitors. Joest's R8Rs ran steady, yet still was too slow to run for pole position. After a race which saw the spectacular flights of the Mercedes-Benz CLR as well as leading cars of Toyota and BMW crashing out, the Audi R8R took 3rd and 4th behind the surviving #15 BMW V12 LMR and the Japanese-driven Toyota.

Based on the experiences, Audi decided to regroup for 2000, and built a new R8 spyder together with Joest and Dallara. The British-built R8C coupe was retired, but Audi-owned Bentley developed the concept of the R8C closed cockpit LMGTP and entered the Bentley EXP Speed 8 in 2001, winning the race with the Bentley Speed 8 in the 2003.

After the 1999 Le Mans shame, Mercedes retired from GTs to focus on the return of the DTM touring cars in 2000, as well as on F1. Toyota and BMW also went to F1, with BMW at least continuing to race for two years in the ALMS, where the open roadster of Bill Auberlen also suffered a "back flip" during the Petit Le Mans at Road Atlanta in 2000, as the closed-cockpit Porsche of Yannick Dalmas had done in 1998. Despite the BMW V12 LMR not receiving further development, the German team Schnitzer Motorsport was almost as effective as Joest. Still the BMW V12 LMR could not match the Audi R8's might in the championship and lost almost every race against it. BMW returned to race the BMW M3 in the GT class since, dominating in the ALMS and in WTCC as well as at the 24 Hours Nürburgring.

This left only Porsche as a major possible challenger for 2000 — however the Porsche LMP project was scrapped before it had a chance to race. Rumours at that time said that Ferdinand Piech himself made them stay away, using his influence as a co-owner of Porsche as well as his management role at Volkswagen, which would develop the upcoming SUV VW Touareg in cooperation with the Porsche Cayenne. The Porsche V10 racer was turned into the Porsche Carrera GT instead.

The Audi R8 is a sports-racing car prepared for the LMP900 class at Le Mans and in the American Le Mans Series. The car was developed by Audi Motorsport and Joest Racing and debuted in 2000, winning the 12 Hours of Sebring.

The R8 won a hat trick at Le Mans in 2000-2002, campaigned by Audi Sport Infineon Team Joest and driven by Tom Kristensen, Emanuele Pirro and Frank Biela. First time out in 2000, the team won a 1-2-3 finish. Since then, the Audi R8 has won numerous championships and races, including further wins for 'privateer' teams at Le Mans in 2004 and 2005.

The R8 is powered by a 3.6 L Audi FSI V8. FSI stands for Fuel-Stratified Injection, which is a variation on the concept of gasoline direct injection developed by VW which maximizes both power and fuel economy at the same time. FSI technology can be found in products available to the normal public, across all brands in the Volkswagen Group.

The power supplied by the R8, officially listed at about 610 hp (455 kW) in 2000, 2001 and 2002, 550 hp (410.1 kW) in 2003 and 2004 and 520 hp (388 kW) in 2005, is sent to the rear wheels via a Ricardo five-speed sequential transmission with an electro–pneumatic gear change. Unofficially, the works-team Audi R8 for Le Mans (2000, 2001 and 2002) is said to have had around 670 hp (500 kW) instead of the quoted 610 hp (455 kW). The numbers were quoted at speed, and were due to the car making 50 extra horsepower due to twin ram-air intakes at speeds over 150 mph (240 km/h). Official torque numbers were quoted for this version of the engine at 516 lb·ft (700 N·m) at 6500 rpm. The equation for horsepower (torque divided by 5250, multiplied by rpm) for these numbers produces a horsepower rating of 638 horsepower (476 kW) at the same 6500 rpm (516/5250*6500=638). The Audi R8's structure was designed from the very beginning to expedite parts changes during the race. The car has a chassis that has been likened to a Lego model — anything on the car can be changed and changed quickly. During its campaign, the Joest pit crew was able to change the entire rear transaxle of a damaged R8 — a process which usually takes between one and three hours — in as low as three minutes and 16 seconds. The reason for this was that the transmission, rear suspension and rear subframe were built as one unit. The car had numerous quick-connect hoses and easily removable bolts. The whole rear section of the car could be removed as a whole and a new back half installed with the help of a crane. The Automobile Club de l'Ouest (ACO), organizers of the 24 Hours of Le Mans and the American Le Mans Series acted quickly to void this advantage by mandating the gearbox casing be the same item through the duration of the race, with only the internals being allowed to be changed. However, the R8 still had quicker access to the gearbox internals than any other car due to its quick-change construction . This was critical as the gearbox was the weak link in the car.

The R8's structure and body are both composed of carbon fibre, a strong, lightweight polymer material.

Performance - from top speed to acceleration - was, as in most race car cases, variable depending on the car's setup. The highest speed of the R8 at Le Mans was 338 km/h (210 mph) in the practice sessions of the 2002 Le Mans 24 Hours Race. A low downforce setup could generate about 350 km/h (217 mph).

Audi Sport's program saw tragedy in 2001 when on April 25, popular ex-F1 driver Michele Alboreto died in an accident after suffering a high-speed tyre failure during an R8 test session at the Lausitzring in eastern Germany.

The Bentley Speed 8, which ran at Le Mans from 2001 to 2003, winning in 2003, utilised a heavily modified 4.0 L version of the V8 engine from the Audi R8 . The Bentley racing effort was campaigned by Team Bentley (Apex Motorsport) with assistance from longtime R8 competitor Joest Racing and Audi Sport UK. After 2002 the Joest factory team dropped its R8 campaign and left it to the privateers. Restrictor changes brought the power down to 550 bhp for anyone still racing with the R8. However the maximum torque hardly changed. Tom Kristensen, who won the previous three 24 Hours of Le Mans races in an R8, was assigned to drive the Bentley Speed 8, and helped guide the team to victory. (Kristensen went on to win the 2004 and 2005 races in an Audi R8). There is some similarity between the Bentley Speed 8 and the Audi R8's successor, the R10 TDI.

During the 2005 season, it was evident that its time at the front of the pack was drawing to a close. Audi had made the development of the Audi R10 TDI diesel public, and cars from other manufacturers and teams started to catch up in terms of on-the-track speed. The ACO still felt that the R8 needed to be kept in check, therefore they reduced the restrictor size on the R8's engine, due to the car not meeting new hybrid regulations, and stipulated the car shall carry ballast weight in an attempt to make the races more competitive. The R8 was restricted even further to only 520 bhp. At the 2005 Le Mans, the Audis failed to qualify on pole position; the fastest R8 started the race in third position. However, the car was able to outlast all other competitors to eventually take its fifth checkered flag at the Circuit de la Sarthe and the 24 Hours of Le Mans. This victory was also notable since it was Tom Kristensen's 6th straight 24 Hours of Le Mans victory, and a record 7th overall, beating legendary driver Jacky Ickx's previous record of 6 career 24 Hours of Le Mans victories. To date the R8 remains one of the fastest petrol powered LMPs, setting a 3:29 at Le Mans, which was beaten only by the Lola-Aston Martins. However, the R8's best finish was at 379 laps, which is more than the Lola-Aston Martin's best at 373 laps.

Two 2005 Audi R8's are driven by Doug Smith and Travis Engen in the GTP-WSC Enduro class of the HSR championship. 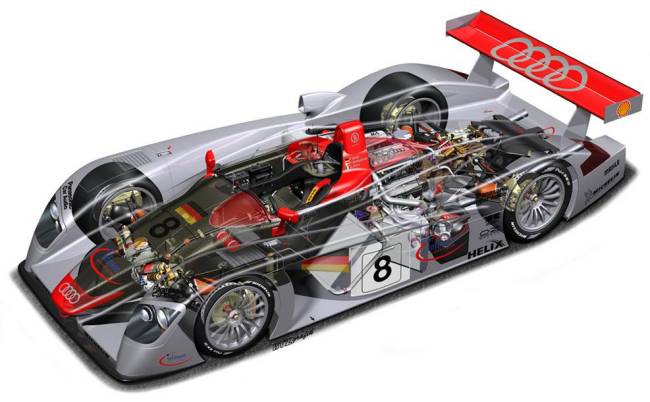