F103 is the internal designation for a series of car models produced by Auto Union in West Germany from 1965 to 1972, derived from the earlier DKW F102. To signify the change from a two-stroke to four-stroke engine, the DKW marque was dropped in favour of Audi, a name dormant since before the Second World War.

The first model was launched simply as the Audi, later being renamed the Audi 72 (72 being the nominal power output of the engine in Pferdestärke).

The more powerful Audi 80 and Audi Super 90 sports saloons appeared in 1966: in 1968 the arrival of the less powerful Audi 60 completed the range. 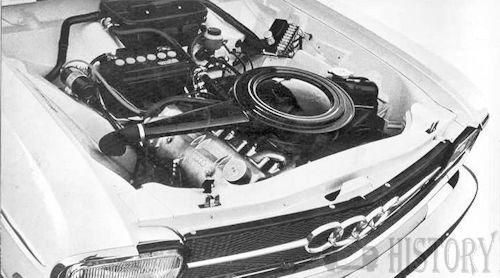 The F103 series were equipped exclusively with four-cylinder four-stroke engines. These were longitudinally mounted. This combination of front-wheel drive, which Auto Union's DKW brand had pioneered during the 1930s, and the longitudinal positioning of a four-cylinder engine would provide the basic template for Volkswagen's successful new Passat as well as the Audi models Audi 80 and Audi 100 after Volkswagen acquired the business from Daimler-Benz late in 1964. Since the chassis on the F103 was taken from the DKW F102 with a 3-cylinder two-stroke engine, the longer engine meant that the cooling system had to be offset to the left of the engine instead of the normal position in front of it.

The engines of the F103 series were a joint development with Daimler-Benz who owned Auto-Union at the time (from 1958 to 1964). They were dubbed the Mitteldruckmotor (medium pressure engines), because of their unusually high compression ratio, mid-way between conventional petrol and diesel engines.

The car came with a four-speed manual transmission.

Inboard mounted front disc brakes were featured, which was still unusual in the mid-size car market at this time. The rear brakes followed the more conventional drum configuration.

The F103 bodyshell was a development of the earlier DKW F102. The engine compartment had to be extended so that the new four-cylinder engine could be accommodated. The front and tail were also cosmetically revised: Audi F103s sold in Europe all featured quasi-rectangular headlamps which were becoming fashionable at the time, whereas the F102 had used round headlamp units.

All Audi F103 models were offered as sedans with two and four doors. However, the two-door saloon/sedan was not sold in markets with little demand for two-door cars of this size, such as Italy and Britain.

With the exception of the Audi Super 90, the F103 series were available also as three-door station wagon models. Making its debut at the Geneva Motor Show in March 1966, this was called, like the Volkswagen estate/station wagon models, Variant.

Initial changes were concentrated under the hood/bonnet where during the first two years of production the specification for the Solex carburetor was changed twice and in September 1967 the very high compression ratio was reduced from a (then) eye watering 1:11.2 to 1:9.1 which addressed serious "teething problems" with the engine as originally launched.

In September 1967 servo-assistance for the brakes became an option, the brakes on all but the basic model now being controlled using twin braking circuits, and by (in Germany) the final months of 1968 the range had settled down to three models, with the entry level Audi 60 powered by a 55 PS motor, the less basic Audi 75 producing 75 PS and the Audi Super 90 with 90 PS, able to challenge the performance image of some of the smaller BMWs.

Visually the car changed very little, but keen eyed observers would have noticed a discretely modernised rear from August 1970, with slightly larger rear lights and a reshaped bumper. The fuel filler moved from its location to the right of the license plate on the rear panel to a position on the right hand wing of the car, and following a general trend of the period was now shielded by a flap that was flush with the bodywork. Inside the 1970 upgrade also involved a reconfigured dashboard.

During the early 1960s, Auto Union was in commercial retreat: the Audi F103 was a relative success when compared with recent Auto Union products, even if its commercial success was trumped by subsequent Audi models. In July 1967, it was reported that 100,000 Audis had been completed:production of the F103 had by now built up to a rate of almost 40,000 per year and the company was moved to deny speculation that another new Audi model would be presented at the Frankfurt Motor Show in the Autumn / Fall of 1967. (The Audi 100 was introduced only towards the end of 1968.)