The B3 obtained a major facelift for the 1992 model year in 1991. It was from then on known internally as the B4 (or Typ 8C). Changes from the B3 included a longer wheelbase, a fully redesigned fuel tank and rear axle to enable the use of folding seats, 15" roadwheels with more prominent wheel arches, redesigned and painted rear and front bumpers, as well as higher-quality materials for the interior. The front grille was merged with the bonnet and given a bolder look.

The B4 also marked the beginning of Audi's move into the German luxury mid-sized vehicle segment, which until then was clearly dominated by Mercedes-Benz and BMW. On the European market, and in Germany in particular, the B4 and its variants were highly successful and popular.

In Europe, the 90 name was discontinued, and all saloons were badged as 80, regardless of which engine they had. Audi of America went the opposite direction, and began selling the saloon as the 90. B4s for the American market typically offered more luxury even in the standard version, such as automatic transmission, cruise control, air conditioning and leather seats, all of which were usually optional at additional cost (or standard) on European models.

All petrol versions could be ordered with quattro permanent four-wheel drive; at the time, however, it could only be combined with a five-speed manual transmission. Additionally, Audi built about 2500 units of the Quattro Competition for the German and European market. It was a street homologation of the B4-based Super Tourenwagen Cup (STW) race car saloon with four-wheel drive and a modified 140 PS, 16-valve, two-litre petrol engine. The powertrain had its roots in the two-litre, four-cylinder inline engines that most European Audi 80s were equipped with at the time. On the outside, the Quattro Competition featured the same bumpers as the S2, V6 headlights, and a rear wing mounted on the bootlid. Together with the S2 and the RS2 Avant, the Quattro Competition has become an increasingly rare and highly sought-after collector's item.

Together with the saloon, Audi produced a B4-based estate, the Audi 80 Avant, and a convertible, the Audi Cabriolet, which was largely based on the B3 Coupé. This meant that Audi now had saloon, coupé, cabriolet, and estate variants of the 80 available to European customers. For the North American market, however, Audi only sold coupés during the 1990 and 1991 model years, and the station wagon was never officially available. The Cabriolet was the company's first soft-top since the Auto Union 1000 Sp of 1959. Initially available with the 2.8-litre V6, and then 2.6-litre V6 were offered later. Heavily engineered to retain the structural strength of the Coupé (with which it shared sports suspension), its screen was reinforced to preclude the need for a roll bar.

As of the 1994 model year, a limited edition model, known as Europa, was introduced on the European market. It could be ordered both as a saloon and an Avant. It was factory-equipped with power mirrors, alloy wheels, rear seat headrests, an airbag steering wheel, and offered a choice between power sunroof or air conditioning. It came in five different special colours. For "regular" 1994 B4 saloons and Avants, standard features as well as options available were stepped up too, including an airbag steering wheel and redesigned door liners (standard), and passenger airbags and a built-in engine immobiliser (optional).

The 80-series was effectively replaced by the new Audi A4 in 1996, a variant of the 1996 Volkswagen Passat. By that time it was feeling very dated in comparison with more modern rivals like the E36 BMW 3 Series. Production ceased at a time when prestige European manufacturers were making the transition of older executive saloons to newer models based on newer platforms in the compact executive car market.

Both the Coupé and the Cabriolet were effectively replaced by the first-generation Audi TT coupé and roadster, sold between 1998 and 2006. The B4 platform saloon was replaced by the Audi A4 for the 1995 model year (1996 in North America), followed by a new A4 Avant later in 1996. A mid-sized convertible was not available again until 2002, when the A4 Cabriolet was introduced. Audi has released a new mid-sized coupé for the 2008 model year, which is now known as the Audi A5.

Audi developed a sports version of the Coupé in 1990, called the Audi S2. This featured the well-proven 2.2-litre in-line five-cylinder 20-valve turbo petrol engine from the Audi 200 20V, which was derived from the engine used in the Audi Quattro. A similar version of the engine was used in the Audi 100 based S4 (the 'Ur-S4'). The S2 came as standard with quattro permanent four-wheel drive, and featured a heavy-duty 5-speed manual transmission.

In 1993, the S2 received some cosmetic updates, including new AVUS style alloy wheels, elipsoid beam headlamps and clear front indicator lenses. This coincided with the introduction of the five-door S2 Avant, along with a limited run of four-door S2 saloon/sedan models, of which 306 were produced. The S2 saloon and Avant are actually based on the next generation B4 platform, and feature a lot of similarities in the rear axle support system to the later B5 A4 quattro. The B4 platform S2 Avant was also used between 1993 and 1995 as the basis for Audi's RS2 Avant super-sports estate, which was modified for Audi with assistance from Porsche. 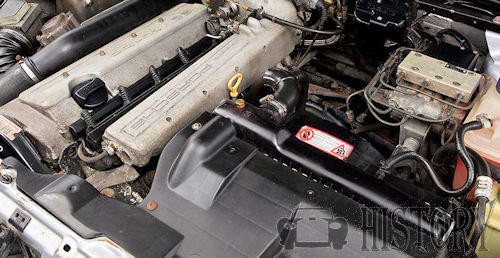 The Audi RS2 was generally only available as an Avant, although four 4-door saloon models were officially produced by the factory, including one for the chief of the RS2 development programme. The RS2 was at least partially assembled at Porsche's Rossle-Bau plant in Zuffenhausen. Prior to manufacturing the RS2, the Porsche Zuffenhausen assembly line was busy producing the high-performance W124 bodystyle Mercedes-Benz 500E. The RS2/Porsche link is further exemplified by the RS2's dual circuit Porsche braking system (wearing Brembo calipers with a Porsche name), 7.0Jx17" alloy wheels which were identical in design to the Porsche 911 Turbo wheels of that era, and side view mirrors are also borrowed from the Porsche 911 Turbo. Additionally, the word "PORSCHE" is inscribed in the RS2 factory emblems affixed to the tailgate and front grille, and on the engine's inlet manifold. Porsche modified the Avant S2 body optics, added more power, better brakes, bigger anti-roll bars to front and rear, fine tuned the interior – and a super-sports estate was born. Porsche's involvement in the project was on the strict understanding that a coupé model would not be produced, as this was felt to be too close to Porsche's own products. 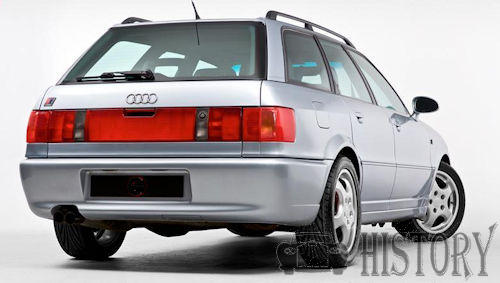