The genesis of the Rambler American began with the Nash Rambler, introduced in 1950. AMC President George Mason believed in small cars, and had introduced the Austin built/Nash designed Metropolitan in 1954. The Rambler line grew to a larger size (108") in 1956. The cost to produce the Metropolitan were rising, so AMC decided to reintroduce a modified version of the 1955 Nash Rambler (the last 100" wheelbase model). The domestically produced replacement let AMC control costs more closely. New AMC president George Romney also wanted to build momentum in AMC's challenge to the domestic Big Three automakers by adding a third car line. The introduction of the new low priced sub compact Rambler was ideal—America had just entered into a recession in 1958 as the car was introduced.

The first proposals were to modify AMC's captive import by extending the Metropolitan with a station wagon type roof design to make room for four passengers. However the 85-inch (2,159 mm) wheelbase of the Met severely limited the necessary interior room, and costs of the overseas built model were harder to control. On the other hand, the company had retained the tooling from its 1955 model Rambler. The old model's 100-inch (2,540 mm) wheelbase fit between its bigger family-sized 108-inch (2,743 mm) wheelbase Ramblers and the small import. The old design could be slightly modified and then used for the basis of the "new" American.

American Motors' financial condition meant it could not afford to develop an entirely new model. The reintroduction of the old model leveraged the Rambler's renown for fuel economy and wins in the Mobil Economy Runs, with the consumer's need for a smaller and more efficient alternative to the standard-sized cars that were marketed by the domestic Big Three (General Motors, Ford, and Chrysler) at that time.

American Motors' designers gave the car a new grille and more open rear fender wells, giving the car a lighter appearance than that of the earlier car, which had hidden its rear wheels behind deeply skirted fenders. The original taillights were turned upside down, saving money on retooling. This design was originally mandated by Nash's Airflyte styling motif, which sought to reach for the blinding optimism of post-World War II transportation. The car's seemingly narrow 55-inch (1,397 mm) track was not much different from the industry standard, but rather an illusion fostered by the bulbous bodywork.

Romney worried about cannibalizing sales of his larger, more profitable senior Ramblers, so for 1958, the American was available only as a two-door sedan (senior Ramblers came only in a variety of 4-door body styles.) The only engine was a 195.6 cu in (3.2 L) flathead six producing 90 hp (67 kW; 91 PS). The American went on sale late January 1958, with a minimum of marketing and promotion. It was available in two trims, a base Deluxe model priced at US$1,789 allowing AMC to claim the lowest-priced car made in America (adjusted only for inflation, equal to US$14,624 in 2014 dollars) and as a Super trim version for $1,874 offering more "luxuries". The car was advertised as being the only small car with an automatic transmission. All Americans were completely dipped in rust proofing.

The automotive press was positive to the reintroduced model. Tom McCahill wrote in Mechanix Illustrated, "There isn't a better buy in the world today." He continued, "The Rambler American ... is an ideal-size small family car... It will give up to 30 miles on a gallon of gas (and more, with overdrive) and will outperform any imported sedan selling for under $2,000 except in the cornering department... It is by far the most rattle-and-squeak-free 1958 Detroit product I've driven-and I've driven them all!"

Reports by owners praised the car's economy of operation, but ranked at the top its ease of handling.A "workhorse" priced at under $2,000 "it doesn't look as though every penny was pinched out of it", but retains a "chic look". The American found 30,640 buyers during the abbreviated 1958 model year and helped Rambler become the only domestic make to post an increase in sales that year.

A two-door station wagon was added to the line in 1959. With the larger Rambler Six wagons offered only as four-door models, AMC's management thought there would be little sales cannibalization from the American. The Deluxe wagon was priced at $2,060, while the $2,145 Super version included a standard cargo-area mat and roof rack. A Deliveryman commercial wagon, with no rear seat and an extended cargo floor, was available, but found few takers. Self-adjusting brakes were added in 1959.

For the 1960 model year, the Rambler American line added a four-door sedan body style and a third trim level, a top-of-the line Custom. The new four-door rode on the same 100 in (2,540 mm) wheelbase as the other models and was meant to battle the newly introduced compacts from the Big Three, the Ford Falcon, Chevrolet Corvair, and Plymouth Valiant.

The new Custom model came standard with a new 195.6 cu in (3.2 L) overhead valve engine with a slightly higher compression ratio of 8.7:1 producing an additional 37 hp (28 kW; 38 PS), for a total output of 125 hp (93 kW; 127 PS), while the base models retained the flathead as the standard engine. The flathead six had no visible intake manifold since it was integrated within the cylinder head, while the exhaust manifold is a "log-type" that looks like a long tube. All models received an enlarged gas tank, now 22 US gal (83 L; 18 imp gal) capacity, while power steering was a new option.

Even in the face of the new competition from much larger automakers, the compact Rambler American enjoyed appeal not only because of its low initial price, economy and high gas mileage, but also because its resale values ranked among the highest. The suggested delivered price for the Deluxe 2-door sedan was $1,795, and it was advertised as the lowest priced car in America. Demand for the traditional American continued to grow as sales increased to 120,603 units (of which 44,817 were two-door sedans, 46,973 four-door sedans, and 28,813 station wagons), thus helping AMC reach 7.5 percent of the U.S. market with a total Rambler sales of 485,745 automobiles and third place among domestic brands. 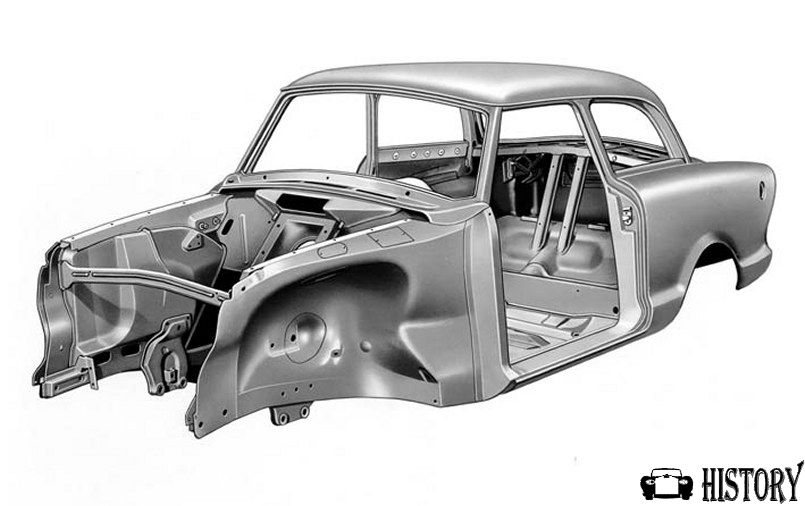 The Rambler American was introduced to the Mexican market in 1958 through direct importation from the US. Early in the year, American Motors signed an agreement with an assembly plant based in Monterrey, Nuevo León, that produced a number of vehicles for different makes and had its own dealership network. Virtually, the whole Rambler line was available. However, the production and sales volumes were fairly low and the agreement was terminated in late 1959. American Motors resumed the importation of its products into the country until a new partner was located. Early in 1960, the company signed a new agreement with Willys Mexicana S.A. de C.V. and the first model produced was none other than the Rambler American, becoming the first American Motors product made and sold by what would become Vehículos Automotores Mexicanos S.A.

The American was introduced as the North American economy was in a recession and buyers were looking for smaller and more economical cars and the Rambler brand was known as a fuel miser. The Rambler American was a yearly winner of the best fuel economy in the Mobil Economy Run and the Pure Oil Company Economy Trials, even during later years when fuel efficiency was not a major factor in the purchase of automobiles.

Rambler's emphasis on economy over performance can be observed through the example of automatic transmission use in a Rambler American where the 1959 owner's handbook describes leaving the gear selector in the D-2 position (1.47:1 gear ratio) blocks access to low gear (2.40 ratio) when starting out from a stop; therefore, given the car's 3.31 axle, this yields an initial 4.86:1 final drive ratio reducing crankshaft revolutions for maximum fuel economy.

In 1959, AMC and Sonotone Corporation announced work on a car to be powered by a "self-charging" battery. It was to have sintered plate nickel-cadmium batteries. During the 1960s, AMC partnered with Gulton Industries to develop a new battery based on lithium and to use an advanced speed controller designed by Victor Wouk. However, the actual running prototype was a 1969 Rambler American station wagon converted from 290 cu in (4.8 L) V8 to an all car electric using nickel–cadmium batteri Power consisted of 160 cells, each rated at 75 ampere-hours (Gulton KO-75), arranged in two banks of 80 cells each, and connected in parallel. The equipment Wouk designed "gave it good acceleration, but there was still a problem with the car's range." Later, AMC and Gulton developed the Amitron and the similar Electron city cars.