The Rolls-Royce Phantom III was the final large pre-war Rolls-Royce. Introduced in 1936, it replaced the Phantom II and it was the only V12 Rolls-Royce until the 1998 introduction of the Silver Seraph. 727 V12 Phantom III chassis were constructed from 1936 to 1939, and many have survived. Although chassis production ceased in 1939 (with one final chassis being built in 1940), cars were still being bodied and delivered in 1940 and 1941. The very last car, though completed in 1941, was not delivered to its owner until 1947.

The III is powered by an aluminium-alloy V12 engine of 447in³ (7.32L), having a bore of 3.25 inches (82.5 mm) and a stroke of 4.5 inches (114.3 mm). It is a pushrod engine with overhead valves operated by a single camshaft in the valley between the cylinder banks. Early cars had hydraulic tappets or, rather, a unique system of eccentric bushings in each individual rocker that was actuated by a small hydraulic piston; the eccentric bushing ensuring zero valve-lash at the rocker/valve interface. This system was changed to solid adjustable tappets in 1938. The Phantom III is unusual for its twin ignition systems, with two distributors, two coils and 24 spark plugs. Fuel is provided by a twin SU electric pump. Wire wheels are fitted as standard, but many cars carry Ace wheel discs.

The car features on-board jacking and a one-shot chassis lubrication system, operated by a lever inside the driver's compartment. Independent front suspension by a coil spring-based system is complemented by a carryover semi-elliptical spring unit in the rear. The car has a 4-speed manual transmission with synchromesh on gears 2, 3 and 4. Overdrive was added in 1938. The car has 4-wheel servo-assisted brakes applied by cable (using a servo made under licence from Hispano-Suiza). The radiator shell is of Staybrite steel.

Only the chassis and mechanical parts were made by Rolls-Royce. The body was made and fitted by a coachbuilder selected by the owner or a dealer who might have cars built for showroom stock. Some of the most famous coachbuilders who produced bodies for Rolls-Royce cars are Park Ward, Mulliner, Hooper and Thrupp & Maberly. Body types as well as limousines included saloons, coupés, and convertibles. A handful of used cars have been converted to hearses and shooting brakes.

In 1964, more than 20 years after the end of production, the villainous Auric Goldfinger (played by Gert Fröbe) drove an excellently preserved black and yellow Phantom III (Chassis Number #3BU168 Sedanca de Ville by Coachbuilder Barker), knowing that its great strength would be able to hold the weight of the vast amounts of gold that he smuggled around Europe. 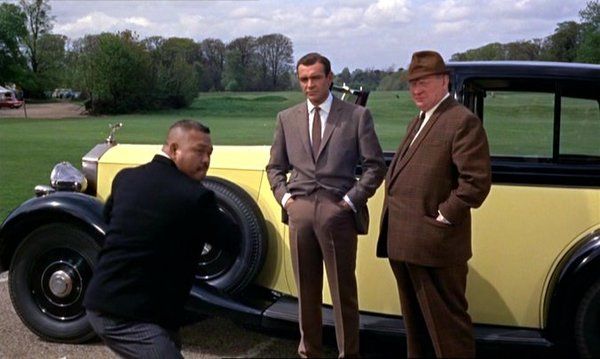 The Rolls-Royce Phantom III In Goldfinger