The Rolls-Royce Phantom II was the third and last of Rolls-Royce's 40/50 hp models, replacing the New Phantom in 1929. It used an improved version of the Phantom I engine in an all-new chassis. A "Continental" version, with a short wheelbase and stiffer springs, was offered.

The Phantom II used a refinement of the Phantom I's 7.7 L (7,668 cc or 467.9 cu in) pushrod-OHV straight-6 engine with a new crossflow cylinder head. Unlike on previous 40/50 hp models, the engine was bolted directly to the 4-speed manual transmission.Synchromesh was added on gears 3 and 4 in 1932 and on gear 2 in 1935. Power was transmitted to the rear wheels using an open driveshaft, a hypoid bevel final drive, and Hotchkiss drive, replacing of the torque tube from a remotely mounted gearbox used on earlier 40/50 hp models.

The chassis of the Phantom II was completely new. The front axle was mounted on semi-elliptical leaf springs as on earlier 40/50 hp models, but the rear axle was now also mounted on semi-elliptical springs instead of cantilever springs. This, along with the drivetrain changes, allowed the frame to be lower than before, improving the handling. The 4-wheel servo-assisted brakes from the Phantom I were continued, and the Bijur centralized lubrication system from the Springfield-built Phantom I was included on all Phantom II chassis.

A total of 1,281 Phantom II chassis of all types were built.

Royce had body designer Ivan Evernden build him a one-off short-wheelbase Phantom. Designated 26EX, the car had a tuned engine,five-leaf springs that were stiffer than standard and a Barker four-seat lightweight close-coupled saloon body painted with an artificial pearl lacquer made from ground herring scales. The sales department initially showed no interest in 26EX but, when Evernden returned to the office from the 1930 Biarritz Grand Concours d'Elegance, where 26EX had won the Grand Prix d'Honneur, he found that the sales department had already announced the new "Phantom II Continental Saloon", prepared a brochure for it, and costed it.

According to Evernden, neither he, Royce, nor the Rolls-Royce sales department had written specifications for the "Continental" model, although he and Royce had a clear specification in mind. Based on Evernden's writings and examination of company records, historian Ray Gentile determined that the common specifications of the Continental chassis were the short wheelbase and stiffer, five-leaf springs. By this definition, two hundred and eighty-one Continental Phantom II's were produced, including 125 left-hand drive versions. 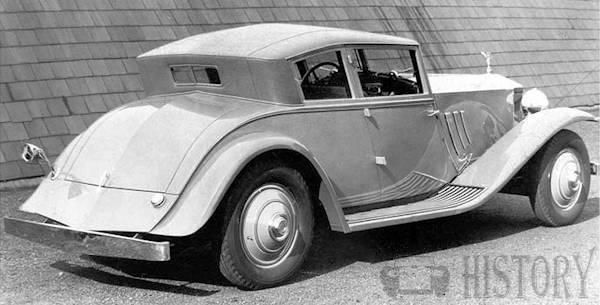 Only the chassis and mechanical parts were made by Rolls-Royce. The body was made and fitted by a coachbuilder selected by the owner. Some of the most famous coachbuilders who produced bodies for Rolls Royce cars are Park Ward, Thrupp & Maberly, Mulliner, Henley, and Hooper.

The Phantom II was featured in the films The Sorcerer's Apprentice (2010 film) and Indiana Jones and the Last Crusade. When its specifications are quoted during the scene in the Kingdom of Hatay, the Sultan states that the Rolls-Royce Phantom II has a "4.3 litre, 30 horsepower, six cylinder engine, with Stromberg downdraft carburetor" and "can go from zero to 100 kilometers an hour in 12.5 seconds (and I even like the color)." However, the car used in the film was actually a Rolls-Royce Barker Saloon, with 20/25 hp. It is also the star of the 1964 movie The Yellow Rolls-Royce where its engine specifications are given as the engine having a bore of 4.5" and stroke of 5.5", which would equate to 525 cubic inches

A  Rolls-Royce Phantom II, in Indiana Jones and the Last Crusade film from 1989