The Jaguar XJ (X300) is a luxury saloon manufactured by Jaguar Cars between 1994 and 1997. It was the first XJ produced entirely under Ford ownership, and can be considered an evolution of the outgoing XJ40 generation. Like all previous XJ generations, it features the Jaguar independent rear suspension arrangement. The design of the X300 placed emphasis on improved build quality, improved reliability, and a return to traditional Jaguar styling elements.

At the car's launch in 1994, Jaguar marketing material made use of the phrase "New Series XJ" when describing the X300 models.

Aesthetically, the X300 received several updates in the design refresh led by Geoff Lawson in 1991(penned). The mostly flat bonnet of the XJ40 was replaced with a fluted, curvaceous design that accentuated the four separate round headlamps. Rear wings were reshaped to accommodate the new wrap-around rear light clusters. Also, the separate black-rubber bumper bar of the XJ40 is gone and replaced with a fully integrated body-coloured bumper.

The Jaguar "leaper" hood mascot was installed only on cars for non-European markets.

The interior of the X300 was similar to that found in the XJ40, with some revisions. The seats were updated to have a more rounded profile, wood trim was updated with beveled edges, and the steering wheel was redesigned.

Early X300 cars were built without a front passenger glove-box, due to space constraints caused by the introduction of a front-passenger airbag.

Jaguar's V12 engine and AJ6 inline-six engine were both available in various X300 models, although they received significant updates. Both engines were fitted with distributorless electronic engine management systems.

The V12's new management system was designed by Nippon Denso. The top aluminium cover in the engine's valley was redesigned to house two packs of three coils each, with each coil having two high-tension terminals for a total of twelve. These coilpacks were driven by two Denso ignition modules, which are very similar to Ford EDIS-6 units. The crankshaft in the V12 was switched from a forging to a chill casting. A visibly significant chromed pipe connecting the left and the right banks of the V12 in the XJ40 platform (intended to vent and route the crankcase blow-by gas to the intake plenum) was changed with the introduction of the X300 to an almost invisible design at the top center of the engine underneath a plastic cover that also hides fuel rails and coilpacks.

The AJ6 changed to use magnesium-alloy valve covers and revised pistons, and was given the new designation "AJ16". It was found in 4.0 L supercharged form in the XJR.

The normally aspirated six-cylinder X300 cars used either a ZF four-speed automatic gearbox (4HP-22 on the 3.2 L and 4HP-24 on the 4.0 L), or a Getrag 290 five-speed manual. The 4HP-22 automatic is mechanically controlled while the 4HP-24 is electronically controlled, allowing 4.0-litre models to offer 'normal' and 'sport' modes on a switch by the gear lever. This switch is replaced with a blanking plate on the 3.2 L. The supercharged six-cylinder in the XJR was normally built with the optional GM 4L80-E four-speed automatic and very few XJRs were ordered with the standard specification Getrag 290. All V12-equipped cars were built with the GM 4L80-E automatic. In certain markets, such as North America, no manual gearbox was offered. 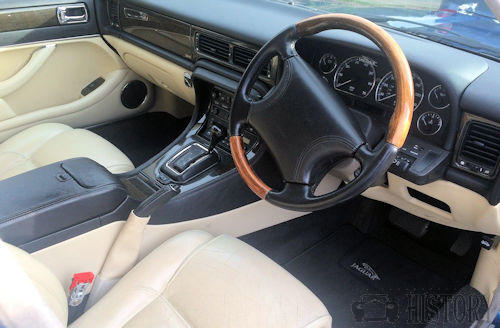 The X300 was latterly available in both short- and long-wheelbase body styles and in various trim levels. Some markets had a limited selection of X300 models or features. For example, the North American XJ6 was only available with the 4.0 L engine, and all cars sold there were equipped with alloy wheels, a leather interior, and air conditioning. North America did not receive the Sovereign, Sport, Executive, or Century models, nor was a manual transmission offered.

Power folding mirrors were standard in Japan and optional in all other markets except the USA.

The Sovereign model also used the AJ16 engine (in either 3.2 L or 4.0 L form), and came equipped with luxury features as standard such as ten-way electric leather seats with three-way memory on the driver's side, cruise control, automatic climate control and a tool kit located under the bonnet. The exterior of the Sovereign was adorned with chromed trim in various locations: on the radiator grille, rear light cluster surrounds, windscreen and rear window surrounds, rain gutters, window frames, and boot-lid plinth.

To attract younger buyers, Jaguar offered a "Sport" model with wider 8-inch wheels, revised seats, and stiffer suspension. The Sport kept the matte-black window surrounds from the base model, and is identified by "Sport" badges on the B-pillars and "XJ Sport" badging on the rear. The sports suspension (along with the wider wheels) were also available as an option on both SWB and LWB XJ6 and Sovereign models.

Aimed at a younger market segment, the Executive model was introduced for the 1997 model year and featured leather trim, a wood/leather steering wheel, wide wheels (similar to the "Sport" model), and air conditioning. It was treated as a run-out specification for the XJ6 and so separate production numbers are not available.

Part way through the 1995 model year, a long wheel base version of the body shell was introduced, adding an extra 6 inches (150 mm) for rear seat occupants and an extra inch of headroom. This body style was available for all of the "classic" models (XJ, Sovereign, XJ12) but not the "sport" models (XJ Sport, XJR). There were two X330 variants, one with five seats and one with four, which featured a raised centre console between the two adjustable rear seats. Internally, Jaguar referred to the long wheel base version as the X330 Majestic, although unlike the XJ40 they were never badged as such. The X330 bodies were built on the standard production line, whereas the XJ40 Majestic started as a SWB body which was then taken away and stretched by Project Aerospace in Coventry, before being returned and fitted out by Jaguar Special Vehicle Operations. This meant the X330 carried a much smaller price premium over the standard models, as compared to its predecessor.

This mid-1995 model change also includes a revision in the rear suspension that allowed adjustment of toe-in.

The XJR was introduced as a high-performance sport model, and it was Jaguar's first-ever supercharged road car (and only the second Jaguar road car to use forced induction, after the turbocharged Jaguar XJ220.) The output of the six-cylinder AJ16 engine was increased to 326 bhp (243 kW; 331 PS) and 378 lb·ft (512 N·m) with the use of an Eaton M90 supercharger and an air-water intercooler. The 0 to 60 mph (0 to 97 km/h) time was generally around the 5.7 to 6.4 second mark. The XJR was fitted with wider wheels than the Sport model, and firmer suspension. Although the manual gearbox was standard, almost all XJRs were built with the optional automatic gearbox.

This generation of the XJR model carries the code name "X306". It is also sometimes referred to as the "XJR6" to differentiate it from the later V8-engined X308 XJR. 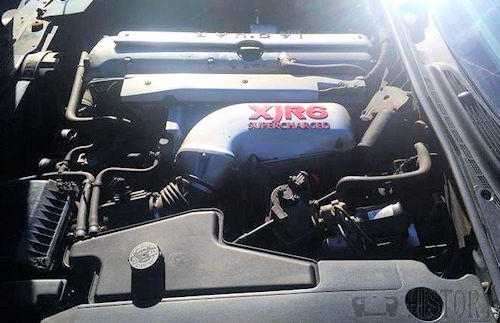 The XJ12 model (which carries the code name "X305") featured the same trim level of the Sovereign, but was powered by the 6.0 L version of the Jaguar V12 engine. It is visually differentiated by the rear boot-lid "XJ12" badge, a "V12" badge on the passenger-side dashboard wood trim, a "V12" badge on each B-pillar, and a gold-colored Jaguar crest at the top of the radiator grille surround.

The X305 was equipped with an on-board diagnostics system; however, the system failed to fully meet the OBD-II specifications, which became mandatory for the 1996 model year in the U.S.With a special dispensation for that model year expired, no 1997 model year X305 models were sold in North America.

The last Jaguar to be powered by a V12 engine was a black XJ12 which left the production line on April 17, 1997. It used to reside in the Jaguar Daimler Heritage Trust museum in Coventry,before its closure and move to the Heritage Motor Centre in Warwickshire.

The "Daimler" name was applied to the highest trim level of the X300 cars, and featured all the chrome brightwork found on the Sovereign cars, plus chromed doors mirrors, chromed door handles, and a fluted radiator grille surround. The Daimler Six model was equipped with the AJ16 engine, and the Daimler Double Six with the V12.

In some markets (such as North America), the "Vanden Plas" model name was used instead of "Daimler". Vanden Plas X300 cars in the United States are all built on the long-wheelbase body shell, although they were only available with the six-cylinder engine (leaving the V12 available solely in the XJ12 model for that market.)

In 1996, the Century model was introduced to commemorate the centennial of the Daimler name. The Century was equipped with all features and upgrades available on the X300 cars, plus chromed wheels, special exterior paint, and electrically adjustable rear seats.

A single two-door XJ convertible was built in 1996 to commemorate Daimler's centenary. The concept car, called the Daimler Corsica, was based on the Daimler Double-Six saloon and can seat four. The prototype, which lacked an engine, had all the luxury features of an XJ saloon, but a shorter wheelbase. It is painted in a colour called "Seafrost", which was later discontinued. The Daimler Corsica was named after the 1931 Daimler Double-Six Corsica. The concept was a one-off, and may have been intended for limited production beginning in 1997. The car has made a limited number of appearances at car shows and events since 1996. It has most recently appeared at the Belfast Sports Car Show in January 2004. The Daimler Corsica prototype is owned by the Jaguar Daimler Heritage Trust, who have commissioned it to operate as a fully functional road-legal car. It has been on display at their museum at Browns Lane in Coventry. The car has also been displayed at Harewood House as part of the Jaguar Enthusiasts' Club show. 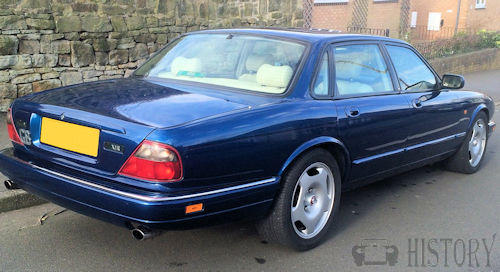