The ZAZ 965 Zaporozhets and its successor ZAZ-965A "Zaporozhets" are small cars of the Soviet, now Ukrainian, manufacturer Zaporisky Awtomobilebudiwny Zawod (ZAZ) from Zaporizhia, which were produced from 1960 to 1969.

In the autumn of 1956, it was decided to develop a small car for mass production. The development department of the Moskvich presented in October 1957 before the prototype MZMA-444. The body of the test vehicle already looked similar to that of the later serial production ZAZ-965. The under-dimensioning and unreliability of the originally used MD-65 air-cooled engine of the Irbit motorcycle factory with 650 cc capacity and 17.5 bhp delayed the introduction. By 1959, followed by three more prototypes with a developed by NAMI air-cooled two-cylinder engine with 649 cc and 18 hp. At the World's Fair in Brussels in 1958, advertising brochures were already distributed by this prototype.

In 1959 it was decided to entrust the further development and serial production of the small car to the Kommunar plant in Zaporizhzhia, which was originally specialized in the production of agricultural machinery. The developers rejected the two-cylinder engine and designed an air-cooled four-cylinder engine. However, had more technical modifications to be made. Instead of the planned 12-inch wheels was due to the numerous unpaved roads in the Soviet Union on 13-inch wheels used. This also necessitated changes in the construction of the wheel suspension with introduction of independent suspension on all four wheels and changes to the wheel arches the tyres now 5.20 x 13 with a fuel tank capacity of  6.6 imp gal, (7.9 US) and a carrying capacity space of 706 1b, 320 kg. 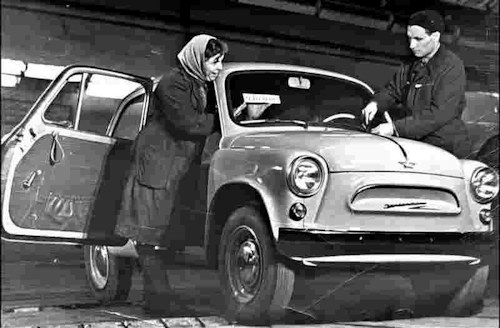 The body is self-supporting. The front part up to the B-pillar is very similar to the built in 1955 Fiat 600 and has - like this - even rear-hinged doors (suicide doors). and technology are very different from the Italian model. Because of its unusual shape, the car got the nickname "the hunchback”. Zaporozhets was destined to become a "people's car" of the Soviet Union. At first the ZAZ-965 had some serious flaws: the car was prone to oversteer and the heater was not designed for the low temperatures in winter.

On June 18, 1959, the new compact car was presented for the first time in approximately the same shape as it was later produced. The vehicle was initially called Kommunar.  On November 22, 1960, this was as the Zaporoshez 965 in the series. At the Leipzig Fair, it was first shown in 1961, where it was stated openly that it was in the body is not a real in-house development. Compared to the Fiat 600 D, however, the larger space was highlighted in the passenger compartment. This was made possible by a different design and a rear in comparison with the prototype space-saving, mounted in the rear air-cooled V4 engine with a 90 ° bank angle, and 746 cc in order to achieve a uniform ignition distance, the crankshaft was quadruple cranked (firing order 1-3-4-2). The partially made of aluminium engine produces 23 hp (17 kW) at 4000 / min. The drive unit was developed by NAMI. 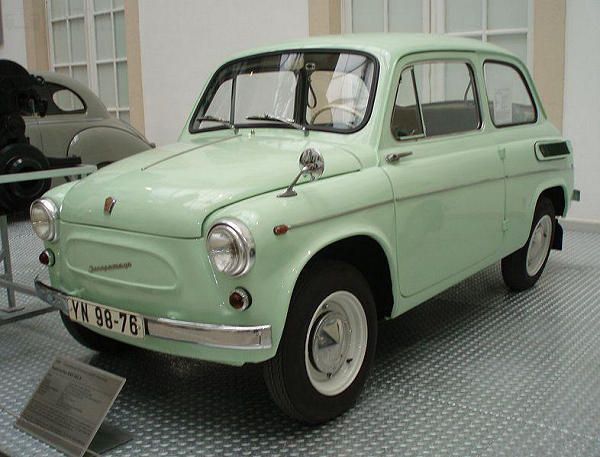 The four-speed gearbox was in front of the rear axle. All wheels were suspended individually, the rear wheels on pendulum half-axles, the front of the crankshaft. The small car accelerated to 60 km / h in 17 s and reached a top speed of 80 km / h. The fuel consumption was given as 6.5 litres per 100 km. In the first year, the car was still manufactured in Manufacturability, until the end of 1961.In total, 322,106 units of the 965 were produced. 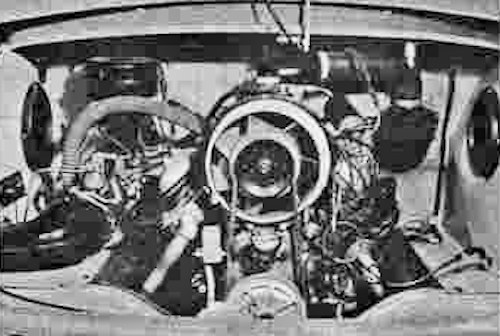 From 1962, special vehicles were produced by this model, such as a right-hand drive for the post office with a letter tray instead of the back seat. In 1963, a wheelchair accessible vehicle called the 965B was launched with an electromagnetic clutch. In 1966, the power was increased at constant displacement to 30 hp (22 kW) at 4000-4200 / min. This allowed a top speed of 100 km / h.

From 1965 the model SAS-965A was exported to various countries of the Eastern Bloc, but also to Belgium and Austria. This was named Yalta. As early as 1966 appeared as a successor to the Zaporoshez 966 W with the engine of the SAS-965A, but a more modern body. 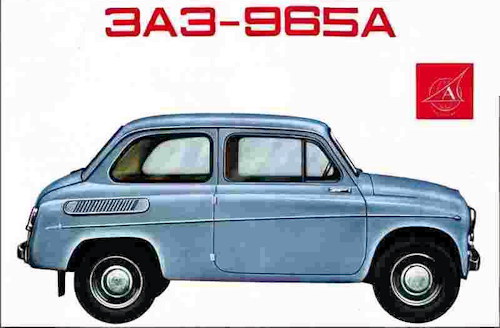