Initially, the company was best known for its locally built versions of the Fiat 128 and Fiat 600.

During the 1970s and 1980s, Zastava sold its compact cars in North and South America and Western Europe under the "Yugo" brand. Its final model, the Yugo Sana, was styled by Italian designer Giorgetto Giugiaro and launched in 1990, but its production was cut short by the Yugoslav wars. By the same time Yugo brand had disappeared from most Western markets by 1993. In 1999, the factory was damaged by NATO bombing during the Kosovo War.

The post-Yugoslav era has been difficult for Zastava, just as most of the other major companies based in Serbia, which suffered from hyperinflation, international sanctions, and economic mismanagement. As result, the production almost stopped and the company failed to introduce new models for long time.

In September 2005, the company signed a new agreement with Fiat to produce a version of the 2003 model Fiat Punto for the Balkans under the name Zastava 10, with a capacity of 16,000 units yearly.

In December 2007, Serbia announced that Zastava would be privatized in April 2008.

The roots of Zastava lay in the 1851 founding in Kragujevac of the Vojno-Tehnicki Zavod (Army Technical Institute). The institute developed a cannon foundry division in 1853, becoming a military vocational school in March 1854. During the 1880s, Zastava also begin with the production of firearms. At the end of the 19th century the cannon foundry changed its name to the Military Engineering Works. The firm rapidly expanded its production program and the complexity and quality of its products.

In 1904, within the company, a section dedicated to automobiles is inaugurated. Beside repair services, certain car parts are also manufactured. In 1939 it begins assembling Chevrolet military trucks. The production came to a halt in 1941 with the Axis invasion of Yugoslavia and by then, 400 trucks came out of the factory which consisted of a working force of 12,000 men.

Fiat 1400 was Zastava's first assembled automobile, but Fića Zastava's licence built version of Fiat 600 is its iconic historical brand. 923487 of Zastava 750 were produced ower span of 30 years,with several different engines and in various equipment levels, from October 18, 1955 through November 18, 1985. 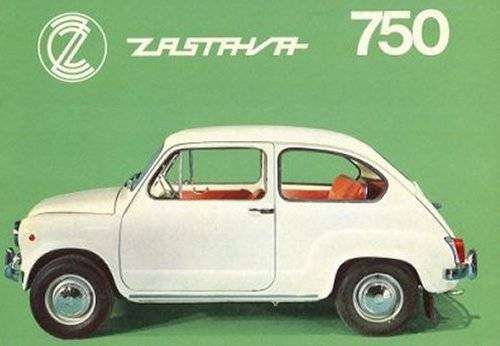 The floorpan of the 1300/ 1500 was used as the basis for the Polski-Fiat 125p, which was produced by Polish FSO from Zastava CKD kits. The 125p was created by mating the body of the Fiat 125 to the mechanicals (engines, gearbox, transmission and suspension) of the 1300 and 1500. On the Yugoslav market, the 125p was known as the Zastava 125PZ.

1965 marked the official beginning of Zastava exports, with 6,000 cars sent to Poland.

Zastava in this decade signed a new contract expanding production and technological cooperation with Fiat. A $10 million investment pushed annual capacity to 85,000, with plans in place to reach 130,000 units within a five-year period.

In 1969, the Zastava Kamioni (Zastava Trucks) division split from Zastava Automobili and began producing Italy's Om trucks, rated for between 2.5 and 4 tons. Today, Zastava Kamioni continues to make trucks through a partnership with Iveco.

In 1970, Zastava rolled out the 750M, fitted with a new 767 cc engine boasting a thermostat-controlled pressurised cooling system.

In the beginning of the seventies Zastava made arrangement with Fiat to produce Zastava 101 (4cyl, 1116 cc OHC, 55 hp, front wheel drive), which was based on Fiat 128. It had restyled rear panel and resembled a hatchback body style. This 3 and 5 door variant of Fiat 128 was specific to Zastava and was never released elsewhere by Fiat.

It was said that model 101 should be produced in Yugoslavia for both Yugoslav and Italian market, and vice versa, in the Italian market would have been sold under the marque Innocenti. It was soon nicknamed Stojadin as a pun on sto jedan (101) (Stojadin is a male name, although folk etymology also associates it with sto jada, "a hundred woes", due to the poor performance and assembling). In spite of this negative record, the car was a good seller in the domestic market as there was a virtual monopoly. Yugoslavs used to buy it because of its moderate price, simple mechanics, cheap spare parts and low maintenance cost compared to other cars assembled in Yugoslavia.

In 1979, Zastava 750S – (Special) was released which offered updated interior controls and switches, a new steering wheel and a sportier 22 kW engine which raised the car's top speed to 120 kilometres per hour (75 mph).

In 1980, the Zastava 850 was launched, with a 23.4 kW 848 cc engine propelling it to 125 km/h and a fully synchronized transaxle. Production of the 750 and 850 continued through 1985 in L, LE and SC versions until, finally, the tools were sold to the Tofaş factory in Turkey. Tofaş continued to produce these cars under Zastava license into the '90s.

In the mid-seventies, Zastava management decided to develop a new model, still based on the same Fiat engine. It was originally to be known as Zastava 102, but the name was dropped in 1981 and the car released as Yugo 45. It was styled by Zastava with some help from Fiat engineers. It was an updated body version of Fiat 127 with some elements of Fiat 128 and it followed the style of the Autobianchi A112 but with a more square appearance. Several variants were made, with 903 cc, 1116 cc, and 1301 cc engines.

Later in the eighties, Yugo was exported to USA and at the same time it went through several modifications, most importantly the adoption of a 5-speed gearbox. In the same decade, Zastava changed its branding name to Yugo and derivative models were renamed: original Zastava Yugo to Koral and Zastava 101/128 to Skala. The original numerical classification would remain unchanged for some export markets, as it was the case for the United Kingdom.

These were Zastava's best years in number of cars assembled, around 230,000 cars a year. Zastava cars were to be sold in 70 countries at the time, with 27,000 exported to Western markets. The factory also started to make trucks, under IVECO licence.

In 1988 a new model was released called the Zastava Florida (known as Yugo Sana or Yugo Sana Miami, in some countries). Its exterior was designed by Giorgetto Giugiaro, with a body shape similar to a Fiat Tipo (1988) or Citroën ZX (1991).

In the early 1990s, Zastava was affected greatly by the Balkan Crisis. The factory production became unstable because of a problem with supplies. Exports were impossible during those years, because of trade sanctions imposed on Yugoslavia. As a result, its cars disappeared from most foreign markets after 1992.

In 1999, during the Kosovo War, NATO bombed the factory in Kragujevac, Serbia because Zastava Arms was a major military supplier to the Serb government. Some of the car manufacturing buildings were damaged and numerous workers were injured.

After the war, there were trade talks with Hungarian firms to assemble Yugos in Hungary, but no agreement was reached because of the Yugoslavian partner's hesitation. However, Zastava Trucks are assembled in Hungary, near Pécs, with IVECO engines.

Yugos were face-lifted and new versions are introduced in the Belgrade International Motor Show in 2002. The new Yugo Koral IN had a 1,3l 80HP motor with BOSCH electronic injection, the transmission designed by Porsche, slightly new internal and external design, improved safety, and lots of extra details which were missing from former models.

The new generation of Yugo was granted a FIA certificate, so it was in compliance with European standards.

In October 2000, Vojislav Koštunica became the new president of Yugoslavia (also a Yugo Koral owner) and soon after the sanctions against the country were lifted the export resumed. The production had fallen to a mere 9 percent of its pre-1990 230,000 vehicles annual capacity, with exports to around 4000 vehicles. The new Yugoslav government a $50 million reorganization effort in cooperation with the World Bank, which resulted in mass layoffs, and its intention to privatize the company.

A new prototype for the Yugo Florida, known as Florida 2.0, was made, equipped with the same engine as in Fiat Bravo 2.0.

The Zastava 10, based on the Italian Fiat Punto Mark 2b, is currently Zastava's most modern car.

Optional features include dual front airbags and air conditioning, as well as power windows. Although the Zastava 10 is Zastava's newest and best model, it faces fierce competition in its home market against cars like the Volkswagen Polo. However, it has some advantages over many of its rivals, including price. As of December 2007, prices of the Zastava 10 start from Euro 7,550 in the Serbian market. In March 2007, the Zastava 10's share of the Serbian car market was 11% and the company started exporting cars to former Yugoslav republics in the first half of 2007 and, with plans to add to Bulgaria and Albania as well.

Production of all Zastava cars (Yugo, Skala 101 and Florida) has ended on or before November 20, 2008. After that day only car in production will be Zastava 10 which will change name to Punto.

CEO of Zastava cars Zoran Radojević has declared that the company has received offers from African countries for technology transfer. It is believed that Congo is interested in starting production of the Zastava Florida and Egypt of the Zastava 128.

In 2002, the American entrepreneur Malcolm Bricklin, who had previously imported Yugo into the United States, signed a deal with Zastava to reintroduce the company's products into America Bricklin's intention was to sell the cars for less than $10,000 under the brand name ZMW (as in Zastava Motor Works) which in the United States would be pronounced Zee-M-W. Even though a website proclaiming the brand's arrival was produced by Bricklin's company, by 2006 his intentions had switched to importing products from Chinese car maker Chery instead.

In October 2005, an agreement with Fiat was reached for production of the Fiat Punto by Zastava for Eastern European markets, which would be commercialed as the Zastava 10. The Koral IN L, with a fuel injected 1.1 L Peugeot engine, met the European Union safety standards in a test supervised by the German Technischer Überwachungsverein (Technical Monitoring Association). This may pave the way for export to EU countries.

In addition to the Zastava 10, Zastava is currently negotiating with Fiat for the production rights to another model not yet in production, a C-segment sedan, codenamed Project D200, to be manufactured for Fiat by Zastava and/or Tofaş of Turkey. It will compete with the Dacia Logan. 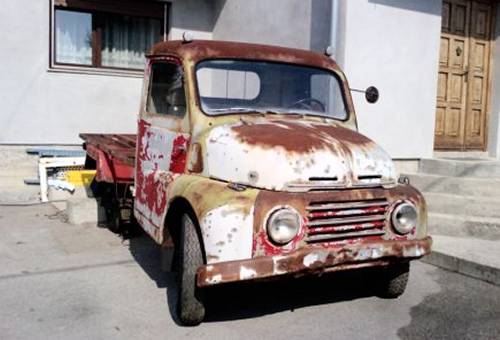