Zastava Skala, also known as Yugo Skala, is a generic name for a family of cars built by Serbian manufacturer Zastava Automobili. Based on a Fiat 128 sedan, it was introduced in 1971 and sold as Zastava (Yugo) 128 with a restyled rear panel. Later it became available as a 3 or 5-door liftback, a style that had not been issued in Italy, under the name Zastava 101.

Zastava 101 is widely known by its nickname "Stojadin" (a male name, from the similarity with Serbo-Croatian for 101, "sto jedan").

In the final years of production, the Zastava Skala was available in a single trim level: the 55-horsepower, 1.1-liter, 5-door Skala 55. In 2008, a new Skala could be purchased for just under 4,000 euros, undercutting the Zastava Koral (an ameliorated Yugo).

Production of the Zastava Skala continued for some time after the discontinuation of the Zastava 128. The Skala features a fifth door, making it impressively functional at this price level. Drop the rear seat and cargo space increases from 325 to 1,010 liters.

Due to its practicality and robustness, and thanks in no small part to its low price, the Skala 55 continued to sell well in Serbia until the end of production in 2008. 1.273.532 have been built since 1971.

Zastava in late 2007 estimated that the Skala 55 was the world's second most-affordable car at the time.

Visitors to Zastava's or Yugo stand at the 2008 Belgrade Car Show in Belgrade, March 13 through 19th, might be forgiven a double-take or two. Tucked behind the Zastava Koral and Zastava 10, and the new Florida TDC diesel, was the Skala 55.

Few might remember when this popular entry-level workhorse last saw the bright lights of an exhibition stand.

Several improvements had been made to the event's most affordable car, courtesy Zastava R&D.

Under the hood, a new aluminum radiator had been installed. Underneath, wheel bearings and CV joints were now shared with the Zastava 10.

Behind the wheel was a new instrument cluster, complete with tachometer, glowing in blue and red nuances behind its curvaceous housing. New, softer seats made for an elevated driving position.

The 2008 Yugo Skala 55 also shares a horn; adjustable side mirrors, and rear-view mirror with the Zastava 10. Door locks come from Zastava's In (Zastava Koral and Zastava Florida) range. Owners now need but a single key to unlock the doors and liftback, and to operate the ignition.

Optionally, the 101 Yugo Skala 55 can be equipped to run on natural gas, with a factory-installed Lovato 40-liter tank and feed.

Arriving a full three years before Fiat's own 128 3P and Volkswagen's Golf, the 101 was among the very first hatchbacks with engine and gearbox located astride each other.

Front-wheel-drive in an era when most manufacturers were still years away from making the switch, the Zastava YUGO offered excellent space utilization. Independent rear suspension coped well with challenging Eastern European roads, while engines designed by the legendary Aurelio Lampredi worked best at heady rpms.

In 1973, the Zastava YUGO 101 won its class in the 17th international Tour d'Europe rally. The following year, Yugoslav driver J. Palikovic was reportedly piloting his 101 faster than his Porsche competition over several stages.

In February 1975, Zastava (YUGO) organized an expedition from its hometown of Kragujevac to Kilimanjaro. Five brand-new, standard Zastava 101 cars and 11 crew members travelled African deserts and savanna, finishing their 45-day expedition on the top of Kilimanjaro. Zastava consequently markets the car as Vozilo uspeha (roughly translated, vehicle of success).

In Poland, the FSO factory produced the Zastava 101 through 1976.

The early '80s sees the 101 become quite popular in the United Kingdom. Advertised under the slogan Go New! Go Yugo!, the 311/ 313/ 511/ 513 is the cheapest new car available to British buyers. In 1984, the range's entry-level model costs less than £2,400, roughly half the price of the equivalent Ford Escort. In order to avoid rust caused by road gritting, hard PVC coating was used throughout the underside, sills and valances.

In 1991, the millionth Zastava (YUGO) Skala was produced. 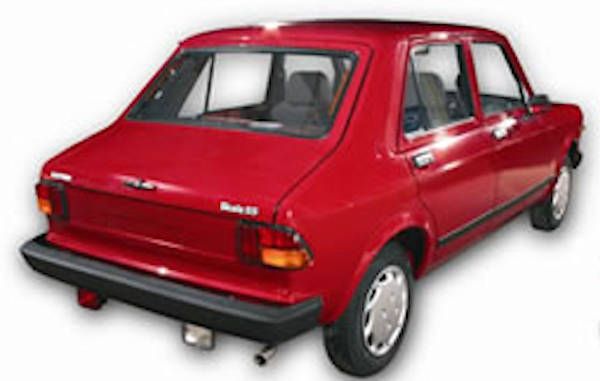 In the beginning, two versions of the Zastava 101 were available: Standard and De Luxe. Standard models offered seats trimmed in imitation black leather, with a black, spherical gear shifter. De Luxe trim brought forth red seats and carpet, chrome trim across the interior door panels and exterior sides of the car, and imitation wood ahead of the front passenger. Zastava's logo was embedded within a transparent shifter knob.

No further significant changes were made until 1979, when the Zastava 101B replaced the Standard model. Both the 101B and 101L now shared the same, upmarket seats, with integrated headrests.

Later in the year came the Special, with complete instrumentation including oil-pressure gauge and tachometer, and the most powerful engine ever installed in this car: a 73 horsepower (54 kW) version of the 1,290 cc motor, with Weber 32/32 DMTR 90/250 carburetor and 4-2-1 exhaust.

All 1979 Zastava 101s had a new steering wheel, with either Zastava or the company logo (101S/ 101SC) inscribed on the center horn button.

In 1983, Zastava launches the 101 GT/GTL 55/65. New, wider chrome bumpers boast integrated parking and indicator lights. A new radiator mask debuts, along with new side skirts and a new wheel design. The interior is redesigned, with a new dashboard, steering wheel, gear shifter and hand brake. The suspension is softer, while the car now sits lower, for better stability. The GTL model features revisions to the brakes.

In 1987, Zastava applies the YUGO name to the cars, in honor of its success in the United States. The pair is now called the YUGO 1.1 and 1.3 GX. A Y insignia is used instead of Z. More interior colors debut. All models now use 4-2-1 exhaust systems.

In 1988, the name is changed again, to YUGO Skala 55 and YUGO Skala 65. The butterfly-type front side windows are removed, while new plastic bumpers - much larger than those of old - debut. The interiors are redesigned again, finished in grey or Sahara yellow. A Bosch ignition system is installed. The Skala 65 uses a new two-barrel Weber 7Y2M-RA carburetor with an electronic choke, atop its 1,301 cc engine mated to a 5-speed gearbox.

These two models are produced until 1994, when suspensions and gear-boxes are modified and names are revised to Skala 55C and Skala 65C.

For the 2008 model year, several revisions have debuted (described above). The Zastava Skala 55 (101) remains something of a legend in Serbia: a solid, inexpensive car which can still be seen in all its generations, across the ex-Yugoslavia and Eastern Europe. 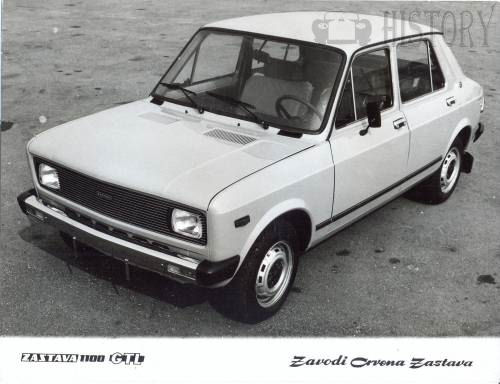