The Willys Eight was an American car, the Willys Overland in Toledo (Ohio) ,it was brought out in 1931 . This was derived from Willy's Six .

The car had a front longitudinally mounted eight-cylinder in-line engine with 80 bhp (65 kW) power. This engine was supplied by Continental . The wheelbase of the vehicle was 3048 mm and its price was between 995 US $ and 1395 US $.

Until 1933 the Eight was offered in different versions. This year, the company went bankrupt, but production continued. Along with the Willys-Knight and the Willys Six , the Eight was discontinued in favor of the smaller Willys 77 with four-cylinder engine. 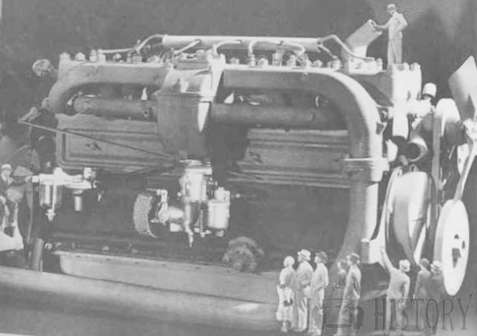 Model year 1931:The Eight appeared in two different versions: From the series 8-80D there was a Victoria coupe and a sedan, both in normal and luxury execution . In addition, there was another $ 200 more expensive custom version of the sedan. The series 8-80 also had to offer a coupe and a sedan, of which there was a normal and a luxury version. These better-equipped models were $ 250-300 more expensive than the equivalent 8-80D models.

Model year 1933 :The series 8-88A took over the wheelbase and mechanics of the previous model, but had new streamlined bodies to offer: grille and windshield were tilted backwards, the headlights had tapered to the rear housing and the spare wheels had disappeared from the vehicle sides. There was a coupe and a sedan, both in normal and custom design. Prices were $ 955 to $ 1155.