The Willys 77 was an American car , from Willys-Overland in Toledo (Ohio) , first brought out in 1933. Basically, the vehicle was an evolution of the Whippet . Willys-Overland had to file for bankruptcy in the same year, but production continued.

The car had a front longitudinally mounted four-cylinder in-line engine with 2388 cc and 48 bhp (35 kW) power. The wheelbase was just 2540mm and the car was offered for under $ 500, making it the cheapest American car of its time. Also, the operation was quite cheap, since the car only 9.4 ltr. Gasoline consumed to 100 km.

In the years until the entry of the United States in the Second World War , the model series under the name Willys 37 , Willys 38 , Willys 48 , Willys Speedway and Willys Americar was further developed. When civilian car production in the USA had to be discontinued in 1942, this vehicle also disappeared from the market. 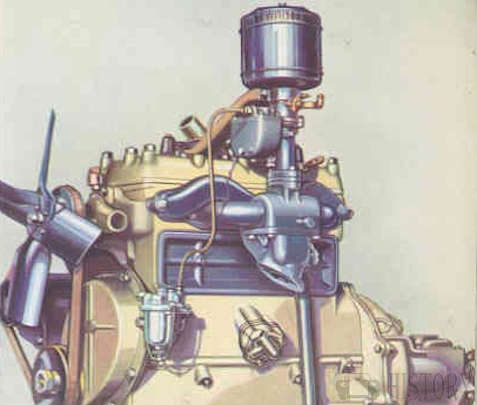 Model year 1933: From the first series there was a 2- and a 4-seater coupe with 2 doors and a 4-door sedan. Of all three models, more well-equipped versions with the suffix "Custom" were delivered, which cost around 20, - US $ more than the basic models.

Model year 1934 :In the following year, the model range remained unchanged; only a pickup was added. The prices increased but about 100, - US $. From the four elongated air intakes on the sides of the hood were five short and the split grille showed instead of the longitudinal bars a grid. The 77 was now the only model of Willys-Overland. In the same year the Ford Model B is discontinued. The Willys 77 and the Plymouth Model U are thus the last American 4-cylinder mass-produced cars before the Second World War.

Model year 1935 :In 1935 there was the Willys 77 only as a coupe and sedan; all other constructions fell away. In the same year the Plymouth Model U is discontinued. The Willys 77 is from there the last American four-cylinder mass-produced car until the Willys Jeep appears. If you do not regard the Jeep as a real car, the next American four-cylinder production car is the 1946s Crosley CC. 1954 then appeared in the United Kingdom built Nash Metropolitan.

Model year 1937 :For the model year 1937, the car was stylistically revised. A forward-looking alligator bonnet with horizontal grille bars in body color and the headlights recessed in the bulky front fenders gave the model a more modern look. It was renamed Willys 37 , but the technique remained the same. Also from the coupe, there was now a luxury version.

Model year 1938:The Willys 38 was now a rocket-shaped radiator emblem and there were new models in standard and luxury version.

Model year 1939 :The unchanged in itself car was now Willys 48 and in addition to the "DeLuxe" models, there were also "Speedway" versions (only 2-door). For a short time, the vehicles were also sold under the traditional name Overland .

Model year 1940:The following year was another stylistic revision: The alligator bonnet was now flatter and no longer had a grille; this was now below the hood and had horizontal bars in body color. The model was now called Willy's Speedway and its wheelbase was now 2,591 mm. In addition to the 2-door coupe and the 4-door sedan in basic and deluxe equipment, there was for the first time a station wagon in DeLuxe design.

Model year 1941:The Willys Speedway was renamed Willys Americar this year ; Speedway was just a name for the structure. Add to that the more expensive "Plainsman" versions. Stylistically, the cars remained unchanged, but got stronger engines with 63 bhp (46 kW) and the wheelbase grew to 2642 mm.

Model year 1942:In the shortened model year 1942 (until February 1942), the Americar models were continued almost unchanged; only the grille was now chrome.