Automotive manufacturer of United States from 1926 to 1931. 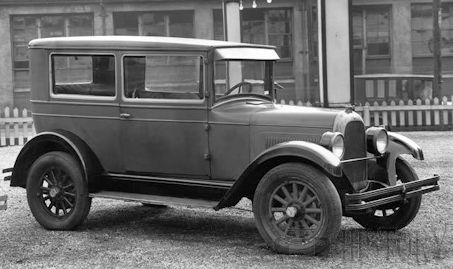 Whippet was an American automobile brand manufactured by Willys-Overland in Toledo, Ohio between 1926 and 1931 . The car was named after the English dog breed of the same name, and the radiator emblem showed a whippet leaping through a tire.

After completing production of the Overland vehicles in 1926, John North Willys wanted to produce a particularly small and cheap car. The result was a car with the shortest wheelbase of all US produced cars at that time only 100.25 "(2546 mm) in the fall of 1926. The model 96 had a four-cylinder engine with 2,196 cc, which made 30 bhp (22 kW) This car was available as a 5-seater touring car, 5-seater sedan or 2-seater coupe.

The cheapest Whippet, the four-cylinder cabriolet, was available in 1928 for $ 545, - less than the cheapest Ford . The prices of the other models ranged between US $ 615, - and 745, -, and so the Whippet 93A could be marketed as the cheapest six-cylinder of its time. Despite the low price, the cars had mechanical brakes for all four wheels and seven crankshaft bearings and recirculating-pressure lubrication in the engine.

For 1930 Light delivery vans to 1 and a half ton trucks and pick ups ,coupes and four passengers built.

All Whippet models were also manufactured and distributed in Australia by the Holden bodyshops, but with 21-inch instead of 19-inch wheels and minor changes to the body.

The collapse of the Wall Street Stock Exchange on Black Friday and the resulting global economic crisis, however, put an end to the brand: In the spring of 1931, Willys-Overland decided to discontinue the Whippet in favor of the Willys Six and the new Willys 77 the Whippet delivery vans continued into the early 30s with Crossley in the UK also supplied them . 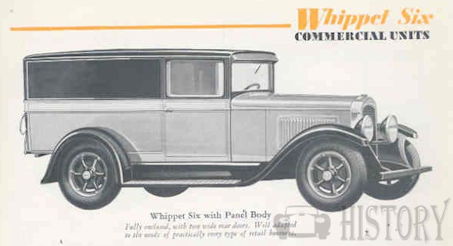