The Willys CJ (later Jeep CJ) (or "Civilian Jeep") is a public version of the famous Willys Military Jeep from World War II.

The first CJ prototype (the Willys CJ-2) was introduced in 1944 by Willys, and the same basic vehicle stayed in production through seven variants and three corporate parents until 1986.

A variant of the CJ is still in production today under license. The last CJs, the CJ-7 and CJ-8, were replaced in 1987 by the Jeep Wrangler.

By 1944, the Allies were confident the war would be won. This allowed Willys to consider designing a Jeep for the post-war civilian market. Documentation is hard to come by, but it seems that a Willys-Overland CJ-1 (for "Civilian Jeep-1") was running by May of that year. The CJ-1 was apparently an MB that had been modified by adding a tailgate, drawbar, and a civilian-style canvas top. None of the CJ-1s built have survived, and it is not known (at this writing) how many were buil 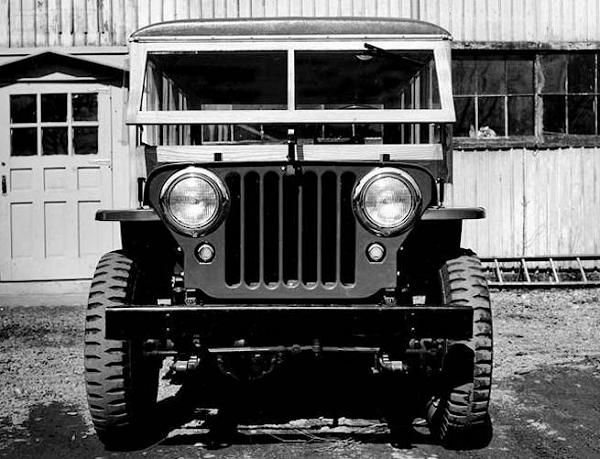 Although it bore the CJ name, the Willys-Overland CJ-2 was not really available at retail. The CJ-2s, also known as "AgriJeeps," were the second generation prototype for the first production civilian Jeep, and were used solely for testing purposes. It was directly based on the military Willys MB, using the same Willys Go Devil engine, but stripped of all military features, particularly the blackout lighting. They had tailgates, Power Take-offs ("PTO"s), engine governors($28.65),column-shift T90 manual transmissions, 5.38 gears, 2.43:1 low-range transfer cases, and driver's-side tool indentations. The earlier models had brass plaques on the hood and windshield that read "JEEP". Later models were stamped "JEEP" a la the familiar "WILLYS" stamping that appeared on the CJ-2A and later models. Some CJ-2s had "AgriJeep" plaques affixed to the dash. The spare tire was mounted forward of the passenger-side rear wheel on the earlier models and aft of the rear wheel on later ones. It seems that CJ-2s were distributed to "agricultural stations" for evaluation purposes. Of the 45 CJ-2s built, serial numbers CJ2-06, CJ2-09, CJ2-11, CJ2-12, CJ2-14, CJ2-26, CJ2-32, CJ2-37 and CJ2-39 have survived. Only CJ2-09 has been restored.

The lessons learned with the CJ-2 led to the development of the first full-production CJ, the 1945-1949 Willys-Overland CJ-2A. The CJ-2A looked very much like a civilianized MB with a tailgate and side-mounted spare tire. One major difference between the MB and the CJ-2A was the grilles of the two vehicles. The MB had recessed headlights and nine-slot grilles while the CJ2A had larger headlights flush-mounted in a seven-slot grille. In place of the MB's T-84 transmission, the CJ-2A was equipped with the beefier T-90 three-speed transmission. The CJ-2A was still powered by the reliable L-134 Go-Devil engine. Many of the early CJ-2As were produced using surplus military Jeep parts such as engine blocks and, in a few cases, modified frames. Some of the use of surplus parts was due to strikes at suppliers such as Autolite. Since Willys produced few parts in-house and relied heavily on suppliers, it was vulnerable to strikes. Unfortunately for Willys, strikes were common postwar. This undoubtedly contributed to low production totals in 1945 and early 1946.

Since the CJ-2A was primarily intended for farming, ranching, and industrial applications, a wide variety of extras were available such as: rear seat, center rear-view mirror(Stock CJ-2As came with only a driver side mirror), front passenger seat (Stock CJ-2As only came with a driver seat), canvas top, front PTO, rear PTO, belt pulley drive, capstan winch, governor, rear hydraulic lift, snow plow, welder, generator, mower, disc, front bumper weight, heavy-duty springs, dual vacuum windshield wipers (stock CJ-2As were equipped with a manual wiper on the passenger side and a vacuum wiper on the driver side), dual taillights (Stock CJ-2As had a taillight on the driver side and a reflector on the passenger side), hot-climate radiator, driveshaft guards, heater, side steps, and radiator brush guard.